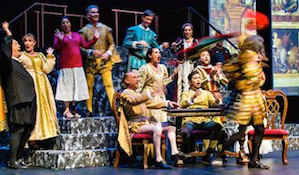 Musically impressive and theatrically patchy, the Livermore Valley Opera production of Rigoletto demonstrates once again what a powerful marvel of music drama this Verdi masterwork is. Even when the elements aren’t fully or consistently realized onstage, the fluidity, intensity, and agonizing beauty of the piece takes hold.

No opera is truly production proof, or should be. But this 1851 work, perhaps as much as any in the standard repertoire, unfolds inexorably, with its own intrinsic momentum and force. The listener witnesses it, on a first hearing or a 30th, with a thrilled, stricken sense of inevitability.

Even when you know it’s coming, the offstage reprise of "La donna è mobile" (Woman is flighty) in Act 3 breaks your heart, as a libertine’s carefree musing on the pleasures of sex becomes a father’s psychological death sentence. The Livermore Rigoletto reached its peak on opening night in this dreadful climax.

Baritone Eugene Brancoveanu, turning in one of his customarily assured and solidly executed performances in the title role, seemed both enlarged and obliterated by his emotions. His potent voice and lurking physical presence radiated waves of vengeful glee, self-loathing and despair. Soprano Kathleen Magee, whose initially nasal head voice opened up during the evening, glittered on the cusp of Gilda’s love-addled death.

Baritone Eugene Brancoveanu, turning in one of his customarily assured and solidly executed performances in the title role, seemed both enlarged and obliterated by his emotions.

Bass Philip Skinner filled out the act as the assassin Sparafucile, his rumbling low notes and lantern jaw equally menacing. Conductor Alexander Katsman, the company’s artistic and music director, summoned a late-night rain storm full of string gusts and woodwind chills in the pit. DeJean-François-Revon’s ungainly unit set of steps and platforms worked best here, without the overlay of projections used to excess in the first two acts.

Mounted at the handsome and acoustically friendly Bankhead Theater in bustling downtown Livermore, this Rigoletto made its musical claims early on. The 21-member orchestra sounded vibrant right from the start and remained so throughout, with particular suppleness in the woodwinds and judiciously applied muscle in the brasses. Krubitzer’s creamy tenor sold the Duke’s allure and vanity from his first lines. Brancoveanu tapped the smoldering watchfulness just below the surface of Rigoletto’s court jester facade, his voice charged with a grainy, driving edge. Bernardo Bermudez captured the Mantuan courtier Marullo’s bored corruption effectively. A luridly yellow costume, by designer Abra Berman, supplied visual amplification of the point.

Mounted at the handsome and acoustically friendly Bankhead Theater in bustling downtown Livermore, this Rigoletto made its musical claims early on.

Magee, as Rigoletto’s naive but romantically yearning daughter, was not so winning initially. She sang accurately if sometimes too cautiously — her "Caro nome che il mio cor" (Sweet name, you who made my heart), near the end of Act 1, was taken at too deliberate a tempo to make this great aria’s lilting filigrees pay off. But Magee, a Livermore hometown girl with New York City Opera credits, grew in vocal warmth and stature as the evening progressed. Her duets with the Duke and especially Rigoletto were often beautifully, caressingly done. The tender father-daughter confession in Act 2, Piangi, fanciula, was wonderfully tender and true.

The cast had some stellar acting moments. But the performances, in dramatic terms, were uneven and a bit undernourished. Rigoletto’s unraveling would have been even more striking if Brancoveanu had found a more sarcastic vein in his behavior. Krubitizer’s Duke needed to be more caddish and callow.

Some of Director Joseph Bascetta’s staging choices were ill-judged. Raising the curtain on the company during the overture and leaving the company frozen in place worked against the orchestral energy. The chorus scenes were clumsily staged. And where was the ladder that Rigoletto famously holds to aid unwittingly in the kidnapping of his daughter?

But by the time the midnight approached with chiming certainty in Act 3, this Rigoletto was powering away under Verdi’s propulsive hand. Everything from the smallest gesture to the music’s most wrenching spasms to the jagged bolts of lightning fell into place. Brancoveanu sang and played the discovery of his daughter’s murder with freshly felt pain. Magee carried off the difficult dying-swan measures.

For a moment, just before the curtain went down and the ovations began, the shock of what we knew was coming registered as a fresh surprise.