Gustav Mahler's Third Symphony is his longest work, and from Mahler, who was never brief, that's really saying something. It's six movements long and takes about an hour and three-quarters to perform. The Third requires a large orchestra, including eight French horns (who blast out the opening theme in unaccompanied unison) and four each of most of the other winds and brass.
Then there are two choruses (who only get to sing for four minutes in the middle of the symphony), plus a solo singer (who gets slightly more time than the choruses). This is the work that the Redwood Symphony, a nonprofessional volunteer orchestra, undertook to perform Sunday at the Cañada College Theatre in Redwood City, under its music director, Eric Kujawsky.

In fact, over its 23 years, the Redwood Symphony has performed all the Mahler symphonies before, and that may be one reason the hall was packed: The audience knew the orchestra could handle it and that listeners would get good value for their inexpensive ticket price. Another reason may be that, despite its length, the Mahler Third is not grandiose or forbidding. Along with his Fourth it's one of the most genial and welcoming of his symphonies. Yet its size keeps it from being often performed.

The Third is oddly structured. It begins with a massive (over 30 minutes) fast movement in the form of a march, continues with four shorter movements of varied character, and concludes with an equally massive slow movement, to which Mahler tacked on a grand but short coda when he decided to excise the original finale and save it for his Fourth.

Kujawsky and his orchestra emphasized the strong sides of Mahler's varying moods. The first movement in this performance was well-performed as the powerful march that is one side of its character. It was catchy and rhythmically driven, rather than alternately brusque and stymied as in some performances. The blind wandering interludes and long pauses were not lingered on, and the spooky parts for fluttering winds were less than spooky. Even the pianissimo bassoon tags sounded loud, and the tutti climaxes for full orchestra fairly blasted their way out of the hall. Sections of complex counterpoint gave a superbly furious impression of controlled chaos.

This made an interesting echo to the extremely brief (lasting, indeed, fewer seconds than Mahler's minutes) Fanfare for Louisville by Witold Lutoslawski that opened the program, a work that is basically an aleatoric squawk for brass supported by winds. The Fanfare was led by assistant conductor Kristin Turner Link.
Brass in Fine Fettle
Mahler's first movement gives a fairer chance for brass players to show their quality. The Redwood Symphony's brass, often its weakest section, put on a special effort here. The horns were full and fat, with few cracked notes and mostly on pitch, and the heavy brass also shone, especially in principal trombone Garo Gagliano's long solos. He stood up to deliver these, and they carried over any attempt by Mahler's orchestration to drown him out. 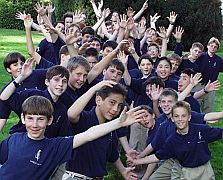 The first movement, then, was one of the highlights of the concert. The other highlight was the Carol of the Bells–like choral fifth movement. There was no room for even one chorus, let alone two, on the crowded stage, so the Peninsula Women's Chorus came down the far aisle (against the wall) on the audience left during a break between movements, and the Ragazzi Boys Chorus similarly on the right.

Their conductors, Amy Hunn and Kent Jue, respectively, set up their music stands in the two middle aisles facing their singers, but kept one eye for cues on Kujawsky (who remained facing the orchestra). It was a complex arrangement, but it all came out well. Nothing broke down, and the voices were strong and cheerful. The intended antiphonal effect might have worked better for those seated closer to the center than I was.

The other singer in this movement, and in the hushed stroke-of-midnight song forming the previous movement, was mezzo-soprano Theresa Cardinale, who stood in the customary spot on stage next to the conductor. She too had a strong voice and, after taking a moment to settle down in the rhythm of her song, matched up well with the orchestra, and also in the next movement with the choruses, which chide her grief.

The rest of the symphony was notable mostly for its solos. The particularly outstanding one came from offstage in the third movement. Mahler scores this long, lyrical melody for the posthorn, but that rare instrument is not often used. Here Larry Heck gave a fine imitation of the posthorn's low and mellow sound on an ordinary C trumpet over hushed strings. Throughout the symphony there were notable wind solos, as well — oboist Peter Stahl can be singled out here — and the many violin solos were given in good rhythmic form by concertmaster Heather Katz.

The general overall impression varied. However well the players performed in the first movement, the gentle lilt of the second movement eluded them. The intonation was poor here, and the orchestra sounded fully like the nonprofessional ensemble that it is. The third movement improved, both in the trumpet solo and in the faster parts elsewhere in the movement. The two vocal movements were carried by their excellent singers.

The final slow movement was, again, somewhat problematic. By this time even the brass were tiring out and dropping notes, but the music still had flow, and the Redwood Symphony showed its true quality by summoning up last reserves of energy and giving magnificent grandeur to the coda. It was a long journey, and they all made it to the end together.