There are few plays as firmly in charge of their own stage destiny as Shakespeare's Midsummer Night's Dream. It's all in the text, of course, but also in the style of the piece, with its shimmering, playful way of intermingling spirits and mortals. Significant alteration is not really feasible, so writers and composers must follow Master William's playbook. 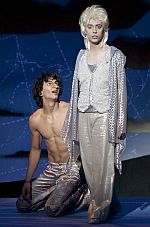 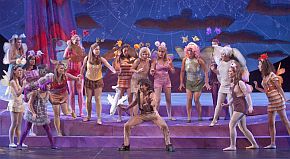 The opera version (to a libretto by Benjamin Britten and Peter Pears) favors the rustics more than the play. Their rehearsal and performance of the play of Pyramus and Thisbe takes up as much time as the rest of the action. And the four pairs of lovers (Oberon-Tytania, Theseus-Hippolyta, Lysander-Hermia, and Demetrius-Helena) handle their spats and bliss in short order. 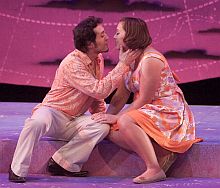 Conducted and directed by Michael Morgan, the opera's romantic first act, comic second act, and all-out carnival third act flew by, entertaining and delightful. Codirector and choreographer Mark Foehringer contributed decisively to the action — and there was lots of it. If the music falls somewhat short of the gravitas of other Britten works, mark that up to the nature of the piece. Musically, there are only a few sweet, Mendelssohnian moments. Mostly it's a lithe soundtrack accompanying the action, albeit it's a score by Britten, every inch of it. 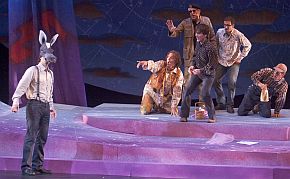 Vocally, countertenor William Sauerland's quiet, self-assured Oberon and Kirk Eichelberger's Godunov-sized Bottom dominated the performance. Sauerland, formerly of Chanticleer, but now singing in London, was made to look like the Little Prince's older brother. That didn't harm the performance, but his frequently debilitated stage manners did.

Ani Maldjian stepped into the role of Tytania, replacing the originally scheduled Marnie Breckenridge, and made a strong impression both dramatically and vocally, showing the making of a "helden-soprano" (if there is such a fach). 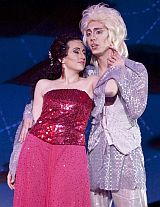 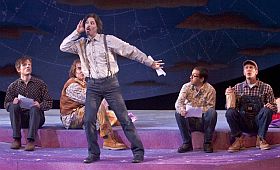 Bottom, incidentally has the best possible advice to young singers: "I will not stir from this place, do what they can: I will walk up and down here, and I will sing, that they shall hear I am not afraid."