I had to pinch myself. Nearly 200 schoolchildren at a string quartet concert listening to Bartók, and they're quieter than an equal number of old fogies like myself? Am I dreaming? Or did the Cypress String Quartet do mass hypnosis at the 19 schools it visited in the last three weeks before coming here to the Yerba Buena Center for the Arts? But no child was sleeping, and the many I asked after the concert said they liked all three pieces on the program, two of which, the Bartók Sixth Quartet and a new work by Kurt Rohde, are hard nuts to crack. In fact, Rohde himself told me that his highly dissonant (and expressive) Gravities was "chock full of nuts." 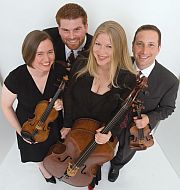 So the Cypress has been working magic, and there's hope for the future of classical music, despite soothsayers of demographic gloom and doom who decry graying audiences. What the Cypress has been up to is its Call and Response Program, in which it commissions new works for quartet (the "response"), inspired by "searching for connections across musical, historical, and social boundaries" (the Quartet's "call"). The group then gives a series of outreach presentations and public performances. This year, the ensemble finally got around to honoring its first local composer. Rohde was given a list of quartets in the Cypress repertoire and was asked to pick two to respond to with his own composition.

Rohde picked the Haydn String Quartet Op. 77, No. 2, in F Major, and the Bartók because they were the composers' last works in the form, and because they had such a tremendous influence on so many contemporary and future composers. Contemplating these and other influences ("gravities") on the creative act gave Rohde his title. In the first movement of Gravities, "Undertow," the influence propounded is internal to the music itself, how "rhythmic forces rise up from inside the music and slowly overtake or influence the flow of the predominating melodies," according to the composer. The melodies referred to are played (in part) in unison, the recurrent passages of which form a ritornello that makes the movement seem like a Rondo.

For his second movement, "Doubt," Rohde credits its influence to the late Andrew Imbrie, his composition teacher. The movement begins with viola (Rohde's own instrument) with pizzicato accompaniment, and moves through various sections to a powerful climax of passionate polymelodies before quietly ebbing away at the end. The third movement, according to the composer, characterizes the "pull" of the dance as the influence. Various rhythmic cells in a motoric context are designed to make feet twitch, and do so to some extent — within a perhaps too sophisticated texture to reach the primitive instincts that Stravinsky was so adept at provoking.

In all, the Cypress performed the difficult Rohde exceedingly well. The second movement especially does credit to the composer; I hope it becomes widely disseminated. Before intermission, the Bartók also received its due from the Cypress, highlighted by the gorgeous solo viola of Ethan Filner in the first movement and fine ensemble coordination in the tricky "Marcia" and "Burletta" movements. By contrast, the opening Haydn seemed a little rough-edged. Was too much rehearsal time devoted to the rest of the program? No matter. The miracle that so much high-quality music from three centuries was able to reach interested and engaged young people deserves a deep bow.