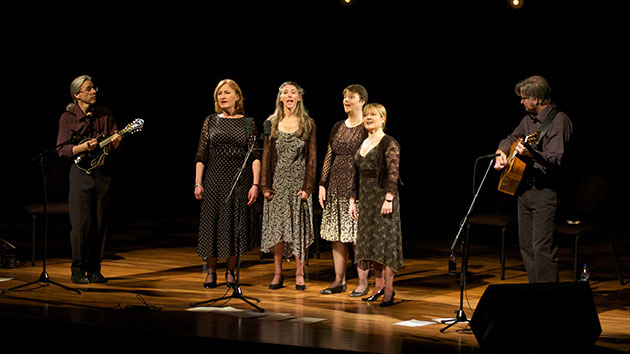 The Civil War has been described as a musical war. It's easy to see why. At the time, it is estimated, one out of every 1,500 households had a piano. Soldiers from both North and South brought a proud lineage of songs with them marching into battle or in encampments.

This music was the focus of the four-woman group Anonymous 4 during its appearance at the Mondavi Center on Friday evening. This group, founded in 1986, is best known for performing music of the medieval era. But on Friday it proved that American song is thoroughly in its wheelhouse.

The women – Ruth Cunningham, Marsha Genensky, Susan Hellauer, and Jacqueline Horner-Kwiatek –   arranged the songs and were joined by instrumentalist Bruce Molsky, who alternated on banjo, fiddle, and guitar. His contribution proved crucial, adding a deeper dimension to the music.

Anonymous 4 chose songs that would have been performed in 1865, during the final year of the Civil War. This is music that reflects a time when soldiers had grown weary. The lyrics reflect not anticipation of victory but the desire to return home. There is melancholy to much of the music, revealing a strong sense of weariness, loss, and deep longing.

Not surprisingly, the music had a strong undercurrent of anti-war sentiment, too. Anonymous 4 performed it with emotion and loving care.

Next up was "Darling Nelly Gray." Written a year after war ended by B.R. Handy, who was active in the Underground Railroad, the song is based on an actual event: a runaway slave hoping to raise money to win the freedom of another named Nelly Gray. Did the group sell the longing and the sadness and futility of such a cause? Yes, but there was no bathos: It was straightforward singing.

No program  of songs from this era would be complete without one by the most successful composer  of the day, Stephen Foster. On Friday, this song was "Hard Times Come Again No More," with Molsky accompanying on the fiddle. It is a rarity in the Foster canon with its strong sense of political protest.

The highlight of the evening came with one of the best known songs from the era – and one of the finest anti-war songs ever written –  Walter Kettredge's "Tenting On the Old Campground." It was performed with a certain economy, the group avoiding the temptation to oversell it.Hearing it in a country now seemingly in a state of perpetual war was chilling.

"Aura Lea," whose melody was the basis for Elvis Presley's hit “Love Me Tender,” was delectable, with mezzo-soprano Horner-Kwiatek singing solo and mining a great amount of poetry from the melody. But the group rescued some songs from obscurity, such as Henry Clay Work's "The Picture On the Wall," from 1864.

The concert was scheduled for the large Jackson Hall, with the musicians performing in front of microphones. The smaller Vanderhoef Theatrewould have been a more appropriate venue, a mistake that shows the Mondavi Center could have better thought through the presentation. After all this is intimate music, performed for a small audience. And there was certainly no need for the lights to flicker for effect during three of the songs. The wonderful performers were enough in this concert: no frills needed.