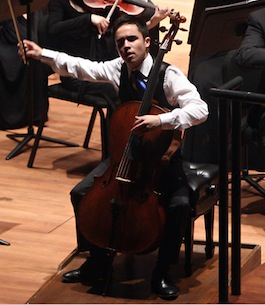 For centuries, composers have proven that no one writes in a musical vacuum. And so it seems there really is nothing new under the sun. Or is there? Sometimes, you have to ask yourself whether new is new because it is new — and not new because it is a synthesis of older works or influences.

This was a question that hovered in the air during cellist Jay Campbell’s Debut Series recital at the Mondavi Center’s Vanderhoef Theatre, on Sunday afternoon. Campbell and pianist Conor Hanick proved up to the task of posing that question in an adventurous program that included Beethoven and John Zorn, among others. It was Campbell’s stated intention of performing works that referenced previous ones. But this was no concert where you got a royal sense of the unbroken thread that runs from Bach to Zorn. The musical programming mise-en-scène took care of that.

This concert gave the audience a sense that works stand on their own — musical history and influence be damned. The concert began with Beethoven’s seven variations based on a theme from Mozart’s opera The Magic Flute. Here Campbell was able to connect with some of the brawny significance and brooding mood that Beethoven wrote into these variations. Campbell and Hanick managed to make this work uber-colorful and made it sound contemporary.

The most daring work on the program followed, which was Matthias Pintscher’s Uriel, written in 2013. The German-born Pintscher is a professor of composition at the Juilliard School, where both Campbell’s and Hanick’s musicality were formed. Pintscher is also music director at Ensemble Intercontemporain — which should give you an idea for the passion he has for musical convention.

Here was an instance where an accompanist proved as much a standout as the artist whom he was accompanying.

In this work, Campbell and Hanick are charged with blending musical lines and separating them. Naughty glissandos and massive chords are part of the paradigm. Campbell proved an astute interpreter of this contemporary music. The cello lines written in the work are telekinetic ones. And Campbell did not shrink in the interpretation. He made his cello sound like an electric guitar; it was as if Pintscher’s composition encouraged Campbell to fall down a rabbit hole where he could freely channel the tactile artistry of, say, Sonic Youth guitarist Thurston Moore.

Hanick, in turn, captured the thunderous incantations written for the piano. Here was an instance where an accompanist proved as much a standout as the artist whom he was accompanying.

The first half of the concert concluded with a finely shaped performance of Debussy’s Sonata in D Minor for cello and piano. An homage to Couperin and Rameau, this work blends the tonal with shadows of atonality. In the opening bars, Campbell went all in to sell the color of the musical line. This piece proved well suited for Campbell, who does not own the boldest sound at the cello. Rather, his cello playing reveals a certain taste for clarity, a certain draftsman’s passion for detail.

Campbell gave the opening movement a deep sense of poignancy. It was performed without affectation, but never coldly.

The highlight of the second half of the concert was an in-your-face performance of Zorn’s Occam’s Razor, written for Campbell. The piece puts the cellist to the test. Whereas the Debussy demanded finery and fluidity, as well as a sense for color, Zorn’s work asked Campbell to play both boldly and unconventionally. Think “musical jump cuts” and “violent finger plucking of strings” and you’ll get a taste of the cellist’s work here.

The composer has said that the work references Bach. As such, it offers 12 canons. However, in Zorn’s mind, canonical approaches are used for chaos. The music is stripped to its barest essence. Despite Zorn’s intentions, the work is best taken on its own — as a new idea — without thinking of musical references.

The second half of the concert also produced a delectable performance of Stravinsky’s Suite Italienne for cello and piano. This came across as the most self-referential work performed Sunday.

Sure, the sounding was new over the work’s six movements, but the 18th century was always evident in the musical DNA. Campbell gave the opening movement a deep sense of poignancy. It was performed without affectation, but never coldly. The following movements revealed Campbell’s artistry at mixing emotion with clarity.

At concert’s end, the question the musicians left the audience with had as much to do with what the new looked like as what it sounded like. Because Campbell did not give much information about the works he performed, this forced some audience members to huddle around the sheet music on his music stand, after the concert.

The one piece that inspired the most interest? The one that saw most people reach for the musical score and thumb through its pages? It was the newest-sounding work of the evening: Matthias’ Uriel.