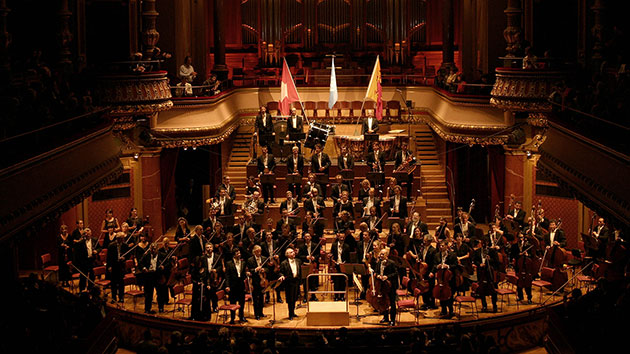 Some European orchestras, like the Geneva-based Orchestre de la Suisse Romande, own a storied history but fly way below the radar in the U.S.

That status for the OSR is due to change.

The reason has a lot to do with performances like the one this 112-member orchestra gave Friday evening at the Mondavi Center at UC Davis, during a much overdue tour of the U.S.

With fellow countryman Charles Dutoit conducting, this Swiss orchestra delivered a potent and electric evening of music fully within its wheelhouse – French and Russian music of the 20th Century.

In doing so, the orchestra was joined by standout Russian pianist Nikolai Lugansky who gave a powerhouse performance of Rachmaninov's Rhapsody on a Theme by Paganini.

In a way, this orchestra founded in 1918 is one of many whose vibe was killed by the internet. In the mid-20th Century it held a stellar reputation for its LP recordings of works like Ravel's Daphnis et Chloé and La valse.

But the decline of brick-and-mortar record shops and reduced U.S. touring have not been kind to this orchestra's visibility.

The orchestra, in fact, has not toured the U.S. since 2003. Here in California, the orchestra has been even more invisible: The OSR's last performance in the Bay Area was in 1987, and on Friday it made its first-ever appearance in the Central Valley.

As far as personalities go, the OSR is no shrinking violet. Excellent winds and brass are touchstones. For the past few years in Geneva, Neeme Järvi has led the OSR. However, Dutoit is a frequent guest conductor – and Dutoit's appearance with the orchestra at the Mondavi Center proved that the relationship is a good fit.

The concert began with a finely shaped though unremarkable performance of Debussy's 3-movement Ibéria, from Images pour Orchestre.

Throughout, Dutoit shot for clarity over affectation – an approach that made all the performances in the evening’s program stellar.

A well-trod plum for the potent pianist followed – Sergei Rachmaninov's Rhapsody on a Theme of Paganini. Lugansky performed this work with an intuitive sense of when to light the fuse on a very powerful musical explosive and when to make the piano play like a whisper.

Against the clarity and bright sonority of the orchestra, Lugansky resurrected this work from the depths of familiarity. He made Rachmaninov's 24 variations sound telekinetic. Some of his approach verged on the violent – but it was a violence of pronounced exactitude.

Like the orchestra, Lugansky is known for hyper-clarity in his playing.  Best of all, there were seemingly moments of lost self-awareness when he was attacking the keyboard.

The great charm of this orchestra and the eloquence of its musicians were revealed during Stravinsky's The Song of the Nightingale. This symphonic poem woven from the second and third acts of the opera of the same name was later turned into a ballet. The work can best be described as a book whose darkly iridescent passages exist in oddly constructed chapters. The chapters are way more satisfying than the whole. Stravinsky, with an odd sense of humor and artistry, proves that sometimes the whole is unnecessary.

Dutoit conducted it with restraint, letting the musicians draw out color. In Nightingale, the brass and woodwinds, especially the flutes, were stellar.

The concert was brought to a close with an electric and über-powerful reading of Ravel's Suite No. 2, Daphnis et Chloé. Here, Dutoit shot for a dramatist's approach – where detail and nuance seed an environment for power and drama to follow – that was well suited to Ravel's daring work.

OSR flutist Robert Thuillier thrilled with excellent playing in the second movement’s extended flute passage, which is as poetic as it gets in the French orchestral repertoire. Yet, the orchestra never let its affinity for nuance slip away, even with all the pumped-up sonority as it evolves toward its climax.

The OSR certainly put a shine on the Mondavi Center audience. Dutoit was called back for three bows. He did not offer an encore.

He did, however, go a long way to saving this notable orchestra from the relative obscurity that existed before it appeared Friday evening.