Music in the Vineyards
Comments 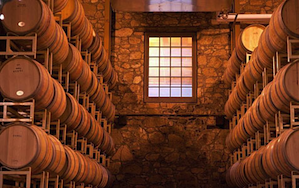 Chamber music is probably not the first thing that springs to the minds of barrel-room visitors at Markham Vineyards in St. Helena. True to its name, two sides of the large rectangular space are lined floor to ceiling with 60-gallon oak barrels filled with Napa Valley’s finest. The floors are concrete, the walls are stone, and the wood ceiling is both high and peaked.

These features, so conducive to storing wine, are also suitable for containing small groups of musicians. For the Aug. 14 Music in the Vineyards concert, the small group was the estimable Ortelius Piano Trio, perched atop a makeshift stage at the far end of the room. They were easy to see and hear, unless you happened to be sitting behind one of the four posts tasked with holding up the roof. Even then, the unobstructed sound more than compensated for the compromised sightline in the nearly full-house.

As to the sound, it was both resonant and full, to the particular benefit of the cello. In contrast, the piano was at times muddy, as if overcome by all the overtones bouncing off its fully open lid. The violin was somewhere in between, sweet at the mid-ranges but lacking brilliance in the upper registers.

The opening movement was flawless, and the second was both liquid and translucent ... the set demonstrates that Beethoven could pull any number of rabbits out of the most downtrodden hat.

The opening movement was flawless, and the second was both liquid and translucent. The real payoff, however, came in the final movement, a set of nine variations on a then-popular aria by the long-forgotten Joseph Weigl. If nothing else, the set demonstrates that Beethoven could pull any number of rabbits out of the most downtrodden hat. He keeps finding new magic in the insipid tune, hinting that he could go on forever.

The Ortelius made each variation distinct and memorable, from the piano’s light touch in the first, to the tragic aspect of the fourth, followed in turn by the energetic, the heroic, the ecstatic, the changeable and the triumphal.

Like the Beethoven variations, 30-year-old Dan Visconti’s Lonesome Roads consists of short vignettes — seven this time — linked by a common theme, in this case the bluesy backbeat of America’s two-lane highways. The work begins with a hushed piano solo, followed by harmonics in the strings, all of which serves to evoke a sunrise. The plucking of both the strings and the piano in the second vignette is pure blues, complemented by a rock-inspired frenzy in the third.

In the fourth, the pianist strums his instrument, then turns it into a drum, tapping on various surfaces. The fifth employs more harmonics and glissandi, here evoking distant bird cries. The concluding vignettes begin slowly but then accelerate into a tremendous rollicking rhythm, with all three musicians playing at lightning speed. The effect was visceral and mesmerizing, leading to loud cheers at the end.

During intermission, the audience sampled and perhaps purchased some of the wine that had been looming over them in the first half. Now in its 19th year, Music in the Vineyards has established a lasting symbiotic relationship with local wineries, particularly those with resonant barrel rooms.

The Ortelius' playing was assured, perceptive, and mostly well-blended ... Barltrop and Roman delighted in trading gorgeous phrases, all the while building up a tremendous expectancy.

Newly fortified, the crowd returned for one of the staples of the repertoire: Beethoven’s “Archduke” trio. With performances such as the Ortelius’, the work is destined to remain a staple for many years to come. Their playing was assured, perceptive, and mostly well-blended. As noted above, the piano was sometimes boomy; perhaps lowering the lid to half-mast would have helped.

In any case, all three players seemed to grow into the music, letting Beethoven’s narrative unfold at its own pace. The repeated iterations of the theme in the opening Allegro grew more meaningful and expressive at each appearance, and the subsequent Scherzo was played with carefully controlled intensity. The slow drift of the Andante cantabile third movement was the highlight of the evening. Here Barltrop and Roman delighted in trading gorgeous phrases, all the while building up a tremendous expectancy. They carried that restraint into the final Allegro, not letting go until the blazing Presto at the end.

Music in the Vineyards continues until Aug. 25. Several concerts are already sold out, but a few spots are still available. It’s well worth the trip.