The Ring of Richard Wagner's four-opera, 15-hour Der Ring des Nibelungen"is an instrument of pure evil. It represents extreme greed and the drive for absolute power. This Ring corrupts and destroys its owners, be they dwarfs, giants, heroes, gods or, at the end, in the flames of The Twilight of the Gods, the old world order itself.

Wotan (Mark Delavan) falls under the spell of the Ring

If there is one entity that has consistently resisted the curse of the Ring it's the San Francisco Opera, which has done well with this gigantic enterprise ever since 1935 (in a production conducted by Artur Bodanzky and featuring Friedrich Schorr as Wotan). Since 1990, the Ring in San Francisco has been under the musical direction of Donald Runnicles, and — except for and disappointing tenor here, a too-large soprano there — all has been well with Wagner's world.

As so it was tonight, at the premiere of Das Rheingold, the first part of the company's so-called "American Ring." Except for a few curious brass bloopers, Runnicles' orchestra played majestically, providing a grand balance, favoring singers well, and offering musical interludes of unostentatious power, the like of which haven't been heard in the War Memorial since Runnicles' fabulous sea interludes in Peter Grimes. 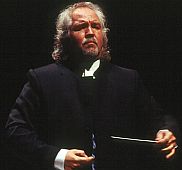 And on the stage the gorgeous music of Das Rheingold was excellently served. All eyes and ears were on Mark Delavan, in his role debut as Wotan, and he sang well — accurately, with beauty of tone and fine diction. Assured but not quite with the required gravitas, this was a good debut, promising even better performances to come.

I suspect a more stunning Wotan debut might have come from Italian bass Andrea Silvestrelli, whose Fasolt befitted a giant in every way. Austrian bass Günther Groissböck's Fafner was an impressive equal to Silvestrelli. These were giants not only with big voices, but "singing big." 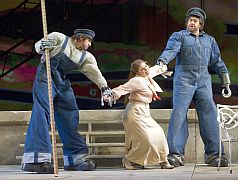 Stefan Margita's Loge was a thrilling example of effortless, effective singing, letter-perfect in every way; the man owns the stage, without making a big deal of it. Richard Paul Fink's Alberich was a triumph, powerful vocally and dramatically. Jennifer Larmore's Fricka sounded crystal-clear and her acting was first-rate. David Cangelosi's Mime was flawless, while Jill Grove's big-voiced Erda was not — one whole phrase went to an unexpected place.

Right from beginning of the opera, there was good news, the three Rhinemaidens — Catherine Cangiano, Lauren McNeese, and Buffy Baggott, all in San Francisco debuts — looking, moving, and singing as stars, in these secondary roles.

Though the roles for Froh (Jason Collins) and Donner (Charles Taylor) are short (much shorter than those for the three women), these two debuting artists acquitted themselves splendidly when their "ariosos" arrived. Adler Fellow Tamara Wapinsky's Stockholm-syndrome Freia (the abducted goddess apparently becoming fond of Fasolt) was otherwise well-perturbed by her misfortunes.

As somebody apprehensive about the advertised "Americanization" of the Ring, I was much relieved by the fact that Francesca Zambello did no such thing — not, at least, so far. We'll see in 2010 if it's a Yankee Walküre, and then in 2011, some kind of New-World Siegfried and Twilight of the Gods, heaven forfend. 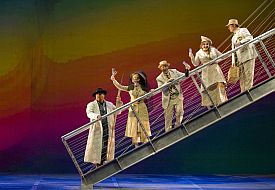 The Gods depart for Walhalla (on a bridge recycled from Appomattox)

This "Rheingold" is modern-dress, clean, and clear, not bogged down in a misguided attempt to outdo Wagner. OK, so Alberich looks like a prospector from the Gold Rush days, and there are projected images that may be from the Sierra Nevada. Catherine Zuber's costumes are a mix of Noel Coward, corsets, a sailor hat, some high-button shoes, flannel clothing and double-breasted blazers and straw boater hats. And yet, in Europe, this would be regarded as excessively traditional.

Jennifer Larmore as the fashionable Fricka

Michael Yeargan's clean and simple sets, against Jan Hartley's grand video projections (was the opening sequence from outer space or through a birth canal or both?) were fine by me, and kept the stage open — a far cry from the idiotic obstacle course some European designers put the singers through. Zambello making the un-empowered, apple-less gods sit through a long scene didn't make much sense, but otherwise her direction was fine.

And, let's hear it for union power and AGMA! The thick, San Francisco-style fog descending time and again is a mix of liquid nitrogen and heated water — just harmless vapor, not the troublesome stage fog of years past.

Safe fog covers Alberich, as he transforms himself into a serpent