“This collaboration is what I’m in it for,” declared the clearly delighted soprano Ann Moss, with a sweeping gesture that took in her fellow performers and the audience at the Noe Valley Ministry on Sunday afternoon. 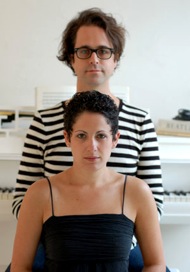 In fact, the acronym of the new-music repertory group CMASH, showcased in this delightful concert, stands for a collaboration between genres: Chamber Music Art Song Hybrid. And sharing, it became evident, was essential to both preparation and presentation of the afternoon’s material, as entertaining as it was artful.

The oldest piece was the opening Preciosilla, Virgil Thomson’s 1948 setting of one of Gertrude Stein’s heady streams of consciousness. Moss, the sole vocalist, and present throughout the program, right away deployed the brightness and vibrancy of her instrument, handsomely accompanied by pianist Steven Bailey in what seemed like Thomson’s homage to Handelian oratorio, played out in arpeggios and secured with majestic chords under Stein’s run-on lines.

Composer Jake Heggie, a sometime participant in this Noe Valley Chamber Music series and resident of the neighborhood, supplied the four Songs & Sonnets to Ophelia that followed the Thomson, as well as the lyrics to the first of the four, the others coming from Edna St. Vincent Millay. Here, both Moss and Bailey displayed their command of a demanding breadth of dynamics, and Heggie’s familiar skill in conveying and complementing a lyric was in evidence.

Speaking between offerings, Moss pointed to the rewards of “two composers working together” on Weslie Brown’s Candlelight Café, for which CMASH director and composer Liam Wade both collaborated with Brown on the arrangement and played bass for this premiere. The romantic lyric, though not melodically remarkable, was prettily arranged for Moss and the other two members of the One Art Ensemble, violist Alexa Beattie (another CMASH director) and pianist Hillary Nordwell.

Wade’s own setting of three dream studies by CMASH poet in residence Lisa DeSiro provided Moss with the sort of dramatic material to which her striking Piaf-like physical presence and her secure, high-ranged singing voice are both extremely well-suited. The first of the program’s several tangos added spice to the Food dream, with Beattie stirring up a jazzy figure on viola.

On display in the lobby during intermission was the late Cathy Berberian’s 1966 graphic score for the program’s next piece, Stripsody, full of comic-book exclamations and doodles evocative of those created by Beatle John Lennon a couple of years earlier. A fragment of a Beatles song was indeed among the few per se musical elements in Moss’ solo performance of Stripsody, along with a quote from Verdi’s “Sempre Libera.” Delivering hypoglycemic grunts and cries and at one point channeling Frieda from the Peanuts comic strip, Moss confirmed that her speaking voice is as clear and engaging as her singing, and that she can effectively tickle an audience’s funny bone.

The One Art Ensemble returned for a premiere of two songs by Vartan Aghababian. Singer and instrumentalists proved how expressively and empathetically they handle even material that isn’t as pretty or creative as it might be.

Much more memorable was Weslie Brown’s Practice Your Flamenco, with Moss accompanied by guitarist Luke Aaron Mayer and evoking the airy majesty of Joan Baez, whom she also rather resembles, physically and vocally. At the close of this piece, which was repeated in an encore, Brown (who was present) was properly applauded by the nearly full house for her attractive romantic lyric, her gorgeous melody, and her tasteful incorporation of guitar breaks and an exquisite extended coda.

Introducing his 4 Poems By Edna St. Vincent Millay, which ended the program, Liam Wade said more about the fruits of collaboration, picturing himself and Moss poring over hundreds of pages of the poet’s verses to choose those presented here by Moss and the Hausmann Quartet, currently in residence at San Francisco State University. Wade made full and engaging use of this top-notch ensemble, employing glisses from violinists Isaac Allen and Bram Goldstein on “The True Encounter” and establishing strong lines for both strings and singer on “Hyacinth.” The quartet got a firm hold on the muscular melody of “Burial,” underneath Moss’ affecting incantation of the rather creepy lyric. The piece de resistance was the final poem, “Recuerdo,” with Moss at first accompanied only by the soulful Angela Choong on viola, then the other players entering stunningly in stages, later giving way to a lovely a cappella section for Moss, and finally springing a hilarious vocal count-off by violinist Allen. Wade’s luscious voicings brought to mind Kurt Weill and suggested that there’s no reason why good chamber music can’t also register as fine art song or splendid cabaret.

Some of this program will by reprised by the One Art Ensemble at Old First Church on April 30.