concerts, and the Philharmonia Baroque Orchestra made sure he lived up to the billing. In giving their all to two substantial works — the Cello Concerto No. 2, with an intense Steven Isserlis as soloist, and the (mostly) absorbing Symphony No.43 (“Mercury”) — Music Director Nicholas McGegan and his nimble band proved yet again why this prolific composer offers a seemingly inexhaustible supply of musical discoveries and delights.

It’s not often that Mozart plays a supporting role. But so he did with the curtain-raising Symphony No. 17, composed in his teens. The busy but ultimately bland Symphony No. 8 by Frederick William Herschel filled out a program heard at a packed Herbst Theatre on Friday evening.

Isserlis, a first-rate international star, dove into the D-major concerto and held nothing back. A dramatic presence onstage, with a cascade of curly gray hair, intently staring eyes, and a penchant for wielding his bow like a swooping sword when it flies off the strings, this master cellist commands attention. It’s anything but an empty show. After a somewhat splatty orchestral opening, Isserlis voiced his opening subject with a laser-keen focus. Things stayed pretty hot throughout.

Everything he did got almost feverishly close attention — whirring trills and deeply struck double stops, dynamic shifts, and a dramatic pause before a ferocious cadenza. As the Allegro gained momentum and complexity, Isserlis ventured into the kind of impassioned territory that Dvořák or Tchaikovsky might elicit. It was daring, exciting, and arguably a bit much at times.

Any apprehensions that Isserlis might never take his foot off the capital “R” Romantic pedal were set aside by a serene and lucidly phrased Adagio, crowned with a choice, musing cadenza. McGegan went at the finale attacca fashion, which heightened the movement’s sense of jolly, spontaneous celebration. The soloist joined in fully, by turns playful and pungent, tossing off meaty big chords and fiery torrents of passagework.

While McGegan and the orchestra didn’t exactly recede through the piece, there was a clear sense that this performance was largely about the soloist. Verging close to (and achieving) overkill more than once, Isserlis gave a fully committed, lean-in account of the part that won’t soon be forgotten. He followed it with an achingly beautiful encore of the Catalan Song of the Birds, in tribute to Pablo Casals.

The other big impact of the night came in Haydn’s “Mercury,” which got a lithe and articulate reading by McGegan and his forces. If most of the musical interest was front-loaded in the first two movements of this symphony, that was more than enough. Sounding both limber and muscular, the orchestra captured the opening Allegro’s sense of striding, exuberant eventfulness. The repeats paid off. The development was keenly, excitingly argued. The horns added amusing little puffs here and there. McGegan kicked in some jaunty syncopation.

Just as fine, in a different temperament, was the Adagio, which seemed to expand into breathing naturalness over the pulse beat in the lower strings. The easiness of it all flowed into something mordant, even regretful, with stabs of real pain felt before the mood lightened. If not exactly afterthoughts, the final two movements paled by comparison. 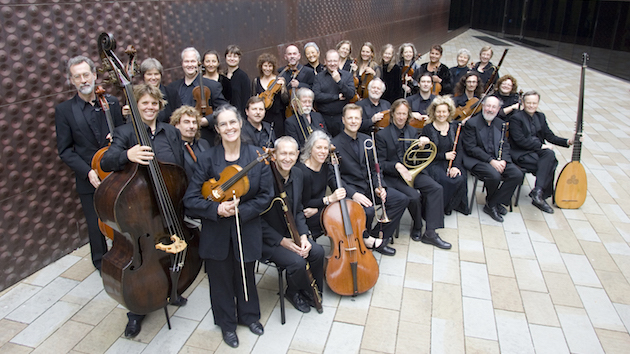 The concert, which ran past two hours, was perhaps too much of a largely good thing. Intriguing as it is to note that Herschel took time off from composing to discover the planet Uranus, his Symphony No. 8 kicked up a fuss to little sustaining purpose. A creepy-crawly subject in the first movement led to a lot of sideways fuddling around. The very brief Andante was over almost as soon it got started. More agitation and a few insistent declarations marked the closing Presto.

Mozart, even as a teenaged apprentice, could make something out of not very much. A tightly compressed six-note figure in the opening movement of his Symphony No. 17 got an ingenious workout. The strings measured out the sweet Andante in pleasingly rounded spoonful phrases. Two tooting horns gave the closing Allegro the comic momentum of an early morning fox-and-hounds episode.

The real prey was still to come, with Isserlis waiting in the wings to go after the Haydn concerto with every weapon in his mighty arsenal.