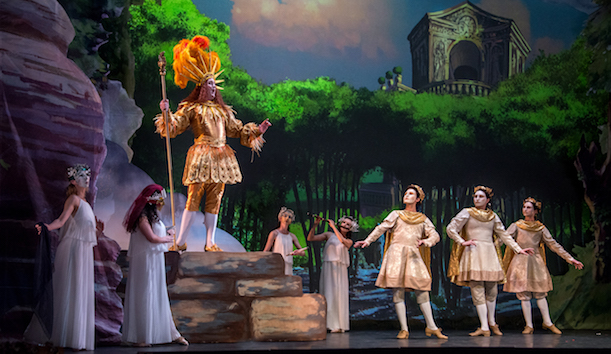 “Spectacle” gets a bad rap in the arts. The term is often meant to indicate there’s more flash than substance in the work at hand.

To call this weekend’s dazzling, three-hour production of Jean-Philippe Rameau’s 1745 opera-ballet Le Temple de la Gloire at Berkeley’s Zellerbach Hall a spectacle comes close to underselling it. Brimming over with the splendors of this taut but lushly expressive French Baroque score; a formal but moving text by Voltaire; diverse solo, ensemble, and choral singing; poised and sensual dance; delectable costumes; painterly backdrops and projections; and for good measure a quizzical ostrich in the final act, this joint endeavor by Cal Performances and Centre de musique baroque de Versailles gratified on multiple levels.

Gorgeous to behold and wondrous to the ears (despite some vocal shortcomings and the daunting size of the house), the piece proved to have a deeper moral dimension beneath its simple storyline crafted in the service of Louis XV, who attended the premiere. In its instructive tale of glory-seeking, Temple settles not on power or earthly pleasures as its measure of success, but rather grace and mercy. 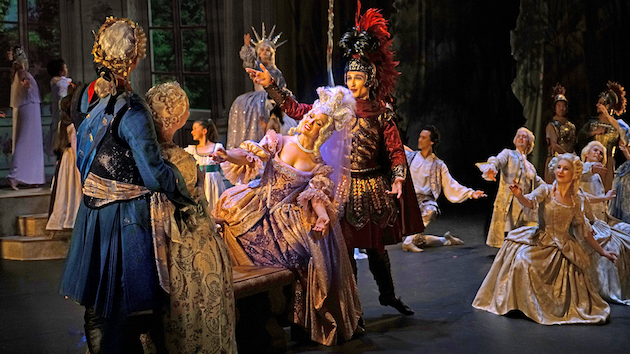 In a deeply affecting final act, the triumphant but modest Trajan not only forgives his political adversaries and war captives, but rechristens the work’s titular place of honor the “Temple of Happiness,” an inclusive paradise for one and all. Louis XV may have squirmed a little over this summons to a higher plane — indeed, Rameau made changes to placate and flatter him — but for an appreciative and engaged audience in 2017, the vision of an enlightened polity was a welcome apparition of the possible in our own uneasy times.

Four years in the making, this three-performance run was a long-sought labor of love for Nicholas McGegan, who led his Philharmonia Baroque Orchestra & Chorale with vigor, nuance, and attention to the grand design. Catherine Turocy doubled as a superlative stage director and choreographer, with her own New York Baroque Dance Company animating one delightful stage picture after another. It was altogether fitting that these able forces convened in Berkeley, for it’s here, at the University of California music library, that an original manuscript of the 1745 score (as opposed to the 1746 revision) is held. This Temple was meant to be. 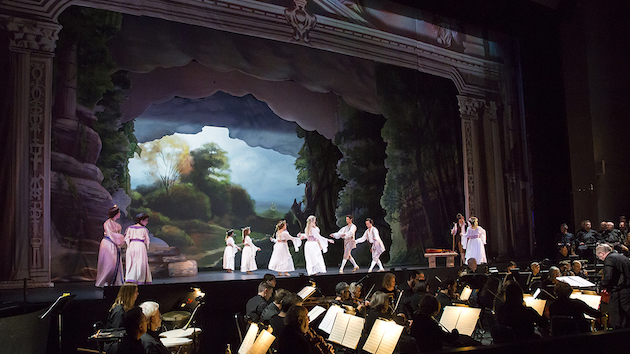 Launched by a showy and rather pompous overture, full of pounding drums, busy horns, and frantic piccolos, the work opens with an instructive Prologue. Decked out in dourly glittering black robes, the evil L’Envie (a sonorous Marc Labonnette) fully embodied evil, complete with a cast of writhing demons and a chorus chiming in on this “frightful night.” Rameau gives it all full weight, with repeated hammer blows of downward figures.

In the first of costume designer Marie Anne Chiment’s many coups, Apollo, decked out in a lofty, golden-feathered headdress, entered on an elevated, rocky ledge. Aaron Sheehan’s voice sounded pure, if a little porous, but an air of goodness settled across the scene, with the far-off temple glowing in the verdant distance on designer Scott Blake’s pictorial backdrop, bathed in Pierre Dupouey’s buttery light. A lovely, patiently stylized dance of the Muses, doubled with video projections, added a beatific sheen.

A premonitory tension arrived in the first act, when Arsine (the urgent and captivating

Gabrielle Philiponet) prayed, “Do not let me love a tyrant.” After a sublime pastoral idyll, full of rustic folk dances and beguiling shepherdesses, the tyrant Bélus (an appealing but vocally pallid Philippe-Nicolas Martin) arrived. Rameau, ever the vivid enactor of the scene, makes the conflict between countryfolk and soldiers urgent and vital. 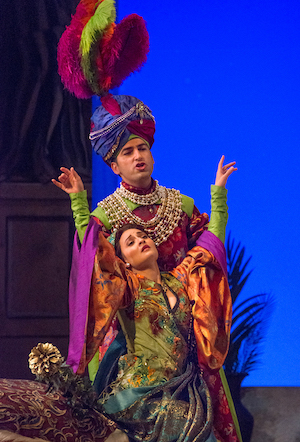 Act 2, after intermission, gave Bacchus (an intonation-challenged Artavazd Sargsyan) his shot at the Temple. The music swaggered and swooned, and Turocy’s vibrant and sometimes bawdy choreography played along at full tilt. Camille Ortiz-Lafont excelled as Érigone, the object of Bacchus’s erratic desire.

The best came last, in Trajan’s transformative victory. Sweeping from the pensive and eloquent meditations of three women to the elegant and stately celebrations at the end, Temple’s third act was a musical and theatrical marvel. Sheehan, tall and willowy in regal blue military garb, was both commanding and tactfully yielding as Trajan. Philiponet, her voice firm and fluting, partnered him ideally as his honored mate, Plautine. Musically, once McGegan and the singers had taken the measure of Zellerbach’s size, Sunday’s final performance grew steadily more assured.

In ways both lavish and subtle, spectacle won the day after all. Two pairs of dancing Trajans and Plautines, costumed and bewigged as ideal versions of their “real” singing counterparts. Their fluid, interwoven movements captured an aspirational essence, a sense of what might be in a perfected world. There was more, perhaps too much, still to come, including a prolonged maypole dance featuring a troupe of demure children from the Berkeley Ballet School.

But when the Temple of Glory finally closed its substantial doors, a listener felt fully enclosed in Rameau and Voltaire’s singular universe. Sight and sense, music and movement, human frailty and the quest for justice were raveled together like those maypole ribbons. Symbolically tied to Plautine by snippets of those same ribbons, Trajan made good on his promise. Happiness poured forth in all directions. 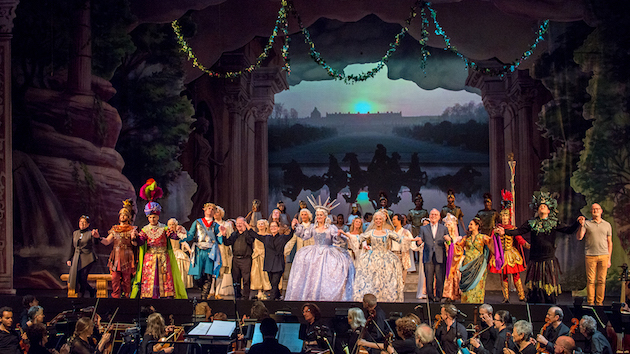