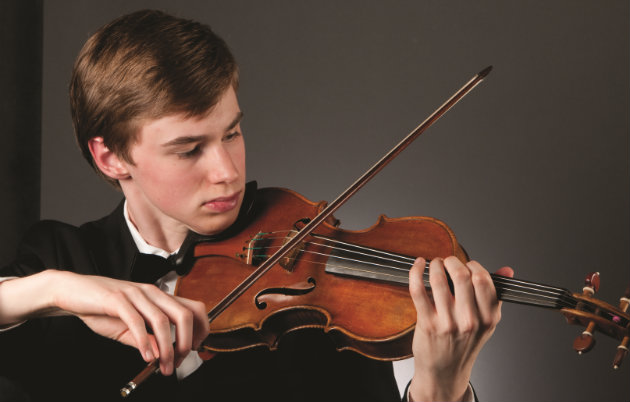 Fitted out with a new, leaner name, the Oakland Symphony – formerly the Oakland East Bay Symphony – opened its 2015-16 season October 2 at the Paramount Theatre with an expansive program that included a West Coast premiere, an entrancing turn by a young violinist, a little choral music, and a lush, long-winded Rachmaninoff staple. Music Director Michael Morgan conducted, ceding the podium for one gracious gesture.

In honor of her 10 years as director of the Oakland Symphony Chorus, Lynne Morrow led her singers and the orchestra in a selection of Brahms’ Liebeslieder Waltzes, Op. 52.  It was a characteristic move by this organization, which both regularly celebrates its own past and looks ahead. Morgan took to the microphone at one point to preview several upcoming concerts. “You won’t want to miss this one,” he said.

What listeners wouldn’t have wanted to miss, above all, in the season opener was violinist Kenneth Renshaw’s gorgeous, finely detailed reading of the solo part in Prokofiev’s Violin Concerto No. 2.  Concertmaster of the San Francisco Youth Symphony from 2008-10, this reedy, boyish artist staked his claim on the concerto right away, voicing the unaccompanied solo theme in shapely, long-lined phrases.

Everything that followed seemed to flow from that, in a burnished performance matched and mirrored by Morgan and the orchestra. In the opening Allegro, carried off with an elegant restraint, Renshaw’s warm tone and careful articulation of the passage work was gracefully handed around and picked up, most notably by the cellos. The delicate pizzicato ending posed a quizzical, open-ended question. If a measure of antic drive went missing from the closing Allegro, Renshaw’s flurry of precise double-stops and decisively plucked chords supplied yet more proof of his name-to-watch credentials.

Renshaw formed the lyrical response, in a positively ravishing account of the slow movement.  Over a deliberate, triple-meter pulse in the orchestra, he began a conversation that bloomed open, grew more complex with some nervous stammering figures, turned pensive and brooding, and landed in a touchingly modest, self-effacing way. Renshaw’s ability to express all this as if it were a single, flowing sentence was a marvel of emotional maturity and assurance in one so young.

If a measure of antic drive went missing from the closing Allegro, Renshaw’s flurry of precise double-stops and decisively plucked chords supplied yet more proof of his name-to-watch credentials.

Local hero Mason Bates, the composer/DJ who came to prominence here with the San Francisco Symphony and now has composer-in-residence stints with the Chicago Symphony Orchestra and the Kennedy Center in Washington, D.C., is a man of multiple musical identities. Known for crossing-breeding orchestral and electronic textures, he speaks in a perpetually lively and distinctive voice.

Devil’s Radio, commissioned by Idaho’s Sun Valley Summer Symphony and heard at the Paramount in its West Coast premiere, is Bates unplugged, with nothing electronic. Not that there was any shortage of color wattage and excitement. A propulsive, surging thing of shiny surfaces, blues and swing riffs, dark explosions from the trombones and tuba, Coplandesque effusions, and plenty of percussive clatter, the concert-opening piece filled its nine-minute running time to the max. More show than musical substance, Radio was a bit like Ravel’s Bolero without the patient build-up, a frenetic, pulse-quickening sprint.  Morgan and the band charged through it with gusto and appetite.

It bookended well with Rachmaninoff’s Symphonic Dances, the composer’s 1945  showcase of his own orchestral palette. In a performance that was stronger in the outer movements than in a wayward and sometimes ragged middle section, Morgan went for the high impact. The sound was big, round and perhaps a bit much, like a heavy meal that goes on a bit too long. The woodwinds supplied the more delicate course, with some excellent work by all concerned. Along with the flutes, David Henderson deserves special mention for his sweetly mordant alto saxophone. High marks, too, for the hard-working percussion section.

The seven short Liebeslieder Waltzes came off as a perfunctory interlude, done in rhythmic lockstep with a redundant sameness of effect. Only in the final selection, the cheerfully misanthropic Nein, es ist nicht auszukommen, did the chorus come through with clear diction. Printed texts and translations would have helped – another deficiency of a poorly annotated program book. As an organization that works so hard on the audience experience, the newly branded Oakland Symphony ought to upgrade the reading matter it distributes.