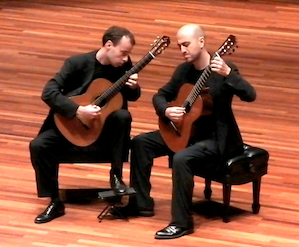 Italian guitarists Matteo Mela and Lorenzo Micheli, the ensemble SoloDuo, have established an international reputation for exquisitely flexible musicianship, both passionate and subtle, as well as effortless virtuosity. They lived up to the billing in Saturday’s concert, presented by the Omni Foundation at Saint Mark’s Lutheran Church, which featured the world premiere of the newly discovered Sonatine by Alexandre Tansman, and a major but unjustly neglected work by Andrés Jolivet.

Tansman (1897-1986), a Polish-born composer with Jewish roots, lived in Paris for most of his professional life, though he spent the years of World War II in Los Angeles, where he composed for films and was nominated for an Academy Award. His Cavatine for solo guitar, written for the great Spanish virtuoso Andres Segovia in 1951, became very popular and the Sonatine was written the following year at Segovia’s request. Tansman seems to have been frustrated by the constraints of the solo guitar and Sonatine gives the impression of being composed for an imaginary guitar with greatly extended capabilities. The work was recently rediscovered in Segovia’s library, presumably over 60 years after he put it aside as unplayable.

The work’s new editors made the decision to publish Sonatine as a guitar duo in order to suitably render its thick textures. It is a substantial, four-movement work, written in a neoclassical style. Both guitar parts offer abundant rewards and challenges and the idea that this work could be performed by a soloist seemed absurd on Saturday evening. SoloDuo is the ideal interpreter of this music, sensitive to every detail and responding with rhythmic fluidity and sublime sense of color to every nuance.

My favorite music on the program, Andre Jolivet’s Sérénade, for two guitars, was another neoclassical work written in Paris in the 1950s. Jolivet’s aim was “to introduce new harmonies and expressions from a contemporary syntax up to now unknown to the guitar.” It was certainly original. At the same time, each movement refers circumspectly to older music: the 16th-century Italian canzona, Spanish flamenco, French Impressionism, while the fourth movement, with it’s asymmetric rhythms and irregular accents seemed to me a cross between the jazz of Gershwin and the Stravinsky of The Rite of Spring.

The last century has seen composers and audiences alike fall under the spell of the guitar. But the guitar’s relative newness on the concert stage means there is little substantial original music before the 20th Century, making transcriptions a necessity. Beethoven’s music, however, has generally been considered unsuited to the instrument. It is a delight to see this barrier fall so spectacularly in SoloDuo’s performance of Beethoven’s “Moonlight” Sonata, Op. 27, No. 2

The intimate, confessional opening movement was spectacularly well-suited to SoloDuo’s meticulous and soulful interpretation. Their projection of mood and choice of tempo for the lyric second movement gave the needed relief after the profound first movement. After the calm, quiet chord at its conclusion, SoloDuo’s ferocious opening of the third movement was a stunning introduction to music full of manic rage.

The remainder of the program consisted of transcriptions of Mozart’s Sonata K. 331, Rossini’s Overture to the Barber of Seville, Debussy’s Clare de lune and Couperin’s Le tic-toc-choc. Every composition, whether grand or intimate, profound or simply entertaining, was exquisitely performed. Some musicians seek to impress with raw speed and technical dexterity: SoloDuo has these qualities in abundance but has chosen music and a performance style which emphasizes a virtuosity much rarer and precious, based on emotional intelligence and flexibility. It was a magical evening.

The Omni Foundation has begun offering Prelude Performances by local high school students. The evening began with an enthusiastically received performance of Pachelbel’s Canon irreverently arranged by the Los Angeles Guitar Quartet and Lotus Eaters by Andrew York. The music was engagingly performed by Alexander Stroud, Ashwin Krishna, Bleiz Larzul, and Shreyas Parthasarathy from the guitar programs at the San Francisco Conservatory of Music Pre-College Division and the Ruth Asawa San Francisco School of the Arts.