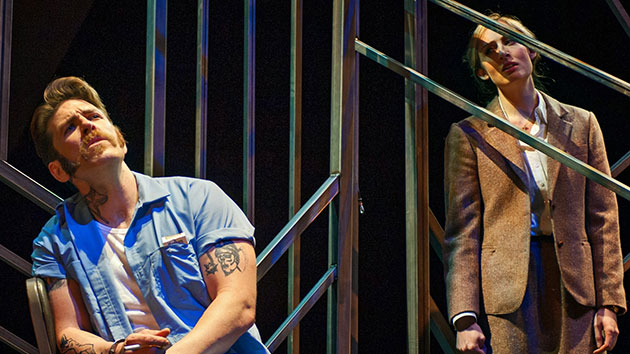 With its anguished Jake Heggie score pared down for a smaller orchestra and its operatic scope undiminished, Dead Man Walking made a powerful return home last weekend, 15 years after its San Francisco Opera premiere. Especially in the more consistently gripping first act, this Opera Parallèle production at the Yerba Buena Center for the Arts retold the story of a nun’s relationship to a death row inmate with the moving depth and emotional honesty this fine work embodies.

Performances of a high order prevailed. Baritone Michael Mayes was transfixing as Joseph de Rocher, the grimly preening and psychologically imploded Louisiana convict who murdered two teenaged lovers and rebuffed Sister Helen Prejean’s counsel and spiritual summons until shortly before his execution. Jennifer Rivera poured forth the nun’s meditations on faith, love, and her own failings with a mezzo soprano voice both keenly focused and full of light and shadow. Mezzo Catherine Cook used her two arias as the killer’s mother to create a heartbreaking, fully formed portrayal of a mother’s grief and wishful denial.

Conductor and company Artistic Director Nicole Paiement and a 30-member orchestra worked wonders in the pit. By turns lyrical, snarling, poignant, thunderously assertive, and puckishly funny, Heggie’s reworked score tracked the characters’ emotional arcs with uncanny fidelity and haunted beauty. The composer called on the woodwinds again and again to make the most piecing and subtle points, and they responded every time. If anything, the reduction in orchestral forces only clarified the music’s range and grace.

Artistic Director Nicole Paiement and a 30-member orchestra worked wonders in the pit. … the reduction in orchestral forces only clarified the music’s range and grace.Tapping into hymns and spirituals, Southern comfort folk tunes, and even a bit of Elvis Presley (“Jailhouse Rock,” for gallows humor), the score rises from its geographically specific roots toward an expansive bloom of terror and wonder. One of Heggie’s great gifts, fully realized by the Opera Parallèle cast, is a facility for writing vocal lines that have both a vernacular ease and lyrical drive. Thanks to first-rate diction throughout, the supertitles were all but superfluous.

Working with material explored first in Sister’s Prejean’s 1993 memoir and then in the 1995 film, the Dead Man opera makes an eloquent case for self-scrutiny, empathy, and forgiveness. “The truth will set you free,” the sister assures Joe in one of the opera’s intimately exalting duets. After witnessing Joe’s emergence from his spiral of rage and isolation and then the lethal injection that ends his life, performed in agonizing silence, the audience registers the work’s anti-death penalty message.

But this is a work of art, not an editorial. Heggie and librettist Terrence McNally take pains to dramatize the reality and consequences of the crime itself. An early scene, amplified by video in director Brian Staufenbiel’s production, depicts the murder of the unclothed and defenseless lovers (Brandon Blum and Amitis Rossoukh in non-singing roles). The two, like silent ghosts, haunt the action to the end – a tactic that is arguably overused.

The opera also gives clear and insistent voice to the four parents of the murdered teens. Baritone Robert Orth made an especially strong impression as a father both tormented and morally challenged by the nun’s principled advocacy for the killer of his child.

Staufenbiel and his design team gave Dead Man Walking a heroic yet delicately wrought dimension. A pair of separate cells, Sister Helen’s and Joe’s, defined the major axis of the story. Stylized prison-bar panels, descended from the flies and manipulated by a chorus of inmates, carved out shifting spaces of confinement and aspiration. Rows of lights, at once harsh and dreamy, were added later on. Those two elements were so effective that the video screen, criss-crossed with heavy bars, occasionally felt redundant and distracting.

Even at 80 minutes, the first act surged by with propulsive momentum and urgency. Whether alone inside Sister Helen’s agitated mind as she makes her first long drive to the ominous Angola prison, or watching her tangle with a cynical chaplain (a growly John Duykers) or the warden (a sturdily granitic Philip Skinner) on the way to Joe’s cell, a cinematic flow carried the audience along. In one gorgeously rendered scene for the two principals, Mayes set his gravelly baritone aloft as he marveled at the pull of women in his life. “I can’t do it alone,” he and Rivera sang as the duet flourished, an aching expression of the need and limitations of human connection.

Perhaps that kind of intensity couldn’t be sustained. The opera’s second act seemed more studied and less fully felt. A duet Rivera sang with another nun (the potent soprano Talise Trevigne) came off as more of a theological discussion about forgiveness than a genuine crisis. Strong as her singing was throughout, Rivera’s acting grew a little static as the night progressed. Three hours is a long time to spend waiting for the inevitable.

But when it came, Dead Man Walking took hold for its final scene. The procession to the execution chamber, along those mobile iron walls, had a grim grandeur. So, in a raw, chastened voice, did Mayes’ apology to the parents of his victims. And then, with the crucifixion imagery plain to see, he was strapped to the gurney. A last hymn, sung unaccompanied by Sister Helen in a small pool of light, was her last tiny, brave act. It was altogether fitting that she sang at an exhausted near-whisper.