Samuel Johnson averred that love could not be “otherwise than blind” without a comparison. In a revelatory series of three concerts, Other Minds’ Charles Amirkhanian provided lovers of maverick American composer Conlon Nancarrow (1912-1997) some Other Geniuses to comparison-shop against. Sponsored by OM and a team of organizations including Cal Performances, the concerts at UC Berkeley’s Hertz Hall were a scene of fascination for the 200-300 attendees at the performances, two Saturday and one Sunday. The results showed how marvelously and obsessively Nancarrow, from the confines of his Mexico City studio, narrowed the focus of his art to tempo and canon. Meanwhile, the Others, Rachmaninov, Thomas Adès, Bartók, and Stravinsky, in their masteries of a greater range of musical elements, orbited the planet.

The Saturday afternoon concert, like a great deal of the interest in Nancarrow, was device-centric. Two methods of realizing piano rolls were featured. In the first half, piston-driven devices resting above the piano keys and triggered by a computer did the work, from rolls scanned into a computer by the Seattle-based sound sculptor, composer, and inventor Trimpin. In the second half, hammers from a machine rolled up to the keyboard played from the old piano rolls (see photo). The console, which used to be called a piano player and is now referred to by some as a pianola, was controlled in real time by a British master operator, Rex Lawson. It had levers and pedals on it which could control tempo and dynamics, and thus make its operators able to more closely simulate, with their presence and manipulation, what humans playing the notes might be able to accomplish — if they had flawless accuracy and dozens of fingers. 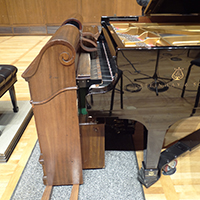 Trimpin ran Nancarrow’s Studies Nos. 11, 5, 6, 26, 37, and 41c. Each Study works out concepts of repeating melodies or gestures in various layers; each layer subject to different time constraints. All except No. 37, which was 10 minutes long, were short — a saving grace with Nancarrow: Why beat an idea to death? No. 5, for example, had several series of gestures at seemingly irregular intervals, but the series were on different staves in effect, some of them accelerating to “catch up” with the others. The progression was fascinating as the sound gradually became a frenzied blur of notes, because in addition to recognizable flourishes, a tune similar to “I got rhythm” peeked out from time to time.

No. 6 is one of Nancarrow’s best and most famous numbers. A fast passacaglia or ostinato with a tango-like rhythm plays in the bass (too loud in this realization), but in an off-kilter tempo. Meanwhile, a delightfully wandering melody recirculates in the upper notes. No. 37 is a pleasant extravaganza of sounds, but its concept of 12 12-voiced canons, while fodder for the specialist, is beyond ear-understanding. No. 41c, for two pianos, is really one piano playing 41a and another 41b at the same time.

A Shot of Canon X

Lawson played only one piece by Nancarrow, his incredible Study No. 21, the “Canon X.” Two lines of hardly repeating, atonal notes run a parallel to each other, but one starts fast and ends up slow, the other the reverse. It’s mesmerizing and unique — how could anyone write another without being accused of plagiarism? Lawson was able to improve the result by increasing the dynamics toward the end. Such might have been possible with a computer version, but it would have sounded less organic without the visual of a person pumping away on an instrument. 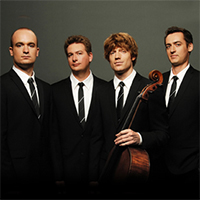 Then Lawson played compositions by Percy Grainger (Sheppherd’s Hey and Molly on the Shore), Sergei Rachmaninov (Prelude in E-flat, Op. 23, No. 6), and music for a lost silent film by Jean Grémillon (1901-1951). The latter composers’ pieces demanded shadings that could not have been accomplished by a turn-it-on, walk-away-from-it player piano. Lawson, for all the interpretive work on his pianola made it clear why someone actually played the Grieg concerto with it and an orchestra in the early 20th century without sounding mechanical. But Lawson, by the same token, made Nancarrow’s music sound more mechanical.

The hugely impressive Calder String Quartet handled the second concert Saturday night. In the first half, a brilliant programming concept interleaved the four movements of Adès’ The Four Quarters (2010) with two quartets of Nancarrow (Nos. 1 and 3) and an arrangement by Paul Usher of his Study No. 33. The result verified that Nancarrow’s music provided intriguing challenges for the Calder, but Adès’ music made me realize how much I had been missing verticality in Nancarrow when sublime chords appeared near the end of Adès’ “Movement IV: The Twenty-Fifth Hour.” The Four Quarters is yet another masterpiece of one of the 21st century’s greatest composers. Nancarrow, however, wasn’t totally eclipsed: I found the second movement of his Third Quartet (1987) to be unusually sweet, ethereal and magical. 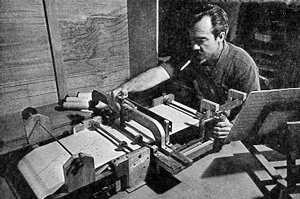 The final half of the second concert was devoted to an excellent performance of Bartók’s String Quartet No. 5. The Calder boasted the best, smooth-as-silk tone I’ve ever heard in this piece, usually so scrapy with bow-horsehairs flying. A bit more force on the accents of the finale might have been called for, but on the whole, this is an ensemble that should be sought out whenever they grace the Bay Area in the future.

The concluding concert Sunday night featured mostly live performers. Percussionist Chris Froh, took on Dominic Murcott’s arrangement of Nancarrow’s short Piece for Tape to great and deserved acclaim. One man sounded like a line of a hundred machine guns raking World War I trenches. Then violinist Graeme Jennings impressed so many in Nancarrow’s two-minute Toccata for violin and Lawson’s pianola, that the audience demanded an encore of it, and after that even a third rendition. Unfortunately, Jennings had to catch a plane to Australia — most would have been happy enough for him to toccata along all night — but he had to apologetically bow out.

Lawson then returned to play the complete Rite of Spring on two rolls, the manufacture of which was supervised by Stravinsky himself under contract. The result was most impressive in the Dance of the Earth concluding Part 1; in other sections, parts were obscured and range of dynamics could not match the orchestral version, but the fluidity was superbly handled by Lawson such that the music sounded as if it were played directly by a two-piano team. The second half of the concert featured duo-pianists Helena Bugallo and Amy Williams playing arrangements of Nancarrow Studies Nos. 3b, 4, 18, 9, 44, 20, and 15, along with Nine Early Pieces and a 1941 Sonatina. The human touch was most effective in the Study No. 18, creating a light, blurry, and misty atmosphere that don’t think player pianos could generate. The Sonatina was an especially attractive work — I expect this excellent piano team to help disseminate Nancarrow’s best music to a wider audience.

I should not finish without mentioning the tremendously thorough documentation and ancillary activities organized by the Other Minds team to go with these concerts, which included films, panel discussions, and demonstrations. A laudatory cornucopia — or should it be a piñata? — for Nancarrow’s 100th birthday celebration.