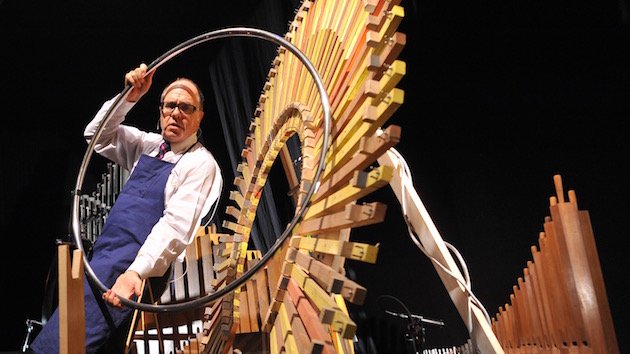 What’s inside a Schick Machine? There are diagrams and equations, drawn on butcher paper; huge metal sculptures, balls, and hoops, and bells. A deconstructed pipe organ in the shape of a sunburst — called the Peacock — dominates the space. Somehow, Laszlo Klangfarben dreams, these mechanisms will work together in harmony, reconciling past and future, large and small.

It’s a bizarre premise — but one that forms the heart of an unclassifiable and unforgettable show: Schick Machine, starring percussionist Steven Schick and a menagerie of invented instruments and sound sculptures. Schick plays the obsessive inventor Klangfarben in this production by the Paul Dresher Ensemble, performed, on September 23, at Z Space.

With the house lights up, it takes the audience a few minutes to realize that the show has begun. Already in character, Schick ambles onstage wearing an apron over a crisp white shirt, and consults the blueprints he’s left draped over a large metal contraption. Over the next hour, he wanders around his studio, testing various noisemakers with curiosity, and often, unbridled joy. 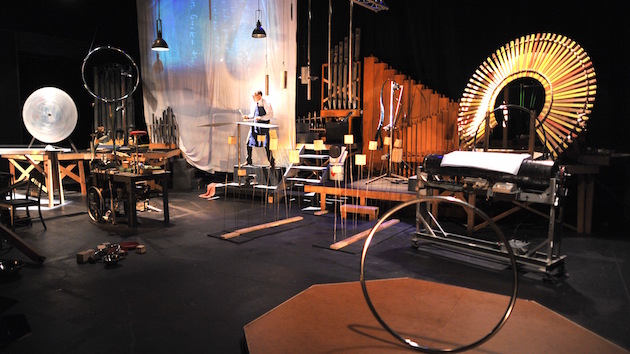 Some of these invented instruments (Paul Dresher, Daniel Schmidt and Matt Heckert) fill conventional percussive roles — a metal mobile sounds like chimes, a large disc like a tam-tam. Some slyly nod to convention: Schick bows a snaky piece of metal, imitating a violinist’s stance. Other instruments are more peculiar. In one episode, Schick rubs mallets on a sheet of metal, producing low, oscillating drones. He accompanies these pitches with high whistling, when another whistling sound joins in — it’s the kettle, on the nearby kitchen island. He makes tea.

Only later, at the post-show instrument petting zoo — which the majority of Friday’s audience stayed to attend — can the spectators see the inner workings of these unfamiliar noisemakers. Until then, it’s like magic. Across the stage from Schick, mechanical instruments begin to bob and thrash, seemingly of their own accord. 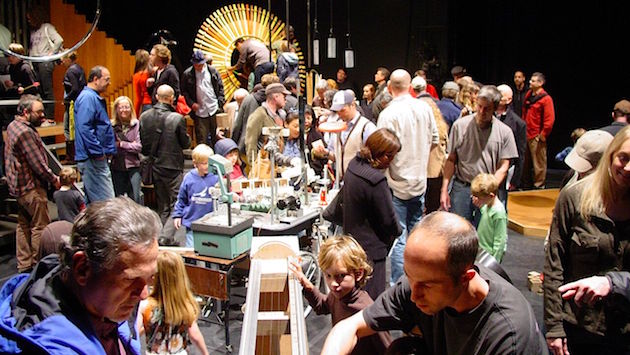 In several episodes, composer Dresher sequentially layers these individual sounds into hugely complex textures. Looping over a driving 2+2+3 rhythm, a pentatonic sequence — played on a motorized 7-string hurdy-gurdy (called the Hurdy Grande) — joins with industrial power chords and table drumming to create a minimalist, trance-like groove. This music wouldn’t be out of place at a club, and Tom Ontiveros’s projections — flashing animations of notes from Klangfarben’s plans — finally feel necessary in this context. 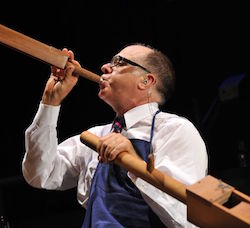 As these climaxes recede, the audience is privy to musings — spoken by both Schick and a disembodied narrator — of Klangfarben, whose biographical details are sparingly but evocatively filled out. Klangfarben (German for timbres), it turns out, is an assumed last name: he worked so hard that he forgot his real one. As for Laszlo? “It just sounded good,” he quips. He’s always been enamored of machines, and his obsession with his work cost him his marriage.

That Klangfarben’s character is so completely formed out of such a slim script has much to do with the work of writer/director Rinde Eckert, whose performance in Jonathan Berger’s My Lai monodrama was a highlight of 2015.

It’s also a testament to Schick’s theatrical prowess. Bay Area audiences know to expect masterful musical performances from him — and indeed, his scat-beatboxing and hand-drumming, alone, make Schick Machine worth seeing. But they may be pleasantly surprised to learn that he is also a skilled actor. As Klangfarben, Schick moves his body as expressively as a silent film star — from his angular holding of his legs, to the tension he directs toward his shoulders, to the way he compacts his body when making a diminuendo.

It’s impossible for the audience not to root for this earnest, self-conscious hero of Schick’s creation. Toward the end of the show, Klangfarben reasons that even though the Schick Machine isn’t yet complete, “it’s theoretically sound — theoretically, it’s sound.” In this play on words, both statements are true: the audience may not understand how, exactly, the Schick Machine will reconcile the past and future, the large and small, but Klangfarben, with his enticing palette of sounds, has us utterly convinced.