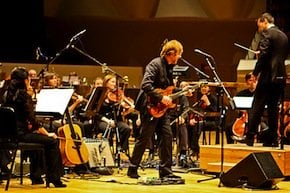 Wrapping up his first-ever orchestral tour through four cities, guitarist Trey Anastasio performed new arrangements of Phish songs and his own solo material to a sold-out crowd at the Walt Disney Concert Hall in Los Angeles on Saturday. This appearance with the L.A. Philharmonic — the previous were with orchestras in Atlanta, Pittsburgh, and Denver, featuring much of the same set list and also conducted by Scott Dunn — was one huge service: a magical, sometimes childlike, service in musical spaces.

Going in and walking out, I wondered the same thing: How to explain a classical concert featuring a front man who can make an electric guitar do whatever he wants, who inspires throngs of devotees, in numbers approaching Dead Heads, to sell their homes and buy into a life on tour with a band (the top- grossing group last year)? How to tie a bow around this meeting of suits-and-ties with the tie-dyed? And does a concert format like this do service to an audience itching to light one up and Bounce Around the Room when, instead, they’re seated in a formal concert hall?

The only way to capture all that is to explain the way the music came across in this space. The Phish lyric that sums it up is the vaguely profound “I’ve got a blank space where my mind should be.” And not because of the unmistakable smell wafting through the air of the architectural and acoustic masterpiece that is this Frank Gehry building. Nor was this “spaced out” due to what the intermission bartender said were some of the highest sales she’d seen. It was that Anastasio served to remind us how important space is in art — the space between notes, the spatial relationships in music, the space wherein it’s played. Stop thinking; hear the space.

Trey Anastasio once said that he thinks a musician’s job has always been to provide an act of service for his audience.

The songs experience another life with the backing of an orchestra, demonstrating another side of Anastasio’s creative genius. Behind that signature everlasting grin, which fully came out after the third standing ovation (par for the course here: all but four of the 11 songs received standing Os), was the unmistakable feeling that this is where he is in his element — a blank space where you really hear the music come into its own, instead of a kaleidoscope of harmonies and infectious refrains that elsewhere mindlessly animate you into a bobblehead. That’s not to say that most people in the audience could refrain from head bobbing and chair dancing when not actually vocalizing their happiness. The audience got their participation fix, clapping on cue in Stash, hands down one of the best songs of the night, right before intermission. 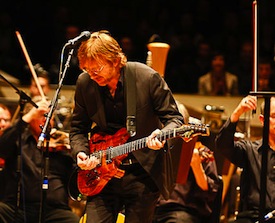 Trey Anastasio once said that he thinks a musician’s job has always been to provide an act of service for his audience, and that’s what he did just as he took the stage. The ginger-bearded jester stood next to the first violin and conductor and bound socially divergent people together, closing up spaces between season ticket holders and those hooked in a permanent Phishing season.

From the first song, First Tube, he turned the tempo down, nodded to jazz rhythms, seemed to say back ... it ... up. Climbing note by note, essentially a remastering of a piano scale on the electric guitar, the crudeness of the guitar strings, the pulling close on the fretboard, somehow highlighted the bigger world of the orchestral strings behind him. Most of the pieces stripped everything back, reeled down, and then shuttled us into a higher place where you want to stay forever.

After the concert and back at the hotel, I had a chance encounter (what are the odds?) with Anastasio himself, something that can inspire fainting or pure idiocy on the part of awestruck fans — massive stuttering, in my case — and he said he was blown away by the sound in the Hall. “You can hear everything,” he said. “I heard tiny amazing details from those violins and my strings that I’ve never heard before.” And from the stage he'd mentioned what an honor it was to perform in this venue, "this is the greatest sounding room I've ever played in," he told the audience.

Most songs were full-bodied fascinations.

Maybe that’s why during some tunes — the too-childlike Brian and Robert and the simple Let Me Lie — it seemed that Anastasio was being almost timid or respectful of the sound, like a parent not wanting to wake a resting child. But wait, that’s an electric guitar in your hands: Why does Goodbye Head suddenly sound like a kids’ song — point out body parts, say your goodbyes ... “hands, elbows, knees, and toes,” anyone?

Yet most songs were full-bodied fascinations. You think you love a song, and then it beguiles you with an orchestra, its intricacies showed off in a spectacular way. It was all one amazing space for an intimate carnival.

Catherine Getches is Managing Editor of San Francisco Classical Voice. Her writing has appeared in The Washington Post, The International Herald Tribune, The Los Angeles Times, Salon, Chicago Tribune, and The Wall Street Journal, and others. She received her Masters in Journalism from Columbia University and Bachelors from Kenyon College.