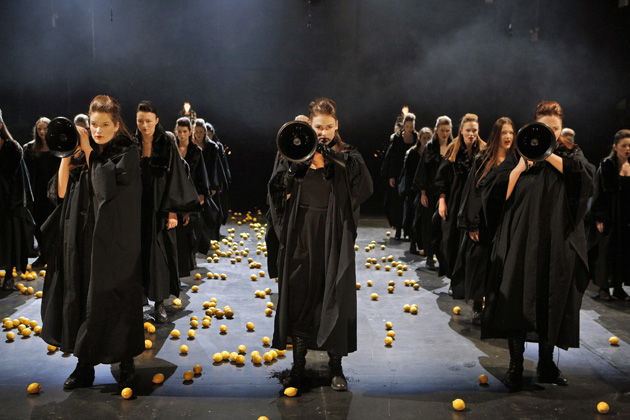 It takes a special sort to be able to love New York City in January. The city’s teeth are at its sharpest, suddenly stripped of December’s gingerbread and tinsel. The wind through the skyscraper canyons pierces through even the thickest of coats and hats. Perhaps not too coincidentally, there historically haven’t been many reasons to venture into the long nights of slush and salt.

This year, however, sees the Prototype Festival present seven dark, surreal opera and music-theater productions in various stages of development — two world premieres, one North American premiere, two works in progress, a cabaret night, and a staged concept album featuring rock icon Courtney Love. It may just be the reason music lovers need to pull on their warmest scarves and go outside.

Luckily, the cast members were stellar singers and competent actors. Countertenor Eric Brenner (Doodle) even controlled the puppet representing his character while singing tricky passages. Mezzo-soprano Hai-Ting Chinn (Brother) was pleasingly mischievous, petulant, and joyful, showing the unfiltered emotions of childhood in both acting and singing. Abigail Fischer as the measuredly optimistic Mother, Keith Phares as a complex and stoic Father, and Nicole Mitchell as a superstitious Auntie rounded out the cast as the adults in the boys’ lives.

Weisman and librettist David Cote stated their intent to make an opera that teenagers could relate to as well as adults, so some scenes were added to the story and characters were expanded. In some cases, such as a scene where Brother and Doodle present a vaudeville-style variety show to the adults, that worked. Later, it started to veer toward after-school-special bathos. Hurst’s story is a compact punch to the gut, but the final blow in this Scarlet Ibis landed too softly and anticlimactically, padded with too much filler and repetition.

Unlike The Scarlet Ibis, Toxic Psalms is not an opera. Eight loose “tableaus” with opaquely poetic titles (Individuum-Collectivum; Big Other) were listed in the program, but the flow of the music and the staging revealed no seams between one and the next. To promote the show, the festival uses a photograph of a single young woman, screaming into an — is it a microphone? is it a light? That image may be deceptive to some. In Toxic Psalms, the focus was very rarely on the individual. Director Karmina Silec offers the production as an “ultimate collective experience,” and the 31 voices on stage were all joined in song, speech, shout, or sigh for much of the time. The group is made up of young women ranging in age from 13 to 23, and they present music from medieval times to present day in a “theater of voices,” weaving movement, visual art, light, and spoken word into their offerings.

The very presence of Toxic Psalms, is unsettling to common perceptions of women’s voices. Girl’s school choirs, “the mystery of Bulgarian voices,” hymns and bathetic love songs in English, sometimes some close harmony to jazz things up — all of that fell apart. Carmina Slovenica are in your face, created by women, driven by women, not afraid to show their teeth or shout down injustice.

The program notes were long, a veritable novel from director Karmina Silec explaining her thoughts on vocal theater and some of the messages embedded in the show. I didn’t have time to read it before the house lights of St. Ann’s Warehouse dimmed to complete darkness. Carmina Slovenica are in your face, created by women, driven by women, not afraid to show their teeth or shout down injustice.

Even stripped of explanation, however, the pure talent and virtuosity present in Carmina Slovenica is astounding. The singers performed merciless contemporary polyrhythms with no conductor and no accompaniment, and their dark, Gregorian chant-esque melodies blended well enough to make Anonymous 4 blush. Without noticeable pause between pieces or enough light to see the program, the languages, time periods, and cultures blurred into visceral emotion and reaction: the leaping joy of Tellu Virkkala’s “Tuulet,” the jagged terror of Veljo Tormic’s “Curse Upon Iron,” the strange keening of Sarah Hopkins’s “Past Life Melodies.”

Visually, Toxic Psalms, was a shower of deliberately unsettling images: 31 veiled women wearing floor-length, black tulle gowns. A lemon, peeled and crushed and mutilated onstage in a public show of citrus carnage. The singers, backs to the audience, holding up mirrors to their own faces and sending sharp, blinding flashes of light into the audience’s eyes. One young woman, ankle deep in mist, candidly and frankly deconstructing the definition of virginity. Air flows through the accordion strapped to her chest, sounding like a human breath. The end of “Curse upon Iron,” a politically potent indictment of industry and war machines, twisted and screamed into a police siren which blared out of megaphones in the singers’ hands, directly at the crowd of well to do New Yorkers.

Female composers are chronically underrepresented in opera especially, and the Prototype Festival (directed by three women) is striving to change that. Four of the 2015 productions were either composed, directed, or both by women. Prototype director Beth Morrison proudly announced that Ellen Reid’s lushly spooky Winter’s Child will premiere at the festival in 2017; the opera is being performed in concert as a work in progress this year, with the support of an Opera America grant for female composers.

Prototype offers new works space to experiment and explore. It offers new kinds of roles for female singers in opera, separate from the common tropes of plucky ingenue, damsel in distress, seductress, and all the other archetypes audiences have learned to expect. In short, opera buffs might want to invest in some chapstick and insulated gloves, because January is a must-see month in New York for electrifying new productions.