The fate of grand opera in Sacramento seemed to hang in the balance during the Sacramento Opera's production of Verdi's Il trovatore Friday evening.

Much seemed at stake in the production, which was given at Sacramento's Community Center Theatre. For one Il trovatore is the only fully staged opera the company is performing in its 2013-2014 season. The importance of the production was also underscored by the fact that this was the first production offered after the company's merged with the Sacramento Philharmonic last July. 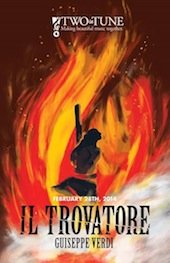 That merger was spurred by financial difficulties that have plagued both organizations since 2008. Last month, the merged organization — dubbed the Sacramento Region Performing Arts Alliance (SRPAA), was to make an appeal to the city of Sacramento for a $350,000 forgivable loan that would allow doors to stay open. Luckily, a surprise 11th hour $500,000 gift allowed the company to stay open, and it subsequently withdrew the appeal.

Add that to the recent development that general director Rob Tannenbaum was resigning after only eight months at the helm of the SRPAA, and you have more uncertainty and drama than you can pack into the libretto of Il trovatore.

The good news is that the company has taken a vital step in the right direction with this Il trovatore. The production may not be noteworthy enough to save grand opera in Sacramento, but it was a definite break with the mediocrity of the company's recent past.

Tannenbuam, who directed the opera, is a recent transplant from Europe, having worked at the Esterhazy Foundation before coming to Sacramento. He considers himself as much an artistic director as general director, in the operatic realm.

He assembled a strong cast of singers here, most notably young soprano Tiffany Abban who commanded the role of Leonora. Abban's radiant voice filled the ultra-cavernous environs of Community Center theater — a venue whose less-than-stellar acoustics has vexed many an accomplished singer. Abban had no problems selling the role, and she shined with a fiery emotional grit in her Act 4 arias and cabaletta.

Every bit as thrilling was the pliant and super clear tenor of Arnold Rawls as Manrico. Rawls got off to a shaky start but his singing grew stronger after the second act. A booming and dusky bass defined the singing of Marcus Jupither in the Count di Lune role. His outsized voice was wobbly at times, and not always on the mark.

Mezzo-soprano Tichina Vaughn also proved noteworthy in the Azucena role. She did not command the stage as much as draw attention to the finery of her singing and sophistication with which she performed a gypsy with a deadly agenda.

The cast was led smartly by conductor Michael Morgan. He accomplished something rarely seen in Sacramento Opera performances prior to his taking over conducting duties — he conducted with an ear towards selling the subtle moment. He let the orchestra weave and intertwine itself with the singers. There were no moments where the orchestra drowned out the singing. Although his tempos were slow in the first two acts, they pace quickened thereafter, adding urgency to the dramatic line of Il Trovatore.

The cast was led smartly by conductor Michael Morgan ... he conducted with an ear towards selling the subtle moment. He let the orchestra weave and intertwine itself with the singers.

This production also revealed Tannenbaum's willingness to take chances in set design — namely with the use of fire, the rear projections by Paul DiPierro, and Neil Peter Jampolis’ lighting design.

The set design proved both refreshing — and also threatened to undo the production's charm. As for the former, it was a bracing experience to enter the theater to encounter a raised curtain offering stage with six chairs and a burning flame emanating from under center stage. For this company, offering that is a big change, and a testament Tannenbaum sense of theatricality.

In turn, the rear of the stage offered a series of high definition projected images suggesting the changing environments relative to Salvadore Cammarano's libretto. The burning flame proved a provocative thematic image for this opera. Unfortunately, the flame was left on throughout in the first three acts of this production. Its constant presence center stage imperiled its singers, and went a long way towards searing itself into the retina of those in the hall. The sparing use of the flame would have been winsome. Used continuously, it violates the dictum that you should never let a prop outshine your performers — especially for over an hour.

Il trovatore is an opera that can always use dynamism on stage. And given the minimalist set design you would have thought that a dynamic paradigm would bleed into stage movement. This was not the case on Friday. This production was defined by plenty of "park and bark" around an open flame.

However, despite the shortcomings, this was a good start at an uncertain time for this opera company. Tannenbaum, after tendering his resignation, recently, said he believes that grand opera is not sustainable in a city like Sacramento. The city does not have a robust history of philanthropy compared to other cities of comparable size. Tannenbaum said he believes chamber operas and run-outs to unconventional venues may be the only sustainable form of opera the city can bear.

But on Friday, artistically, he made the case for the opposite. It wasn't always a spotless argument for the charms of grand opera. But the fact there is still any argument at all in Sacramento is a good thing.