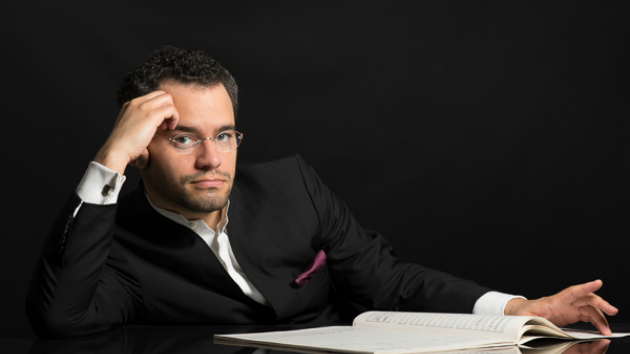 Last year the city of Sacramento and its classical music community had to endure the fact that it was the only city of its size in the U.S. without an active, professional symphony orchestra. That ended Saturday night when the Sacramento Philharmonic returned in dramatic fashion with Mahler's Second Symphony, "Resurrection."

While the performance was far from a spotless affair, programming Mahler’s symphony of conflict and complexity showed a welcome tolerance for risk-taking from the orchestra's management and musicians. The concert, presented to a sold-out crowd at Sacramento's 2,400 seat Community Center Theater, augurs a new era for the 18-year-old orchestra. Gone is former music director Michael Morgan —  who was made music director emeritus. In his stead, a round of six young, up-and-coming conductors will perform its seven-concert season.

On Saturday, the baton passed to 38-year-old Andrew Grams, a Baltimore native who is presently the music director of the Elgin Symphony Orchestra and frequent guest conductor for a long list of regional and major orchestras. After starting with a colorful performance of Ralph Vaughan Williams' Concerto Grosso, the philharmonic moved on to the Mahler, with Grams asking the musicians to perform with as much nuance and power as has been asked of it in a very long time.

Good thing, as Mahler's Second Symphony is a game of contrasts and offers subtlety as well as calamity. The orchestra did not always navigate this gamut with clarity or purpose. Gone was Morgan's facility at shaping a workable balance with the orchestra — balance being not easily found in the tricky sonic confines of the Community Center Theater.

Also absent Saturday was a seamless through-line from one musical idea to another. That was one of Morgan's strengths with the orchestra. In the first movement, Grams and orchestra sold the gloom and doom and the declarative moments. Clarity was lost when the piece called for softer dynamics. Nonetheless, the epic nature of the music was communicated. The orchestra shone in the second movement. Here the string section played with clarity and purpose, and, more importantly, a sense of color.

The orchestra shone in the second movement. Here the string section played with clarity and purpose, and, more importantly, a sense of color. This is an orchestra whose sound is defined by its string section  and that became clear with they way they handled the lyrical parts of the second movement, where violins and cellos sounded warm and pliable. Grams revealed facility and understanding when he conducted the strings — which is no mystery given his start as a violinist.

The third and fourth movements were less cohesive, and the energy sagged in the middle of each. It was in these movements that the orchestra underwhelmed. In some parts the horns sounded tentative and overmatched by Mahler's music.

Grams mustered inspired playing from the orchestra in the fifth movement. Soprano Christine Brandes and mezzo-soprano Kelly O'Connor distinguished themselves with radiant, if not outsized voices. Grams deftly interwove the singing of the Sacramento Philharmonic and Opera Chorus into the musical fabric of the fifth movement.

It’s no stretch to say the Sacramento Philharmonic deserves better than remaining a hostage to the muddy acoustics of  the Community Center Theater. It's best suited for amplified, touring Broadway shows, rather than classical performances

If the hall is no friend to the symphonic musician, it is even worse for the patron. The hall boasts a glaring shortage of bathrooms for women. Worse yet is the surly gang of ushers. Almost all are more interested in scolding patrons rather than making them feel at home in the charmless hall.

These are not insignificant obstacles for the orchestra. Despite the musical and venue shortcomings, however,  the performance came across as a bold statement in a city badly in need of such statements from its struggling arts community.