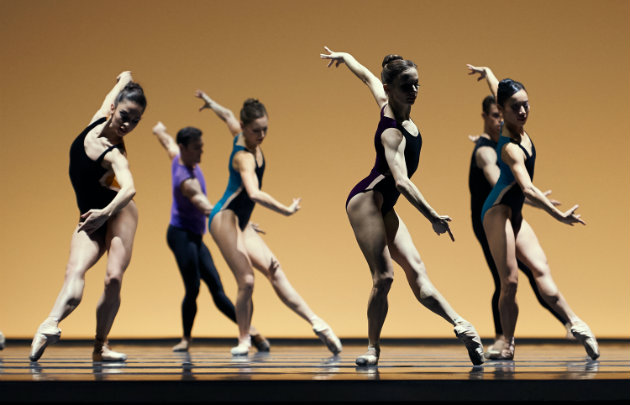 The expat American dancemaker William Forsythe’s 1999 ballet Pas/Parts, extensively re-choreographed for – and partly by -- the San Francisco Ballet’s dancers, had its North American premiere Sunday afternoon, Jan. 24, the first program of eight in the company’s 2016 repertory season. It was a rare matinee premiere, and it was pretty cool to see the company counterprogramming against two playoff games. In Sunday’s runup to the coming, local, Super Bowl whoopdeedo, the home team, playing at the War Memorial Opera House, won.

Not that Pas/Parts, sharing the bill with Helgi Tomasson’s 7 for Eight and Yuri Possokhov’s Magrittomania, is pas perfect. In fact, this Forsythe fan was underwhelmed, having spent too many minutes with fingers in ears. Thom Willems, Forsythe’s go-to composer (25 collaborations since 1984), went loud and irksome this outing.

The noise of his electronic score undercut the genius of the Forsythe brand. Forsythe, who’s worked in Germany for most of his career, is fascinatingly emphatic about torquing his dancers’ bodies — shoulders and heads in opposition to legs and feet — about setting up surprises and overturning expectations, egged on by Willems’ insistent rhythms and fractured pulses. Despite the problematic score, it was impossible to look away from the cast, disporting itself in an austere, two-walled room, harshly lit, the better to pick out the sculptured beauty of their bodies.

Despite the problematic score, it was impossible to look away from the cast, disporting itself in an austere, two-walled room, harshly lit, the better to pick out the sculptured beauty of their bodies. The dancers, in predominantly black practice garb with touches of bright color, moved in trios, duets, and solos, their numbers mixing and recombining, never appearing all together until the finale. (Forsythe designed the scenery and lighting, Stephen Galloway the costumes.)

Forsythe’s virtuosity as a dancemaker speaks to his depth of knowledge and his obvious love of ballet and dancers. That affection is in no way diminished by a mercurial, knowing, often satirical edge. He moves from classicism to commentary, as when ballerinas on pointe suddenly turn into a posturing row of beauty queens. Or a danseur lending support in a tender pas de deux pokes his partner in the ribs, so swiftly that if it were not repeated we’d think it hadn’t happened. Ballerinas are extolled one moment, stretched and manipulated like chewing gum the next. Dancers break from repetitive patterns that look like another day at the office into blithe, swingy kicks, hips in contrapposto to shoulders; frisky leaps, space-gobbling turns.

Thanks to the cast’s impeccable technique and dynamic range, Pas/Parts transcended its troublesome score. Standouts in a uniformly excellent cast included Sofiane Sylve, who shimmers under the light like a living marble statue; Yuan Yuan Tan and Wei Wang, Carlo Di Lanno, Frances Chung, Joseph Walsh, James Sofranko and Francisco Mungamba. Forsythe, who re-choreographed about 75 percent of the 1999 version with input from the San Francisco Ballet’s dancers, took a bow at the final curtain. 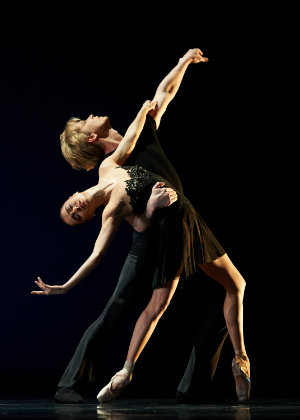 In their duet, Gennadi Nedvigin knelt at Vanessa Zahorian’s feet before sliding her across the floor in a wide second position and supporting her in a deep and gorgeous arabesque. In the fourth movement, he returned, vaulting high and handsome alongside Lonnie Weeks, a fine corps dancer; Koto Ishihara; and Zahorian.

Magrittomania, which Yuri Possokhov made in 2000, when he was still a principal dancer (he became resident choreographer in 2006), looks better every time it’s on. A work of keen imagination by a fluent artist (and about one, to boot), it starred Davit Karapetyan as the Belgian surrealist, wandering confused and impassioned through his mind’s eye (and sometimes we see his mind’s eye). 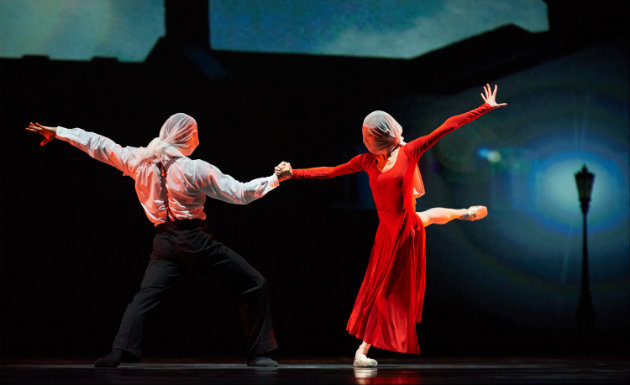 Thyra Hartshorn’s sets and costume design are sheer genius; Magrittomaniacs or those about to become such will identify every one of the motifs, from the clouds in the sky to the streetlamp, from the men who rain down on the front curtain, to the bowler hats, to the cutout of the master himself. And speaking of cutouts, there are the corps women’s dresses, with exposed (prosthetic) bosoms. Martin West conducted the score, composed by Yuri Krasavin after Ludwig van Beethoven.

Max Cauthorn, Esteban Hernandez, and Wei Wang do an impeccable job as Magritte’s wingmen. His beloved is danced by Yuan Yuan Tan, stunning in a red gown and hauntingly beautiful every time she moves, or just stands there, as she does at the ballet’s end, holding a huge green apple – but you have to see it for yourself, and please make sure you do.