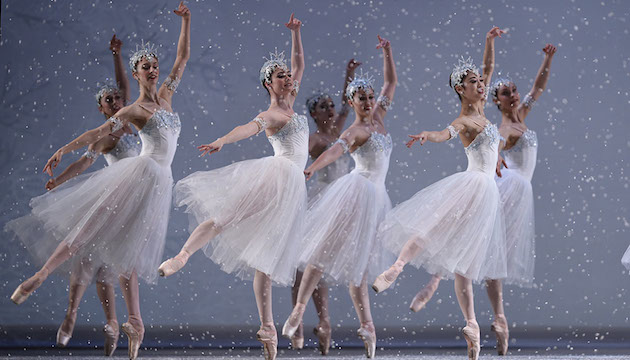 I’ve had the pleasure of seeing Mathilde Froustey dance several times since she joined San Francisco Ballet from the Paris Opera Ballet last season, including, memorably, during SFB’s visit to Paris last summer, where her return was warmly welcomed by the audience at the Theatre du Chatelet. In Friday’s opening of Artistic Director Helgi Tomasson’s perennial holiday classic, The Nutcracker, amid radiant work by the entire company, Froustey, as the archetypal ballet queen — the Sugarplum Fairy — sparkled as brightly as her own tiara.

In a performance rich in joie de vivre, she combined pliancy and strength, bringing a calm, generous, and glowing authority to her every move. Her upper torso never strained; her footwork blended precision and a genteel passion. Froustey’s not particularly big, but she dominates the stage whenever she’s on. She was a sujet, or soloist, in Paris, but here she’s a principal dancer, and her prospects look terrific. 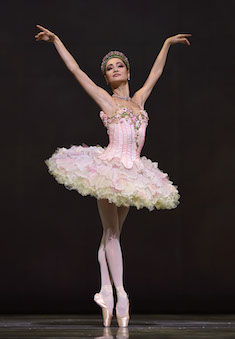 All the principals were, in fact, notable. Vanessa Zahorian and Taras Domitro as the King and Queen of Snow lit up the stage, even though Domitro momentarily lost his footing (they say those flakes are skid-proof, but you’ve got to wonder). The Snowflakes danced up a storm and the stagehands threw down to match, covering the stage with the white stuff. Yuan Yuan Tan and Luke Ingham gave a wonderful account of the Grand Pas de Deux, beautifully capturing that special fairytale regalness. Tan continues to epitomize delicacy and strength. Ingham’s solo included perfect grands pirouettes and high-flown tours jetes; he’s always looked like a great partner for Tan, and now he looks like a total prince of the company. He still could do with more connections between his steps.

Ricardo Bustamante was a charmingly droll Drosselmeyer, the perfect magical uncle to Audrey Armacost’s Clara. Esteban Hernandez was wonderfully spaghetti-ish as the clown in the box, and Francisco Mungamba invested the Chinese divertissement with astonishing leaps.

The throngs of adorable children in party clothes scarfing down cookies at intermission seemed thrilled to be there, and thus exhibited great good taste. It was a fine show, thanks to the enthusiasm and artistry of the cast, which of course includes plenty of kids from the San Francisco Ballet School, and joyful Tchaikovsky from the orchestra, conducted by Martin West.

One of the stars of the show each year is its design (scenic, Michael Yeargan; costume Martin Pakledinaz; lighting, James F. Ingalls, and projection, Wendall K. Harrington. In the 10 years since its premiere, it’s lost none of its freshness. With its San Francisco 1915 setting, its period photos of the Farallones, the wrought-iron arches of the Conservatory; the wonderfully festive period costumes in the party scene, the furniture’s japonoiserie, the old-fashioned Christmas cards, even the butterflies — with not a candy in sight, San Francisco Ballet’s has to be one of the sweetest Nutcrackers of all.