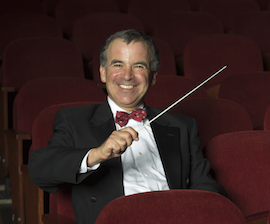 It wasn’t just the free admission which made the San Francisco Chamber Orchestra’s program accessible this weekend, nor was the complimentary arrangement the only excuse for the full house at the Herbst Theatre on Friday evening.

Titled "Dance Suite," the program proved the SFCO’s ability to transverse three centuries of music with consistent liveliness, grace, and skill, all the while securing the grateful engagement of an informally attired audience spanning several generations. J.S. Bach’s Orchestral Suite based on Baroque dances (No. 2 in B Minor) was first up. In the Lentement and Vite sections of the Suite’s Overture, the ensemble introduced its sound as unstuffy and youthful. Performance of the quicker of the ensuing dance movements suggested that the SFCO might have functioned favorably in a classic ballroom, the sections of the ensemble — first and second violins, violas, and cellos — handsomely partnering, underscored by a double bass and led in various parts by a single flute.

Flautist Mindy Rosenfeld and principal cellist Robert Howard provided a particularly pretty exchange in the Polonaise, in which they and the rest of the ensemble discovered devilish delight in the details of Baroque ornamentation. Although the slower Menuet sounded slightly blurred — and thus atypical of SFCO readings — the Suite’s famous final movement, the Badinerie, was delivered fresh by the flute, the strings responding in similarly zesty spirit.

The other venerable composer on the program, Edvard Grieg, received equally respectful and invigorating treatment for his From Holberg’s Time, composed with an ear to Baroque forms and as a tribute to a fellow Norwegian, playwright Ludvig Holberg, who was a contemporary of Bach’s. In the piece’s sweet and familiar Praelude — and throughout the evening — SFCO Conductor and Music Director Benjamin Simon evinced a visually perceptible concern for and mastery of dynamics, extending his body and his energy towards his various sections, and obviously enjoying the process. Grieg provided in this piece ample evidence of his own ability to master and make over older forms with a breadth of expression, expanding into the mellow mood of the Sarabande, an affectionate Gavotte & Musette, pathos in an Air, and the perkiness of the concluding Rigaudon.

That pair of suites framed two works by living composers, one of them John Corigliano’s 1976 retooling of his earlier choral setting of a Baudelaire poem. The Voyage served as a solo showcase for SFCO concertmaster Robin Sharp, who conjured a glistening, alluring acoustic elixir, adoringly supported by the rest of the ensemble.

Twenty-five-year-old Michael Gilbertson was there to enjoy the world premiere of his Concerto for Guitar and String Orchestra. A young composer could not have hoped for better than a commission from and performance by a sensitive, competent ensemble like the SFCO, with dynamic 28-year-old guitarist Benjamin Pila as guest soloist. The event was enhanced by conductor Simon, channeling Leonard Bernstein through a spoken introduction to the innovations and challenges of the work’s three movements.

The opening Serenade in B had the strings wafting around the guitar’s pedal point on the title tone, evoking the sort of shimmering nocturnal landscapes created by big band jazz composer Maria Schneider. Gilbertson then contributed to the evening’s “dance” theme with an imaginative Chaconne After Dowland, based on the Renaissance composer’s Weep You No More, Sad Fountains. The finishing Urgent, Unrelenting allowed the composer and instrumentalist to execute an homage to heavy metal, inviting the gamely strings to follow course. Although Gilbertson’s overarching intent was never clear, his piece commanded attention and a spirited commitment impressively supplied by this ensemble and soloist.