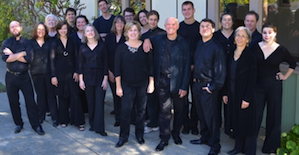 “Even for those of you who have been to many San Francisco Choral Artists concerts, this one is a little on the wild side,” said Artistic Director Magen Solomon at the start of Saturday evening’s performance. Staged in the exquisite St. Gregory of Nyssa Episcopal Church near Potrero Hill, the SFCA performed a series of no fewer than 22 miniature musical gems that composed the second program of its season, called “Voices of Women.”

I initially bristled at the concert’s title, for a program dedicated to women’s music seems to suggest its inherent inability to compete with the “boys” of classical music. However, I was soon swept away by SFCA’s expertly curated and engaging performance.

The concert was divided into seven sections, with one to four songs per unit. The first half was woven together by three Pauline Oliveros compositions, beginning with the strangely evocative and delectable Rock Piece. During the work, every singer tapped two rocks together in a rhythmic pattern unique to each performer. The audience is thus able both to listen to the rocks as a group and to focus in on particularly attractive patterns.

The second Oliveros thread was Humming Piece, which included some audience participation. The choir, each singer humming a unique pitch, surrounded the audience, creating a throbbing sonic orb. While I felt a bit as if I was part of some strange New Age cult, I did enjoy the sensation.

Perhaps the strongest portion of a solid first half was the subsection “Patterns.” It consisted of three whimsical pieces, including the premiere of Composer-Not-in-Residence Eleanor Aversa’s lustrous Probably Helical. Aversa set portions of DNA scientist Rosalind Franklin’s articles to lush harmonies, redolent of Aversa’s time in the Russian Orthodox church.

So often overwrought in other choral works, the use of vocal percussion in Diu Diu Deng was refreshing and delightful.

“Patterns” also included an absolutely charming piece by Chen Yi. The text of Diu Diu Deng discusses a journey by train to look at the tea-picking girls. The music features vocal percussion, marvelously executed by the SFCA singers. So often overwrought in other choral works, the use of vocal percussion in Diu Diu Deng was refreshing and delightful.

The final piece of both “Patterns” and the first half was Oliveros’ amusingly odd Sound Patterns. Like the composer’s other offerings, this work challenges the listener’s conception of what “music” consists of, but does so in a decidedly warm and funny manner.

The low point of the first half was another world premiere, this one by Composer-In-Residence Mark Winges. Although anima gaia did not lack appeal, it simply did not shine as brightly as its compatriots. Its faults rested largely in the composer’s use of nonsense sounds, which might be described as Pat Metheny-esque. While I attempted to focus on the bubbly waves of verdant harmonies, my mind kept wandering back to Winges’ perplexing use of these sounds. Whatever the composer’s intent, their constant presence left me bewildered.

Emily Jiang’s use of tone clusters created shimmering overtones that became an aural representation of moonlight.

The program’s second half featured its own set of musical jewels. In addition to Britten’s opulent Hymn to St. Cecilia, which featured the bright, crystalline voice of soprano Carol Walker, the second half also brought Vaclav Nelhybel’s curious piece, Mary, Molly, and June, as well as Leanne Daharja Veitch’s darling Black-eyed Susan.

Two pieces about the moon by Bay Area composer Emily Jiang shone especially brightly in a subsection dedicated to “Night.” Jiang’s use of tone clusters created shimmering overtones that became an aural representation of moonlight. Jiang’s sense for text-setting (assuredly driven by her experience as a poet) is impeccable.

Although SFCA’s soprano section occasionally struggled in the higher registers, and the tenors sometimes sounded a bit pinched, this concert was absolutely fantastic. A performance by S.F. Choral Artists exemplifies contemporary choral music at its best. And Solomon’s feel for programming is superb, so if this is her “wild” side, I hope she keeps listening to her feral instincts.