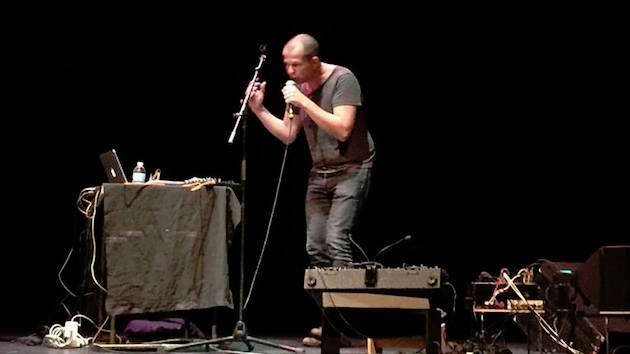 Even after 16 seasons of the San Francisco Electronic Music Festival, it’s impossible to walk out of a performance with expectations intact. Ideas that, on paper, might seem cerebral — music formed by modulating circuits, for example — are, in performance, thrilling. Instruments invented in the Baroque era prove their viability as 21st-century tools.

These were among the surprises of the festival’s fourth event, on September 10 at the Brava Theater: Using technology to augment the possibilities of their respective instruments, each of the three solo performers — Thea Farhadian, Alessandro Bosetti, and Arcane Device — shone in different ways. 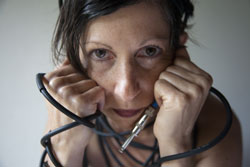 In a series of short pieces, Thea Farhadian, a former member of Berkeley Symphony, showcased seemingly endless combinations of sounds formed by live violin digitally processed with Max/MSP. Triggering responses through a variety of techniques — semipitched pops of sound created by tapping her bow on dampened strings, isolated pizzicato gestures, lyrical double-stops — Farhadian proved beyond doubt the appeal of the violin in a field that in the past shied away from the use of acoustic instruments.

If Farhadian’s set was compelling for its technical and imaginative scope, Alessandro Bosetti’s was rewarding for its strong compositional premise. His large-scale work, Plane/Talea #6 samples thousands of fragments of voices to create what he calls “an impossible choir” — a sonic utopia of imagined community. Integral to the music are Bosetti’s live vocalizations, initially murmured into the microphone and obscured by increasingly cacophonous feedback, and later, recited with the expressive cadences of a cantor.

In several sections, Bosetti — whose work explores spoken language — drops out in order to let the samples shine. Isolated vowels, organized into distinctive melodic contours, form repetitive patterns — it’s the postmodern isorhythm to which the title refers. Later, he seems to quote The Magic Flute through a progressive layering of the sound “Hoo” into a mass of ascending lines.

But the most remarkable aspect of Plane/Talea #6 is Bosetti’s own singing, in particular his expressive lamentations. which form a kind of heterophony with the generated feedback — all against a strikingly minimal, floor-shaking bass line. Performing this passage, Bosetti brought to the stage a vulnerability rarely present in electronic music, and this emotional impact more than compensated for some clunky transitions earlier in the piece. 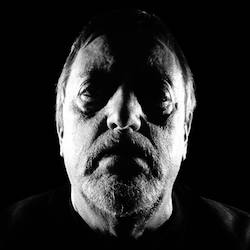 New York-based composer David Lee Myers (a.k.a. Arcane Device) has been called “the elder statesman of noise music,” and his performance — in which he manipulated a feedback machine — was, on the surface, the most traditional of the bunch.

Myers’s masterful crossFeed, however, is far more dynamic in performance than most works of its ilk. There’s little need to watch his hands, but in place of human movement, there are stunning visuals interpreted in real time from the audio processors he controls (see video below). These projections are in the same family of visuals that have been popular since Fantasia: abstract yet evocative lines that wiggle, morph, converge and diverge across the screen in accordance with the sounds being played. But Myers’s work far surpasses the simplistic graphics that other composers of his generation doggedly create: It has the sleek polish of current graphic design, yet the structure of complex oscilloscope patterns: In short, it’s the best responsive video circuitry I’ve ever seen.

crossFeed’s sounds, themselves, drift in and out: Many sections are rhythmically regular; others are pure noise. Myers describes much of his work as using simple technologies to capture and organize sources into soundscapes that are “neither completely random science nor the gesture of an artist’s hand, but something between the two.” This basic yet overarching aesthetic sensibility constructs a trance-like continuity between noisy static, rhythmic buzzes, and the high, celestial drones toward the end of the piece — which was, on Saturday, the perfect ending to an invigorating program.