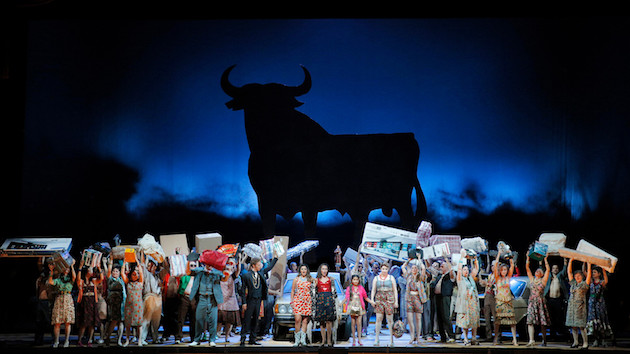 Just after intermission, as the gripping final acts of San Francisco Opera’s Carmen get underway at the War Memorial Opera House, a dancer (Marcos Vedovetto) saunters onstage, strips bare and exults in his nudity, pausing to slap his own buttocks as he wanders about in the nighttime mountain air. The act ends with something just as startling — a violent scenic coup that made the Friday, May 27, opening-night audience take in a collective breath, as if they feared for their own safety.

Such are the sort of emphatic marks the controversy-magnet Catalan director Calixto Bieito can leave on a production. But what counts here, in what is by reputation one of his more straightforward outings, is not auteurist stuntsmanship but the deeply riven arc of love’s power to destroy that Bieito carves through Bizet’s masterwork. First mounted in 1999, this widely traveled Carmen is making an auspicious U.S. debut.

Restaged by Joan Anton Rechi, the double-cast San Francisco production (through July 3) is a harrowing triumph. In its stark and disturbing final act, which begins with an alarming throng of frenzied bullfight fans storming to the front of the stage, the final scene between the proud and reckless title character and her spurned lover Don José pulses with an almost frightening charge. While somewhat slow to take shape in its opening acts, this is a raw, emotionally confrontational Carmen, insisting that the audience look straight into the eye of passion’s pitiless storm. 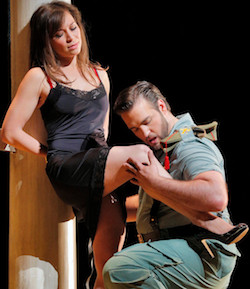 Mezzo-soprano Irene Roberts and tenor Brian Jagde were magnificently real in their final, fated scene. Left alone in the voracious, gray void of Alfons Flores’ set and Gary Marder’s lighting, with nothing but a stylized bullring chalked on the ground, Roberts used her velvet-and-steel voice and compact, knowingly seductive body to draw her character’s determination to live and love freely like a line in the sand.

Jagde, his voice by turns chastely pleading, menacing and desperately stretched, staggered like a puppet coming loose from his strings. Here is the final, inevitable undoing of a beefy, hometown boy who gets in over his head with a woman who has reeled him in and cut him off. It’s a terrible, transfixing thing to witness.

While that climax delivers the evening’s crowning blow, there are moments of high operatic impact throughout. Soprano Ellie Dehn’s heartrending performance as Micaëla, the small-town girl who pursues Don José with puppy-dog devotion and a wolfish fixity of purpose, turned her two arias into musically splendid, psychologically complex revelations. Her tender, expansive voice caressed every phrase for meaning. 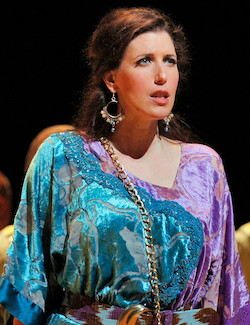 In a small but fascinating touch, after persuading Don José to come home and see his dying mother, Dehn’s Micaëla tossed an obscene gesture at Carmen. With that, it suddenly seemed possible that this ostensibly sweet-natured girl, who first appears in a surprisingly gaudy outfit of sequined slacks and top (costumes by Mercè Paloma), might be lying about his mother to lure Don José away. With everyone playing for high stakes, the wheels keep whirling with unpredictable velocity.

It takes a while for the heat and light of this Carmen to fully take hold. The first act, with a telephone booth and phallic flagpole as its scenery, is a blunt instrument. “Look at these insolent bitches,” goes a characteristic line in the supertitles, a capsule view the soldiers take of Carmen and her fellow cigarette-factory workers. Conductor Carlo Montanaro mirrored the mood. From the jittery overture on, he managed the score with a bright, often caustic, keen edge.

Roberts, whose performance ripened later on, wore the heroine’s sexuality like armor plating at the outset. Her “Habanera” was a near-mechanical exercise in seduction. When she set her sights on Don José, she cozied up directly to his crotch. The theme of jealousy is a visual illustration, with Carmen, her would-be captor Don José, and his fellow solider Zuniga (bass-baritone Brad Walker) faced off in a triangle. When Carmen ducks into the phone booth, the soldiers surround the glass case in a threatening, insect-like swarm. A final image — a scantily clad woman run up the flagpole — hammers home the point about male power.

As the production barrels on to the Act II tavern scene, staged here as a kind of outdoor tailgate party, the dangerous energy begins to combust. Car doors slam. Headlights glare at the audience. The fight scenes are brutal. Carmen joins forces with a pair of dubious women friends (tauntingly sung by Amina Edris and Renée Rapier). Only the toreador Escamillo, played in an undercharged performance by baritone Zachary Nelson, seems out of step with the brawny, unstable happenings.

Whatever the first two acts may lack in dynamism and cohesiveness, the second two pay off with sustained high dividends. When Carmen and Don José circle each other in that bullring, they’re playing out a destiny that’s much bigger than the two of them.

As the far-off cheers of the bloodthirsty bullfight crowd filter in, these ruined lovers are haunted by the anguish and danger all men and women undergo when love pulls them together and tears them apart. Stunning and dramatically compelling as they are, Roberts and Jagde are swallowed up in all that space, fated to play out that grim, familiar story once again. 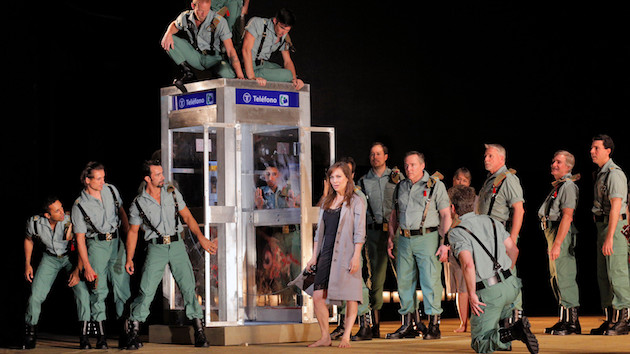