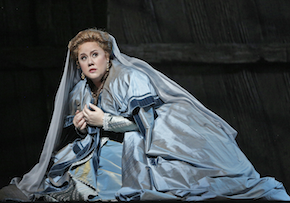 It was the closest Giuseppe Verdi’s ambitions would ever take him to an operatic King Lear, but he had to drop that project for a more feasible one.  Verdi’s masterpiece of misplaced intentions, A Masked Ball (Un ballo in maschera) opened at the San Francisco Opera on Saturday night in a lavish, if dated, period production, last mounted here in 2006. John Conklin’s costumes, worthy of a Zeffirelli extravaganza, go back to the 1977 era of Kurt Herbert Adler. If the production seemed deja vu, the work remains fresh and unhackneyed, a tragedy unique in the Verdi canon, with human frailties but no real evildoers.

The action has a king’s misplaced love for the wife of his best friend leading to expected tragedy, but it is the manner of the story’s treatment that explores new shadings of human understanding with a dose of Shakespearean jest (left over from Lear?), keeping the tone on a lighter plane than the story’s ill-fated conclusion might suggest. With moods switching on a dime, Masked Ball foreshadows Verdi’s last two Shakespeare operas. Call it a tragedy with comic relief.

The story, based on the actual assassination in 1792 of King Gustavus of Sweden, was moved by Verdi and his librettist Antonio Somma to colonial Boston, as partially determined by an agreement with the censors at the time of the work’s premiere. As is now customary, the SFO staging honors the creators’ original intentions by returning the action to 18th-century Sweden. As a result, opening night audiences encountered one peculiarity: hearing Italian names sung as they saw Swedish equivalents on the supertitle screen.

Director Jose Maria Condemi embraces a production he did not design (owned by the SFO but created for Washington National Opera), maneuvering his protagonists around the period scenery with wit and flair, and wherever possible also emphasizing lighthearted gestures, as if to foil too much dwelling on tragedy. Though retro, the production does not appear fusty; its successive scenes unfold impressively. 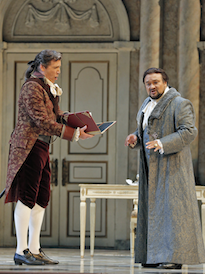 Making her company debut in the role of Amelia was Julianna Di Giacomo, a soprano now scaling the heights of her early career. Already well known in Rome, Berlin, and Vienna (and yes, even in Sweden), she was born and raised just down the coast in Santa Monica, CA. She brought exceptional sweetness of tone and vocal sheen, along with control and power to match the large orchestra. Her “Ma dall'arido stelo divulsa" (seeking an herb to rid her infatuation of the king) and later “Morrò, ma prima in grazia” (I shall die, but one last wish), brought the largest audience applauses of the evening. Her Amelia inhabited the work’s emotional center. San Franciscans will undoubtedly see and hear more in the future from this artist.

Thomas Hampson’s Renato was a standout as Amelia’s husband and the best friend of Riccardo (at least until he shoots the king dead in the last act). Placed high in the baritone register, the role is happy hunting ground for Hampson, who, at age 59 shows no sign of vocal wear and tear; if anything his instrument has only grown in power. Matching Di Giacomo’s projection with an enunciation that remains a wonder of the opera stage, Hampson’s performance was charismatic and commanding. His Renato’s sea change in affections between the Act 1 “Alla vita che t'arride” (warning the king of conspiracy) and in the Act 3 “Eri tu che macchiavi quell'anima” (It was you, king, who stained this soul) projected convincing anger. 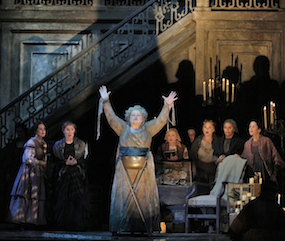 The role of Riccardo is a dramatic cousin to the heedless Duke in Rigoletto, but this king is infinitely sweeter in nature. His weaknesses are to let his affections wander where they shouldn’t and neglect attention and advice in his office. Mexican tenor Ramón Vargas’ Riccardo possesses a pleasant if smallish voice and a fine sense of character; he even jumps gamely off stage rocks. But he’s no match in charisma or vocal power for the two other principals. Vargas does vary nicely his moods from the ardent “La rivedrà nell'estasi” (With rapture I shall look upon her) to the fisherman siciliana he sings in a disguise, but his best moments come at his end-of-life invocation of forgiveness, confirming the work’s cathartic reconciliation.

Ulrica lies low in the voice for a mezzo, but Dolora Zajick’s vocal artistry owns these kinds of Verdi roles and her portrayal here was up to her usual high standards as the best available fortuneteller in the business. Gary Marder’s floor lights cast wall shadows that lend Zajick’s “Re dell'abisso, affrettati” (King of the abyss make haste) further supernatural authority as the voice never to ignore in the prophecy arena.

A character that simply lights up the stage is the irrepressible trouser soprano of Oscar, cast brilliantly and sung with crystalline insouciance by Heidi Stober, her every appearance a source of delight. It’s a unique role in all Verdi: a character like Mozart’s Cherubino and Strauss’ Octavian appearing midway in operatic history between them. Here, as elsewhere, Condemi’s direction rose above mere caretaking, as he made Oscar the butt of jokes as others steal his hat and toss it about. Oscar’s endearing loyalties defend Ulrica in “Volta la terrea” (That tense countenance) and resist revealing the king’s identity in “Saper vorreste” (You want to know how he is dressed). 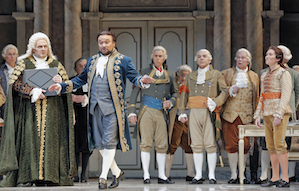 Of the remaining characters, special mention goes to Efraín Solís’ Silvano, the fisherman secretly helped along by the king, and who almost steals the show in the process. Also notable were the conspirators Sam and Tom, sung by basses Christian Van Horn and Scott Conner.

Given that Un ballo in maschera was premiered in the same year that Wagner finished his Tristan und Isolde, comparisons, largely erroneous in my opinion, have been drawn between the two. It cannot be denied, however, that both works show their respective composers growing in the achievement of new orchestral sonorities.

Supporting Verdi’s exalted vocal lyricism in this work is an orchestra of quicksilver colorings, augmented by an English horn that wraps itself around Amelia’s Act 1 aria and the plaintive cello that performs a similar service in her final one. A cimbasso, an offstage bell, a patriotic wind band, and a small string ensemble at the ball keep the ears constantly stimulated. Unlike the occasional longeurs of Wagner, especially in Tristan, Verdi’s crisp, mercurial score never outlasts its welcome.

Conductor Nicola Luisotti’s brisk and decisive accents maintained a high level of orchestral execution and rhythmic coordination with his singers, particularly notable for such a complex score on its opening night performance.