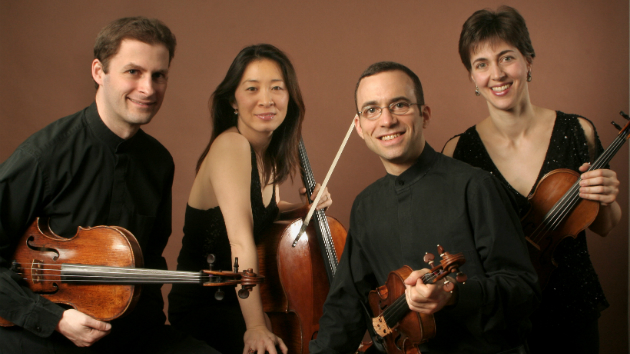 For a group whose namesake is Beethoven’s presumed “immortal beloved,” the Brentano String Quartet — Mark Steinberg and Serena Canin, violins; Misha Amory, viola; and Nina Lee, cello — displayed considerable range on Sunday night at the SFJAZZ Center. The program featured quartets by Debussy and Haydn, but the main event was the West Coast premiere of Vijay Iyer’s Time, Place, Action for piano quintet, with the composer on piano.

In addition to recording Beethoven’s late quartets, the Brentano Quartet has recently performed works by Renaissance composers Josquin des Prez and Carlo Gesualdo, as well as by contemporary composers ranging from Charles Wuorinen to Gabriela Lena Frank. Iyer’s musical vocabulary is as varied. Originally a classically trained violinist, he taught himself piano; with his trio, he performs music that is most accurately classified as jazz. Yet, as a composer Iyer transcends genre. He describes his music as prioritizing interaction and spontaneity — he wrote his Ph.D. dissertation on music cognition — rather than any school of composition. Time, Place, Action is his second work for the Brentano Quartet.

The first two movements are the strongest of the work. Iyer develops an unrelenting seven-note motif that recalls Debussy in the finest way. While the strings play a series of sound-masses that morph in and out of unison, the piano emerges with a series of undulating, otherworldly arpeggios.

The rest of the piece is uneven. In the fourth movement Iyer establishes a repeating rhythmic pattern or “groove” in the strings, which is much more compelling than the improvised piano solo it supports. The final movement opens with a curiously lilting ostinato, but the subsequent section — a hammered-out progression of modal chords — is interminable. Luckily, Iyer’s writing subdues itself in enough time for a poignant ending.

In this respect, the program’s surprise addition of Iyer’s new piano piece, Meta-Études, was unnecessary. It was an unmemorable piece that, although pleasant, did not tell the audience anything about Iyer that they had not already heard.

If played well, Haydn’s Op. 50 No. 1 can be as funny and touching as the famous “Joke” Quartet, Op. 33 No. 2, of six years earlier. Unfortunately, the Brentano’s ascetic performance was too staid to elicit any emotional response. First violinist Steinberg’s characteristically thin sound was appropriate in the galant minuet and trio, but ineffectual elsewhere. The first movement’s tumultuous development section lacked angst, and the folksy finale was reserved instead of rustic. If not for second violinist Canin’s personable phrasing and violist Amory’s rich accompaniment, the work’s surprises — deceptive cadences, false recapitulations — would have been lost.

The evening’s finale, Debussy’s String Quartet, suffered from the same problem. Although in the first movement the inner voices’ secondary melodies were delightfully thick, the primary theme lacked the forte dynamic and decisive character Debussy so clearly indicates. Taking great pains to dampen their strummed chords, the group eradicated any sense of playfulness from the second movement.

Thankfully, the third and fourth movements were more expressive. The romantic Andantino generally needed more substance, but the group’s restrained approach proved effective in the final measures, which were pristine — a feat in D-flat major.

The Brentano Quartet maintained exceptional coordination throughout the Debussy’s many demands. Cellist Lee consistently provided a strong rhythmic foundation. Had the group played the Haydn and Debussy quartets with as much intention as it gave the Iyer quintet, it would have been an exciting — rather than merely competent — performance.