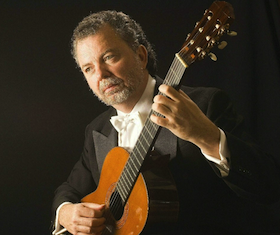 The philosopher Friedrich Nietzsche made a distinction between two aesthetic orientations that he called the Apollonian and the Dionysiac. He saw the Apollonian (named for the Greek god Apollo) as rational and balanced, the Dionysiac (named for the god Dionysus) as emotional and ecstatic. Nietzsche called for a fusion of these two sides of man, and classical guitarist Manuel Barrueco obliged in a well-balanced, emotionally intense recital on Sunday night, presented by San Francisco Performances and The Omni Foundation for the Performing Arts at SFJAZZ. He gave the carefully structured Baroque music of J.S. Bach and Domenico Scarlatti, which made up the first half of the recital, dramatic and colorful readings. In the second half, he gave the fiery and passionate music of the Spanish nationalists Isaac Albéniz and Joaquin Turina interpretations that gained power from their perfectly proportioned classical balance.

Barrueco is justly renowned for his performances and recordings of the intricate and complex sonatas that Bach originally wrote for solo violin, so it was fascinating to hear the very different approach he took in this recital with the more spacious Suite BWV 1007, originally written for solo cello. Bach’s writing for violin is comparatively full harmonically and complex contrapuntally. In his compositions for the larger cello, Bach mostly eschews four-note chords and fugal textures and instead takes full advantage of style brisé, an instrumental texture that unpredictably changes the register of notes in a melodic line to create the effect of more than one independent voice. Barrueco marvelously produced a variety of articulation, color, and dynamics on his guitar to clearly project the counterpoint in a manner probably beyond the capacity of the cello. He clarified the harmony and at the same time compensated for the guitar’s smaller tone by adding bass lines implied by Bach’s original. Each dance was given its characteristic rhythmic profile; Barrueco’s added ornamentation, stunningly clear and effortless, gave this familiar and much-loved music a delightful freshness.

Barrueco captured the flexibility of the human voice in the cantabile movements and enthusiastically embraced the dance rhythms in the concluding sonata.

Born in Italy in 1685, the same year as Bach, Domenico Scarlatti is best known for his 555 wonderful sonatas for harpsichord, each animated by novel expressive details with extraordinary harmonic effects superimposed on a clear tonal foundation. The style is unmistakably Baroque and entirely different from that of Bach. Much of its originality can be traced to the influence of both Spanish popular music and the many sonorities typical of guitar music, including internal pedals, chords built on the interval of a fourth, and note clusters reminiscent of guitar strumming.

Barrueco began his set of five Sonatas with soulful interpretations of three minor-key works: the graceful Sonata in E Minor, K.11; the songlike Sonata in D Minor, K. 27; and the fiery Sonata in B Minor, K. 27. The set concluded with two major-key works: the ornately embellished Sonata in E-flat Major, K. 474; and the exuberant Sonata in E Major, K. 531. Barrueco captured the flexibility of the human voice in the cantabile movements and enthusiastically embraced the dance rhythms in the concluding sonata.

Scarlatti’s use of Iberian folk and flamenco traditions provided a graceful transition to the Spanish music of the late 19th and early 20th centuries that Barrueco performed in his recital’s second section. This artist has been considered the premier interpreter of the music of Isaac Albéniz since he burst on the scene in 1975. His performances of this music have both ease and depth. The too-little-played Preludio from España, Op. 165, and the Rumores de la Caleta bristled with improvisatory energy; the Tango from España was supple and loose limbed; and both Córdoba and Torre Bermeja painted evocative and impressionistic portraits of Spanish landscapes.

The fusion of Apollonian and the Dionysiac approaches to art is embodied in the music of Joaquin Turina.

The fusion of Apollonian and the Dionysiac approaches to art is embodied in the music of Joaquin Turina. As a young man, he wrote music in the style of the French Impressionist composers, but in 1907, after Isaac Albéniz recommended that he devote his attention to Spanish folk music and flamenco, he strove to capture the color and vitality of southern Spain. Barrueco’s newest recording includes a concerto for guitar and orchestra by the renowned flamenco guitarist Manolo Sanlúcar; Barrueco brought a fresh insight into the flamenco inspiration behind Turina’s classical Sonata, Op. 61. The rhythms were crisp, the rasgueado was fiery, and every note was perfectly placed.

The enthusiastic audience at SFJAZZ was rewarded with two encores: the charming Cajita de Música (The music box), by Francisco Tárrega, with its intricate passages in harmonics; and the intimate and soothing Scherzino Mexicano, by Manuel Ponce.