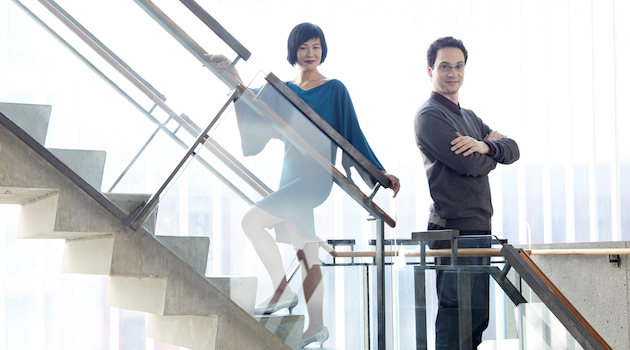 The premise of “Bridge to Beethoven,” a project of violinist Jennifer Koh and pianist Shai Wosner, doesn’t position its composers for easy success. Over the course of four programs, the duo plays all ten Beethoven sonatas along with new compositions designed to ignite conversation about the repertoire. But it’s a rare occasion that a composer’s new work can enrich a listener’s experience of existing music so perfect, let alone stand next to Beethoven on a program and hold its own. Unfortunately, the new composition by Andrew Norman — featured in the third “Bridge to Beethoven” program, performed on March 30 at Herbst Theatre — didn’t pass muster.

Norman, who was recently appointed assistant professor at the USC Thornton School of Music, is the only composer featured in “Bridge to Beethoven” to write a multimovement work that weaves in and out of the program rather than a single work that responds to a specific sonata. His three, short Bridging movements introduce — and in one instance, transition between — the three Sonatas, Op. 30.

But Beethoven’s sonatas need no introduction, and the quietly unfolding A Major Sonata, Op. 30 No. 1, would have been a much more compelling opening to the program than Norman’s Bridging I, a cluttered mixture of classical harmonic idioms, meandering motives, and crunching bows. Beethoven’s work commences only to stutter to a halt in its final lines, which Norman fragments and spins with added harmonies until the material becomes unrecognizable.

Bridging II is stronger in concept than Bridging I, but this fragmentation idea feels tired upon repeat (in reverse, with Norman’s lines gradually morphing into the whirling opening strains of the G Major Sonata, Op. 30 No. 3). The cascading piano lines and time-suspending violin part in Bridging III, the final interlude, can’t help but draw unfavorable comparisons to Messiaen. Commercial-sounding major seventh chords at the movement’s end come offensively close to touching the opening of Beethoven’s C Minor Sonata, Op. 30 No. 2.

This last bridge feels especially superfluous after an intermission. The transmogrification of Norman into Beethoven isn’t profound or particularly playful, but rather, reads as a gleefully found solution to the invented problem of linking the three keys of the Op. 30 sonatas — much like the harmony assignments that direct students to modulate from A major to F-sharp major using but four chords. This music doesn’t serve Norman as a composer: Though moments have charm, Bridging says little about Norman’s compositional strengths and values. 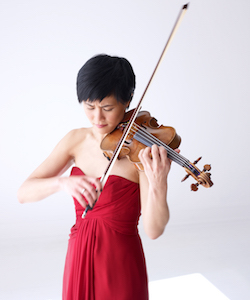 These interludes, however, were only brief intrusions on an enchanting performance by Koh and Wosner that distinctly characterized each of the Op. 30 sonatas, written between 1801 and 1802. Beethoven’s writing in the A Major Sonata is unusually gentle (a too-dramatic finale, set aside, eventually became the finale of the “Kreutzer” Sonata), and Koh and Wosner’s unhurried playing savored each phrase’s turn. Wosner has uncommonly light fingers, and his melodic attention to the florid lines in the variations movement was particularly impressive. The outer movements of the comparably energetic G Major Sonata, though initially reserved, grew delightfully raucous as the performance went on. Koh makes the most out of every bow she draws, and seemed to play the slow movement’s cantabile melodies in one uninterrupted stroke.

The C Minor Sonata, though not significantly longer than the other works, feels monumental in character; appropriately, the duo’s playing intensified here. With strong dynamic contrasts and rigidly upright dotted rhythms, Koh and Wosner heightened the drama of the first movement, and the rhythmically disorienting accents jolted increasingly with each repeat of the scherzo. The slow movement was dense and meticulous, yet sweet.

As a duet, Koh and Wosner play so well that inherently challenging passages — such as the sudden takeoff of unison scales in the slow movement of the C Minor Sonata — nearly pass by unnoticed. Beethoven described these works as piano sonatas with accompanying violin, but this performance represented a true partnership.