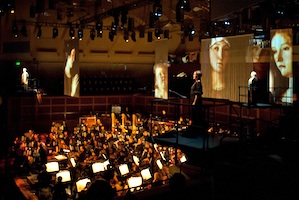 Religious mysticism has inspired composers throughout music history, from Hildegard of Bingen in the 12th century to James MacMillan in our own time, by way of Wagner, Messiaen, and many others. Le Martyr de Saint Sébastien, which received transporting performances this week at San Francisco Symphony, must be one of the strangest works to emerge from this rich tradition.

Written as a mystery play, Martyr was first and foremost created as a vehicle for the unique talents of the dancer and music patron Ida Rubinstein, who made up in dramatic ability what skill she lacked from a very late start as a dancer. With an extremely long text by poet Gabriele d'Annunzio and about an hour of music by Claude Debussy (and, likely, André Caplet, who orchestrated the piece), its 1911 premiere lasted five hours. Since then, it has rarely been performed in full; instead, it is typically performed as an oratorio or as orchestral excerpts, stripped of its theatrical and choreographic elements. 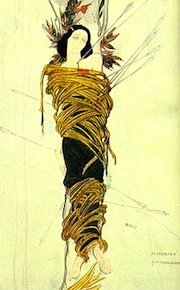 For these performances, SFS opted for a highly effective multimedia production that suggested the spectacular elements of Martyr while emphasizing its beautiful music and religious mystery. The darkened hall and stage kept attention focused on the singers and narrator, who were simply costumed and who performed from three small platforms set at terrace level. Above the orchestra, video and photographic images were projected onto several large panels of gauze. These included forests, Renaissance paintings, flickering flames, and abstract images, all appropriate for the text.

Debussy's music, in five sections corresponding to the five acts of D'Annunzio's play, is as beautiful and elusive as anything he ever wrote. Sometimes he invokes the Wagner of Tristan und Isolde, notably when the brothers sing of their love and in the English horn solo in the fourth section. Sometimes he echoes medieval and Renaissance harmonies, as in the long a cappella chorus near the end of the piece. It's transcendently lush and beautiful, richly orchestrated, and, like the text, almost decadent in tone. 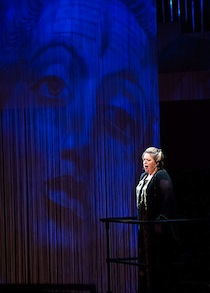 San Francisco Ballet principal dancer Damien Smith and narrator Frederica von Stade split the nonsinging role of Saint Sébastien, with Smith, stripped to his shorts, appearing only in the video projections. The great mezzo-soprano made an impassioned, ecstatic Sébastien, adding yet another great role even in retirement. Soprano Karina Gauvin soared in her solos and Joanna Taber was a fine Celestial Voice.

The Symphony Chorus turned in another masterly performance, enunciating the French text idiomatically and singing with both power and transparent beauty. MTT's love of French music, and his excellence in conducting it, are no secret in San Francisco; this was another exemplary performance. He put across all the mystery and beauty of the score, all of its suspended time moments, all of its grandeur and ecstacy, with pitch-perfect pacing and orchestral balance. Anne Patterson directed and designed the production, including the gravely beautiful costumes; Matthew Frey was the excellent lighting designer.

And how do you open a program that focuses on Martyr? With a work radically different in style and spirit: Janáček's exuberant, compact, and entirely secular Sinfonietta. Composed in 1926 for an orchestra that includes an astounding 26 brass, it is typical late Janáček, its larger structures built from small melodic fragments. MTT and the symphony gave the Sinfonietta a delightful whirlwind of a performance, emphasizing its ceremonial elements while allowing the puckish folk elements their due. Hats off to those many brass, nine of whom were arrayed in the terrace above the orchestra, for their spectacularly unified sound and rock-solid tuning; hats off to the flutes for their lightning-bolt performance in the third movement, and to English horn player Russ deLuna for his beautiful solos in both the Janáček and Debussy.