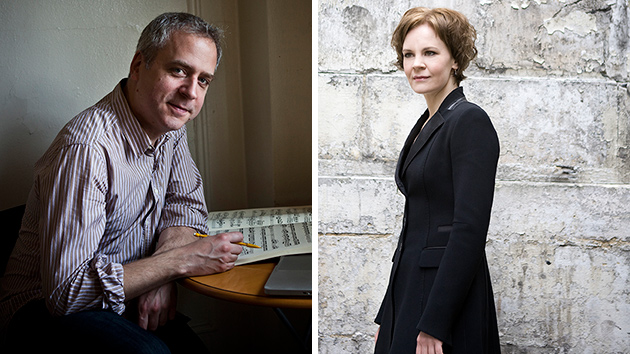 Those who arrived right on time at Davies Symphony Hall for the 8 p.m. San Francisco Symphony concert Saturday were an hour late. Certainly, there were some interesting doings to come: a stellar return here of Finnish guest conductor Susanna Mälkki, a curiously unaffecting rendition of Bartók’s Third piano concerto by the admirable Jeremy Denk, and, to begin with, a climactic 30 seconds of ecstasy in a seven-minute “aperitif” not heard here since the Loma Prieta earthquake.

What the severely punctual patrons missed at 7 p.m. was the best pre-concert speaker I have heard since Nuvi Mehta dressed up as Edward Elgar for the San Diego Symphony in 2009 — namely, the S.F. Conservatory’s Musicianship Chair and S.F. Symphony annotator Scott Foglesong. It was he who delightfully characterized Charles Thomlinson Griffes’ The White Peacock as an aperitif “all fragrance and innuendo.” As he played excerpts for the audience he exclaimed, “Only a little bit and I’m already getting dizzy!” He then went on to declare the “jewelbox” of Brahms’ Second Symphony a “miracle,” and demonstrate how two motives that open the work were used to construct the symphony “like making a whole dinner out of an egg and a cup of water.” Foglesong’s advance preparation, humor, and ability to connect are a model that should properly be supported as a performing art and advertised by sponsoring organizations. Failures in this area have been far too legion.

Griffes was an American composer of promise, but he died in 1920 at 35. At the time, he was deeply enmeshed in the alluring soundworlds of Wagner, Debussy, and Scriabin. His Peacock begins like Debussy’s faun, Languidamente, slowly strutting around a lush garden at noon (according to William Sharp’s poem that inspired the piece) “as though through the noontide a dream of moonlight were real for a moment.” A series of seventh harmonies quickly climax on a suspended C Major chord as the peacock opens his fan. Then the intoxicating music — however immaterially derivative — dies away “pale as the breath of blue smoke in the far woodlands,” perfectly captured under Mälkki’s batonless direction. I hope this music will be exhaled again before the next Loma Prieta.

Mälkki really got to shine in the Brahms ...the second movement really benefited with her expertise in dynamics and bringing out accents. Her example will be an inspiration for many, many to follow. Bring her back to San Francisco!

Moving on from a last gasp of the pre-WW1 age, Mälkki proceeded to get down to business with Denk and the concerto, often cited as the most audience-friendly of Bartók’s three. To emphasize this characteristic, Foglesong assured the pre-concert audience, that in contrast with the other more percussive concertos, the composer’s first name for this one was “Béla, not Bam-Bam.” Indeed, Denk played with considerable heart, especially in the chorale-like second movement, and nicely aligned with Mälkki, provided a spirited finale. In the first movement, however, I had trouble clearly hearing the many closely spaced figurations that invite fingers to tangle themselves in what, in contrast to Rachmaninov, sounds like a small-hand concerto. Next time, bring on the Bam-Bam of Number 1 or 2.

Mälkki really got to shine in the Brahms after intermission. I was impressed that she avoided artificial effects such as tempo-goosing, but instead concentrated on the music as a whole within a traditional time frame. Her care at constructing a wide dynamic range within a controlled but fluid rhythmic scheme made a big difference in my enjoyment — not to mention her not playing the repeat of the first movement’s exposition, which prevents burdening listeners of Brahms’ supremely familiar music with a weighty knapsack of the Great Books.

The second movement particularly benefited with Mälkki’s expertise in dynamics and bringing out accents. Parts of the early middle section sounded just slightly ragged to me, but the return of the material was handled flawlessly. The woodwind section excelled in the third movement, smooth as a moistened clarinet reed. The finale was suitably brisk and well played by all concerned, leading to sustained cheers and a standing ovation.

That Mälkki is one of the few major female conductors should not be of concern, though the issue is often addressed in the press. Classical music is a long-term art. I feel Mälkki, like the introduction of the horseless carriage, is not a curiosity, but a continuation of an irreversible trend, and her example will be an inspiration for many, many to follow. Bring her back to San Francisco!