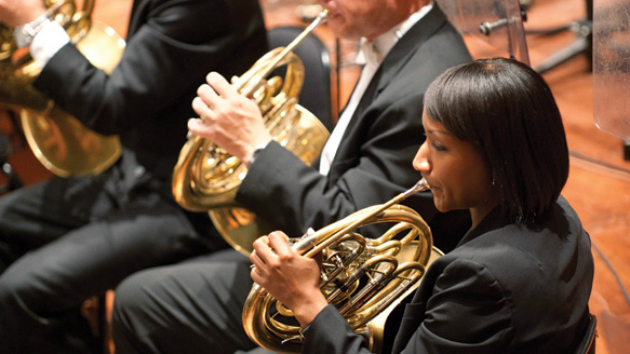 Samuel Carl Adams says he composed Radial Play in order to highlight the “youthful exuberance” of the National Youth Orchestra of the United States of America, which premiered the six-minute work in July 2014. Masterfully played by the San Francisco Symphony on Wednesday night, this exciting piece proved the perfect antidote to the lackluster performances that have recently come out of Davies Symphony Hall. Led by Michael Tilson Thomas, Adams’ piece set the stage for an invigorating evening of works by Mozart and Bartók.

In Radial Play, two harps establish a fundamental pulse, which is then shifted and distorted by the other sections of the orchestra. Although the entire piece centers on the pitch of F-sharp, Adams’ unexpected orchestral colors and sophisticated rhythms prevent it from feeling static. The 29-year-old will surpass his father.

Although the percussion section featured prominently, the flutes’ vibrancy stood out, and the strings provided a tight foundation. The orchestra was as bubbly as a youth group, maintaining control without sounding calculated.

Often, the violin — higher in range, and with more brilliance of sound — cannot help but outshine the viola in performances of Mozart’s Sinfonia Concertante, K. 364. Not so on Wednesday. If anything, principal violist Jonathan Vinocour stole the show from concertmaster Alexander Barantschik.

The pair was flawlessly synchronized, yet Vinocour imbued his playing with superior musicality even as he dutifully matched the bow strokes of his colleague. Of course, Barantschik is an extraordinarily accomplished performer. Yet, he tends to play diverse pieces of music in the same style, and on Wednesday his too-uniform sound obscured the striking mood shifts Mozart employs in much of his work.

In the first movement’s development section, Barantschik’s usual fast bow speed and vibrato sounded humdrum, and his 16th notes were too easy. His phrases in the Andante sounded rigidly compartmentalized next to Vinocour’s long, directional lines. In the cadenza, especially, Barantschik’s sound lacked intensity; although the pair’s air of resignation at the movement’s close was touching. Fortunately, the violinist matched Vinocour’s enthusiastic vigor in the final movement.

Throughout the first movement, the orchestra’s lively syncopations created a forceful rhythmic drive. However, the style was sometimes sedate; in particular, the sudden forte in the second measure was too temperate. The strings were appropriately melancholy in the slow movement, but the violins’ repeating eighth-note figures — played with undue accents on each downbeat — became too dirge-like. The horns excelled in every passage they played.

Although the opening of the Elegy was tentative, despite the basses’ hauntingly phrased line, the movement eventually developed a strong expressive direction. In particular, the violins’ anguished passages high on the G string were full of intensity I rarely hear from the Symphony. The fourth movement, “Interrupted Intermezzo,” was surprisingly and effectively boisterous. Although the ensemble was occasionally precarious in its perpetual motion-style opening and fugal section, the finale was delightfully raucous.

The oboes and piccolo — played by Catherine Payne — phrased with integrity. Above all, the brass players were outstanding: Their second movement chorale never wavered in conviction, and their sheer volume in the finale was staggering.

Masterpieces, more than second-rate works, tend to yield good performances. But the S.F. Symphony’s nuanced interpretative approach to Bartók elevated this performance to a fine level. If the Symphony brings back any of its recently played works next season, I hope it chooses Bartók over Bernstein.