Why the delay? For starters, stiff competition in the genre. Pragmatic Hindemith wrote solo works for nearly every orchestral instrument, and for cases like the double-bass and tuba, gifted with little great repertoire, these contributions are especially significant. That doesn’t hold for the violin. Even by conservative standards, upward of a dozen great violin concertos were written before Hindemith’s time — and many more, including popular works by Prokofiev and Barber, were published concurrently.

It’s interesting and tuneful music, but Hindemith’s concerto isn’t an automatic showstopper. From a technical point of view, it’s not particularly brilliant (though many chromatic passages are thorny), and emotionally, the piece isn’t quite as stirring as those giant works by Alban Berg and Béla Bartók. It’s a gem, but a little one that sometimes feels less like a grand concertante work than it does chamber music. 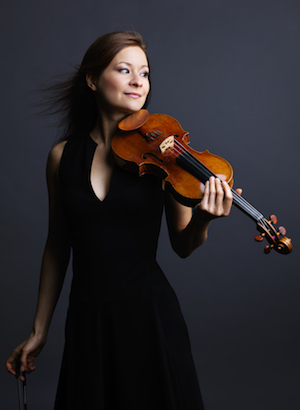 Moments of intimacy, in fact, were among the highlights of Friday’s performance. In brief but memorable passages — the wind solos in the first movement, and the accompanying strings’ sustained lines in the second — Steinbacher seemed to enjoy a good rapport with each member of the orchestra. Her sweetness of sound and long phrasings, peppered with tasteful portato emphases of particularly special notes, were most effective.

But it was also in the second movement that some orchestral problems became apparent — ones that, paired with a restless audience that must have collectively received at least a dozen texts and calls, deprived the performance of any real spark.

The opening statements were delightfully capricious, but from the vantage point of the front orchestra section, the balance was often wildly off. In the grand tutti, the brass so completely drowned out the strings that the winds’ ascending scales were seemingly met with no response. No matter how cleanly individuals may have played in later passages, the effect was muddled when only the outlines were defined. Subsequently, several phrases felt like passagework, episodes to endure while in transit to the next, beautiful melody.

If unorthodox prioritizations misfired in the Hindemith, however, they paid off in a uniquely characterized performance of Brahms’s Fourth Symphony. A good guest conductor draws new ideas out of an established group, and that’s just what Janowski did. Some choices were as simple as unusual-yet-satisfying prominences: of the accompanying strings’ staccato eighth notes in the first movement’s wind and brass melodies, for example, and of the triangle, throughout the third movement.

Other surprises impacted the performance’s direction on a larger scale. In the slow movement, it was jarring, initially, to hear the violins’ first bowed melody played with so much more rhythmic motion than is traditional. In hindsight, it’s the hallmark recordings, which almost uniformly seem to divide the measures of six into half-measures of three, that have it wrong. By imbuing this early melody with energy, Janowski anticipated the later reward of a related melody, slower in note values, which felt truly luxurious.

In the finale’s opening statements of the theme, Janowski’s tempo was again quite brisk, which set the stage for delicious spreading later in the movement, as well as some rather impressionistic, offbeat triplets. In fact, surprising rhythmic expression extended into the placement of pickup notes in the brass-bassoon chorale, simple music whose very purity renders it difficult to execute. But the movement is marked energico e passionato, and Friday’s performance hit both marks.