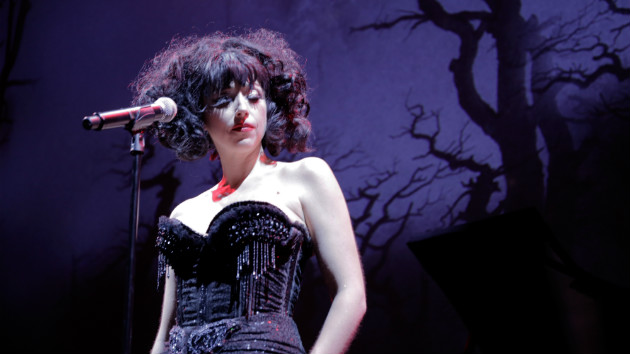 “Willkommen, bienvenue, welcome” to SoundBox’s second season, which opened on Friday, Dec. 11, with a program inspired by Weimar cabaret. Combining prurient, provocative, and irreverent social commentary with sheer entertainment value, cabaret tested the flexibility of the transformed Zellerbach rehearsal space, but the curating partnership between the S.F. Symphony’s Director of Summer Concerts Edwin Outwater and singer/performance artist Meow Meow rose to the occasion with a well-designed concert.

The program had begun with a somewhat bewildering choice — back-to-back performances of Schubert’s Die Forelle, with its attendant instrumental quintet, also serving as an elaborate and appropriately campy introduction for Meow Meow as the night’s MC.

The connection between Schubert’s salons and the interwar cabaret scene is an interesting one. Unfortunately, the more ambiguously allegorical (or voyeuristic) elements of C.F.D. Schubart’s lyrics were lost due to improperly-timed supertitles.

Fortunately the following selection, an eerie arrangement of Weill/Brecht’s “Ballad of the Drowned Girl” by Australian composer Iain Grandage (a frequent collaborator of Meow Meow’s), cemented the singer’s position as the star of the evening, as she engaged in a disturbing duet with her own doppelgänger, sinking underwater on one of the venue’s projection screens.

Meow Meow continued to shine on two additional (and more idiomatic) Grandage arrangements of Weill favorites (“Surabaya Johnny” and “Pirate Jenny”), before triumphing in the novel Sonata Erotica by Czech composer Erwin Schulhoff, who was an early musical victim of the Nazi regime.

Despite the proclivity of totalitarian regimes to label all potentially seditious art as “degenerate,” Schulhoff’s might have been one of few pieces to actually deserve the label, as it unfolds as a carefully-notated, simulated orgasm. In appropriately Brechtian fashion, Meow Meow broke the fourth wall by inviting one audience member to serve as her microphone stand (audibly admonishing him not to be limp, for added measure), and then by unravelling a comically long score as she moved from the main stage to another while pursuing her climax. The audience, much as Schulhoff’s audiences from nearly a century ago, roared with delight. 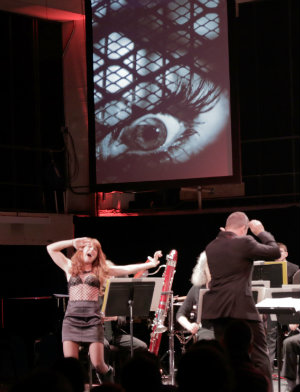 Two of the program’s more “serious” selections — Paul Hindemith’s Kammermusik No.1 and Ligeti’s Mysteries of the Macabre — ran the risk of appearing too formalized and perhaps even too long compared to the bite-size accessibility of the rest of the night. Fortunately both were performed with humor and verve, actually highlighting the similarities between the “higher” artworks and their smokier counterparts, such as in the sultry flute melodies in the Hindemith’s finale.

The surrealist, dystopian atmosphere of Ligeti’s concert suite was rendered convincingly by soprano Nikki Enfield, whose presence gradually shifted from commanding to paranoid, until the spectacular and utter breakdown that ushered the end of the piece. The audience seemed to appreciate Enfield’s performance just as much as her predecessor, suggesting that even “difficult” music can successfully reach a properly primed public.

Another postmodern reimagination of cabaret, Grandage’s arrangement of Laurie Anderson’s The Dream Before (for Walter Benjamin) provided the perfect close for the program. Meow Meow sang of Hansel and Gretel’s adult, dysfunctional relationship, her voice soaring over muted orchestral accompaniment and a particularly Anderson-esque cloud of reverb.

The evening was over; the night had just begun.