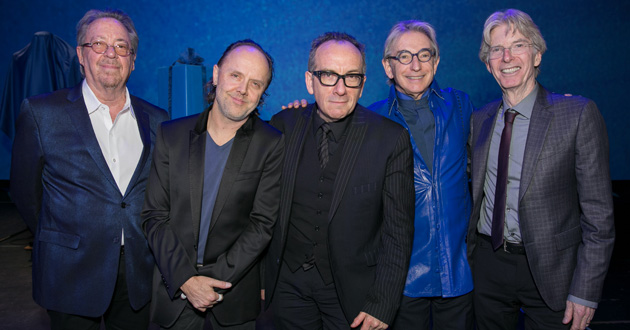 In a birthday bash that had no toasts or testimonials and a menu that might have been planned by a giddy child grabbing treats out of the cupboards, celebrants of San Francisco Symphony Music Director Michael Tilson Thomas’ 70th found their pleasures where they liked. And if they didn’t care for one thing on Thursday night at Davies Hall, something else came along shortly.

As the guest-of-honor joked in his opening remarks, notoriously long-winded gala concerts need to keep moving. Otherwise, MTT drily noted, family members who hadn’t attended might not recognize you by the time you got home. Among the many gifts he has showered on this orchestra over his 20 years as music director, Tilson Thomas’ wit and sense of humor, both personally and musically, were on full display in front of a sold-out house. He was in jocular spirits all night. No navel-gazing about aging or mortality allowed.

This gala, in turn, kept stepping along, from Bizet (Farandole from, L’Arlésienne, Suite No. 2) to Shostakovich (the third movement from Piano Concerto No. 2), Schubert (a two-handed piano Marche caractéristique) to Bernstein (the Candide Overture). With one exception, the pieces clocked in under 10 minutes each. Curtain calls were kept to a minimum. 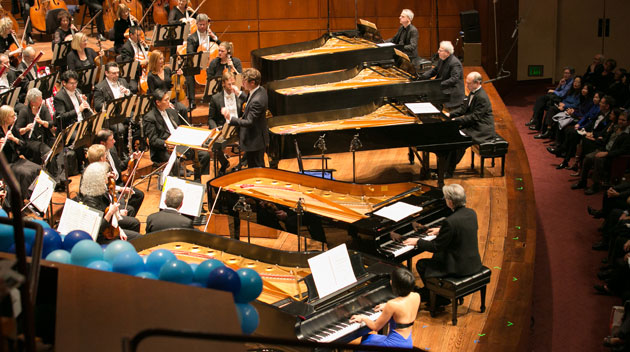 The result was a party that felt both grand, with a big-ticket dinner beforehand and an all-star team of five pianists, and cheerfully improvised. The pianists all carried their scores onstage, suggesting there hadn’t been much prep time for their concerto excerpts and other short selections they played. MTT himself filled in as a page turner at one point and proved, charmingly enough, to be less than expert at the task. There was an unscheduled, slightly chaotic two-piano four-hand gallop through the William Tell Overture. “Hi-Yo, Silver! Away!”

In case there was any doubt in advance, this was not a night for discerning musical judgments Sure, some stuff sounded great. Soloist Marc-André Hamelin hit an early sweet spot with his brightly exultant Shostakovich turn. A trio of dances from Tchaikovsky’s Swan Lake showcased principal trumpet Mark Inouye’s liquidly precise tone and concertmaster Alexander Barantschik’s nimble and soulful mastery. MTT pulled out all the stops in the Mazurka, delighting in the freedom to let the music barrel out in a way no ballet pit orchestra serving the dancers would. The evening’s sum effect was less like an all-star tribute and more like a salon for a bunch of friends who love to make music together. There just happened to be 2,700 of us on hand to listen in.

But the evening’s sum effect was less like an all-star tribute and more like a salon for a bunch of friends who love to make music together. There just happened to be 2,700 of us on hand to listen in. One thing happened — Yuja Wang’s feathers-and-steel account of the showpiece Scherzo from Henry Litolff’s Concerto symphonique No. 4 — and then got swept away by some other flashy sensation. The pianists grinned and gaped at each other in the two- and four-handed selections.

The single biggest musical slice of the evening arrived after intermission, when MTT joined keyboardists Emanuel Ax, Jeremy Denk, Marc-André Hamelin, Jean-Yves Thibaudet, and Yuja Wang in Hexameron, a six-piano-and-orchestra layer cake conceived by Franz Liszt, et al. Never performed at the time, this reconstructed set of variations on a march theme by Bellini comes off as a sort of 19th-century reality show duel. MTT “played” Liszt. Thibaudet was his rival Sigismond Thalberg. Ax, as Chopin, brought a measure of heartache and fury to the task. Call it Piano Playing with the Stars.

By turns blustering and delicate, amusing (a figure passed like a baton from piano to piano across the stage) and pompous, Hexameron was an ingratiating curiosity. It was also a signature of MTT’s own endlessly intrepid career. Forty-four years ago, when he was a wunderkind conductor in his 20s, Tilson Thomas led the first full performance of the piece (in Robert Linn’s reconstruction) with the Boston Symphony Orchestra.

Teased in advance, the evening’s “surprise guests” included rockers Elvis Costello, Boz Scaggs, Phil Lesh, and others, who blasted out an amplified birthday greeting just before intermission. Beach Blanket Babylon cast members came on later in full, silly costume to lead an audience sing-along of “Happy Birthday.” By that time the guest of honor, who had changed into a flashy blue stain jacket with his initials on the back, was taking it easy in a director’s chair.

But just as it seemed he might be basking in the privileges of seniority, a wonderful thing happened. The orchestra broke into the Candide Overture without him lifting a finger to conduct. The orchestra played on, expertly, with MTT as a spectator. It was both a visual joke — about the conductor’s role in music making — and a tender affirmation of the great orchestra he’s shaped and molded over the decades.

There he was, drinking it all in. And in a piece by Leonard Bernstein, no less, a mentor and kind of spiritual father figure in MTT’s long musical life. It was the most touching and moving moment of the night, a wistful linking of past to present to future. A party that began with a montage of Tilson Thomas photographs morphing from early childhood to full maturity ended with this tender, open-ended farewell.

Yes it was a night about MTT, complete with proclamations from President Obama, Governor Brown, and Mayor Lee in the program. But it was finally, and more importantly, a night about music’s ageless presence and power.