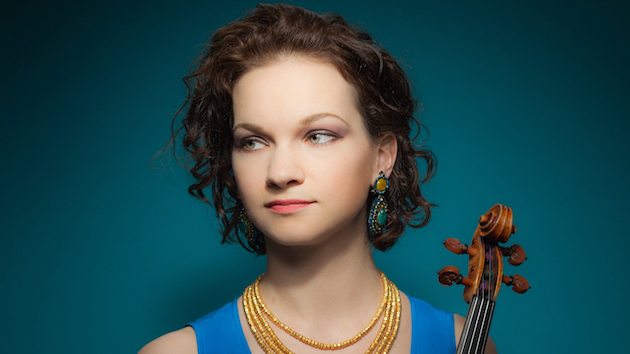 Nearly 20 years ago, a teenaged Hilary Hahn made her recording debut playing three of Bach’s solo works for violin. Listening to the recording with the benefit of hindsight, the beginnings of a concert artist are indeed apparent: by all technical accounts, it’s an immaculate execution.

But the interpretation is so by-the-book that the recording is hardly worth buying. And how could it be otherwise? New artists with strong points of view, especially in works as formidable as the Bach solo sonatas and partitas, risk polarizing listeners. At the time of its recording, after all, Hahn was still a student, playing Bach in the clean, romantic-leaning yet mild-mannered style many people are still taught.

Thus the time seems ripe for a mid-career re-examination of these formative pieces. And for her April 26 recital at Davies Symphony Hall, which included sonatas by Copland and Mozart, as well as a premiere of a Bach-inspired work by Antón García Abril, Hahn revisited Bach’s Sonata No. 3 in C Major. But if Tuesday’s performance is any indication, Hahn the mature artist has little to append to her initial interpretation of Bach’s work.

Everything was, in a sense, perfect: intonation faultless, tone pure, vibrato controlled. Hahn duly emphasized the melodic lines in the polyphonic passages, sustaining — no matter how difficult — each double-stop for its full duration.

But there was no complementary lightness or movement: there was very little contrast at all. The introspection with which Hahn played the opening Adagio was effective, yet the same approach transformed the subsequent Largo — painstakingly subdivided into eight — into a dirge. Hahn’s smoothly connected double- and triple-stops, though technically impressive, began to feel wearing in the massive fugue — a movement that’s significantly longer than the others. On Tuesday, it felt very long, indeed.

So it was that in performance, Heart — the first in a series of six solo partitas written for Hahn by Antón García Abril — outshone the work whose tradition ostensibly inspired it. Born in 1933, Abril is an accomplished composer who, outside of Spain, is known primarily for his many film and television soundtracks. But Heart, though tonally indebted, isn’t unchallenging. Like the 20th-century solo sonata composers before him — Ysaÿe, Bartók, Reger — Abril writes idiomatically for violin, adopting traditional styles of implied polyphony, arpeggiation, and bariolage. But he imbues these familiar techniques with novel harmonies and an underlying dynamism that made for an exciting performance by Hahn.

Pianist Cory Smythe was a welcome addition in sonatas by Copland and Mozart. Written during the height of World War II, the Copland’s Violin Sonata inhabits such range of expression — alternately contemplative and exuberant, lyrical and active — that the critic Virgil Thomson called it “one of its author’s most satisfying pieces.” Yet without the counterbalance of Smythe’s relaxed melodic pacing, Hahn’s fervent vibrato and piercing tone — though appropriate later in the work — would have obliterated the uniquely peaceful quality of the first movement.

Engaging in rhythmic play, both musicians heightened the drama of the stormy Allegro of Mozart’s Violin Sonata in G Major, K. 379. However, in the second movement’s variations, it was again Smythe who shone as an artist (if not as a perfect technician): leading the first and fifth variations, he combined elegance with a refreshing whimsicality.

The program’s finale was Tina Davidson’s Blue Curve of the Earth, written in 2011 for Hahn’s In 27 Pieces album of contemporary encores. The piece’s opening is compellingly energetic, with grooving percussive lines shared between the violin and piano. But subsequent lyrical passages could use an injection of the charm characteristic of traditional encores. As written, the piece would have been better placed earlier in the program.