As the economic crisis imperils arts organizations large and small, it was wonderful to see a near-capacity crowd fill Davies Symphony Hall on Saturday evening for the San Francisco Symphony's performance of works by Tilson Thomas, Prokofiev, and Shostakovich, featuring pianist Garrick Ohlsson as soloist and conducted by Michael Tilson Thomas. The audience's affection for the conductor and his band was obvious throughout the evening, and I was happy to be reminded of the special bond that exists between this city, the orchestra, and the conductor.
I was reminded, too, that this bond is not simply fortuitous; it is, among other things, the result of hard work by the Symphony's forward-thinking administration, which continues to develop excellent audience outreach programs, including the recently established "Off the Podium," a series of informal post-concert discussions between conductor, audience, and guest artists.

Saturday's concert opened with the conductor's own Street Song, a three-movement work for symphonic brass. MTT composed this work for the Empire Brass Quintet in 1988, later expanding it for full orchestral brass section (plus flugelhorn) for the London Symphony Orchestra brass in 1996. In recent years, Tilson Thomas has increasingly programmed his own works at Davies: Since 1999, the Symphony has performed at least six of his works, including sets of orchestral songs to texts of Whitman and Dickinson and the contrabassoon concerto Urban Legend.
Americana, With a Dash of Stravinsky
Like many of these works, Street Song is steeped in musical influences of Tilson Thomas' youth. Although the composer's program note emphasizes Street Song's musical ecumenicism — the harmonies of the first movement alone, he writes, "move between the world of the middle ages and the present, between East and West, always ... from the perspective of twentieth-century America" — the piece is overwhelmingly set in an Americanist idiom, familiar from MTT's Dickinson songs.

Listeners will immediately identify this language with Copland, who has played a central role in the composer's musical autobiography. The penultimate section of Street Song's third movement is strongly evocative of the Charleston-like closing section of Stravinsky's Octet (Tilson Thomas knew the composer as a youth in Los Angeles). Street Song, to my mind, isn't particularly interesting music; still, it offered a welcome opportunity to enjoy the Symphony's stellar brass section. 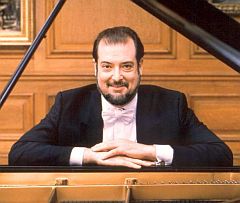 The concert continued with Prokofiev's Fifth Piano Concerto (in G, Op. 55), with Garrick Ohlsson as soloist. Perhaps the least well-known of his five piano concertos, the Fifth was written in France in 1932, and premiered later that year by the composer with the Berlin Philharmonic under Furtwängler. The piece is cast in an unconventional five-movement form. Only the fourth-movement Larghetto is slow; the remaining movements are quick, motoric, and frequently punctuated with the sardonic wit characteristic of Prokofiev's early, modernist style.

Ohlsson was splendid, his performance sparkling and precise. There was the perfect alloy of artistic flair and disciplined restraint demanded by the score. Throughout the concerto, though, the orchestra's sound was disappointingly hollow. This wasn't simply a question of the orchestra playing more softly to accommodate the soloist; even in forte passages for the orchestra alone, the ensemble's sound (particularly that of the string section) was lifeless, empty, and without any resonant core.

This is a problem I have noticed with this orchestra on more than one occasion. I don't know the cause, although the hall's acoustic might play a role; Tilson Thomas' sound concept and conducting style might be part of the equation, too. In this instance, I suspect that the ensemble's musicians weren't as familiar with the score as they might like, and that lack of familiarity was behind the orchestra's thin sound.
The MTT Effect, Illustrated
Whatever troubled the Prokofiev, though, disappeared during the concert's closing work, Tchaikovsky's Fifth Symphony. Tilson Thomas' idiosyncratic reading highlighted what he does best as a conductor, which is to cast familiar works in a new light, prompting listeners to think about canonical composers — and, indeed, inherited narratives of music history — in new ways. He delights in bringing out gestures and stylistic influences suppressed in more conventional performances. Scores under his command come alive with a chattering multitude of voices, including historical influences important to the composer yet often overlooked.

Tilson Thomas achieves this largely through attention to detail. Throughout the Tchaikovsky symphony, he luxuriated in little-heard countermelodies and accompanimental figures buried deep within the score. Every phrase was painstakingly articulated; it was clear that every note's attack had been thought about and rehearsed. The tempos throughout the Tchaikovsky were purposefully elastic, each phrase slightly expanding or contracting as the conductor saw fit. The elasticity brought lifelike breath to the score.

It's an approach that has its dangers. In the second and, especially, fourth movements, Tilson Thomas seemed so immersed in the approach to and descent from the movements' climaxes that the climactic moments themselves were understated. It felt as though the orchestra found itself standing on the precipice of an emotional breakthrough, but was pulled back from the edge as the next interesting gesture came along. Perhaps this, too, was purposeful, part of MTT's vision for the piece; if so, it didn't quite convince me.

As always, the ensemble's solo musicians were wonderful. Principal horn Robert Ward's solo in the second movement was beautiful. The star performance, though, was by principal clarinetist Carey Bell, whose opening solo was breathtaking and who was stellar throughout.

The San Francisco Symphony will repeat this program, along with last week's, on a West Coast tour later this month. The tour begins in Seattle, followed by several performances throughout California, and concludes with two performances in Los Angeles' Walt Disney Hall.