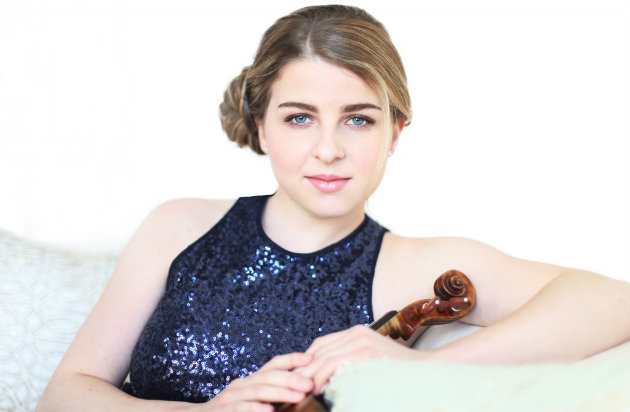 Could Mei-Ann Chen be a candidate to replace Bruno Ferrandis at the helm of the Santa Rosa Symphony when his contract expires at the end of the 2017-18 season? If so, she would be a strong contender. Her impressive guest conducting at the orchestra’s Jan. 10 concert at Weill Hall in Sonoma State’s Green Center was overshadowed, however, by a staggering performance from the young violinist Caroline Goulding, who played the Tchaikovsky Violin Concerto to perfection.

Goulding is the most impressive violin soloist this reviewer has heard since Hilary Hahn burst on the scene more than 20 years ago. Goulding’s technique is impeccable, her intonation superb, her bow arm a wonder, and her fingers anatomical marvels. Her musicianship, however, is what sets her apart from her many technically gifted colleagues.

Barely into her 20s, Goulding plays like a seasoned musician, alert to all the subtle nuances and possibilities of the music. No matter how many fully articulated notes fly off her violin, the important ones always come to the fore. The phrase always takes precedence, and the sound is consistently gorgeous.

With her mop of curly blond hair and a red dress, Goulding looked like a pillar of fire capable of igniting anything she played. The only blemish to her otherwise radiant appearance was a music stand with a score. One can only guess how much more engaging her performance would have been without that memory aid. (To be fair, Goulding is performing violin concertos by Beethoven, Bach, Mozart, Mendelssohn, Sibelius, Glazunov, Paganini, Prokofiev, Bruch, and Ligeti during her jam-packed 2015-16 season, to say nothing of multiple recitals and other performances.) [Goulding] was in constant motion, crouching forward during the virtuosic passages and swaying from side to side during the emotive ones. Her tone was exquisite, even in the highest registers and the many harmonics called for in the score.

In the Tchaikovsky, Goulding displayed an elegant, room-filling sound from the outset, easily bringing the softest passages to the remotest corners of Weill Hall. Her body was in constant motion, crouching forward during the virtuosic passages and swaying from side to side during the emotive ones. Her tone was exquisite, even in the highest registers and the many harmonics called for in the score.

Meanwhile, Chen had the orchestral dynamics firmly in control. The orchestra never once overpowered Goulding, and their playing in the softer passages was well below pianissimo. Both Chen and Goulding took their time, letting phrases linger before transitioning to the next. Goulding’s cadenza in the first movement was stupendous, as complete a musical experience as one could wish for.

Goulding, Chen, and the orchestra sustained the same high level of musicianship throughout the concerto. The fireworks of the first movement gave way to the delicacy and luxuriance of the second and then the awe-inspiring dances of the third. The standing ovation at the end was sustained but sadly produced no encore. Nonetheless, we’re sure to hear from Goulding again.

Earlier, Chen set the mood for the afternoon with an invigorating performance of contemporary Chinese composer An-Lun Huang’s Saibei Dance. The melodies, inspired by Chinese folk songs, were sprightly, and the orchestration was inventive; but it was all over in four minutes, barely enough for a taste.

The second half offered a better opportunity to observe Chen’s conducting skill, with a performance of Dvorak’s Symphony No. 8. Chen led with economical movements and an easy-to-follow beat. The musicians appeared to be well-rehearsed, with good unison playing from the strings and excellent balance between the orchestral sections.

The performance of the first movement was energetic, but the full sound of the orchestra didn’t emerge until the second, where sharply delineated phrases and assured pace led to full resonance and shimmering beauty. The graceful waltzes of the third movement were taken a bit too slowly, but individual sections were often serene.

All the stops came out in the finale, which the trumpets announced with a stirring fanfare. The low strings maintained that energy, and the atmosphere became supercharged when the full orchestra joined in, with standout playing by principal flutist Kathleen Lane Reynolds. Although not as magical as the Tchaikovsky performance, Chen got everything she wanted out of the players, and then some.