Another huge feather — Cyrano's famed plume, even — in Berkeley Opera's tiny cap, the double-bill of Béla Bartók's 1918 A Kékszakállú Herceg Vára (Bluebeard's Castle) and Maurice Ravel's 1925 L'Enfant et les sortilèges (The child and the magic spells) opened Saturday night at the Julia Morgan Theatre with a fabulous production and some kind of prestidigitation.
Jonathan Khuner's orchestra was seated behind a screen upstage, so the musicians remained invisible throughout the evening. Their names were the usual suspects, the Bay Area musicians who play all over the place, fatigued, overworked, and underpaid, heroic members of the Freeway Philharmonic.

But listening to the orchestra's rock-solid, red-hot, intense, mighty rendition of the Bartók, and then its elegant, effortless performance of the wickedly intricate Ravel, you might well have suspected sleight-of-hand. It couldn't be a pickup band, so a major opera company's orchestra must have been smuggled in there, to the well-hidden place. Does anybody know where members of the Met Orchestra were between 8 and 11 last night? Who were the masked men and women producing this breathtaking performance of Bartók's concentrated, towering score, which alternates between riveting development, driving rhythms, and achingly beautiful melodies?
Orchestra Musicians to the Fore
Let's play along with Maestro Khuner and give credit to the listed concertmaster Anthony Blea for those terse solos in Bluebeard, to alleged principals Zehra Sak-Brody (second violins), Michelle Dulak Thomson (viola), Nancy Bien Souza (cello), Jane Lenoir (flute), Max Hollander (oboe), Jessica Boelter (English horn), Karen Wells (clarinet), Peter Josheff (bass clarinet), Wendell Hanna (bassoon), and the entire brass section of seven, who sounded like multiples of their number, but — thanks to Khuner's superb direction — never too loud or out of balance.

Bluebeard, an overwhelming, claustrophobic probing of the secretive human heart and love's destructive drive to unlock it, and L'Enfant, an intricate, fantastic scherzo depicting a child's imagination, are as different as any two works of the same genre can be. And yet, watching the Berkeley Opera production, some powerfully similar traits emerged.

Consider their age; both received their premieres within a decade of each other (Bluebeard in May 1918, and L’enfant in March 1925), but they sound contemporary, "modern," still challenging, although now — unlike at the time of their creation — accessible to our ears. Both are present in the world of opera rather peripherally. For many in the audience in the delightfully full Julia Morgan Theatre, this was probably the first time seeing, or even hearing, the two works (although Berkeley Opera has produced Bluebeard before). And both are unique, with a musical language all their own. Bluebeard might be called the most powerful opera Shostakovich never wrote, but in fact, its music is unlike anything else. To a certain extent, that’s also true of Ravel’s work.
A Bluebeard Too Good-Looking
Paul Murray sang Bluebeard securely and well (albeit mistaking the fourth door for the seventh in the Hungarian libretto). He had good diction and overcame two difficult handicaps. First, he is a baritone coping with a role ideal for the rare bass who can produce beautiful high notes. And second, Murray is young, so it’s hard for him to be believable as an old, tired, defeated, but still larger than life figure. He would be more appropriate as Posa than Phillip II (in Verdi’s Don Carlo), Bluebeard's closest dramatic relative. Without the weight of many years and tragedies, the antihero of Bluebeard is hard, perhaps impossible, to understand. Bluebeard's initial reaction to the absurd arrival of a young woman in the dark, moribund castle is comparable to "Ella giammai m’amò," Phillip's resignation to loss and death. And yet, excessively handsome and too readily romantic as he was, Murray excelled in the music.

Kathleen Moss' Judith was both impressive and frustrating. With a great voice and projection, and a dramatic ability seldom seen on the opera stage, Moss could have — should have — given us an exemplary performance. The frustrating Achilles heel of her performance was unacceptably poor diction. You don't need to be Hungarian to have been struck by the innumerable closed rather than open vowels in Moss' singing. Bartók fused language and music so thoroughly that a problem with one strongly impacts the other. Fortunately, this is a correctable problem, and Moss may yet become a diva in the role, since she already has the needed attributes.

Naomie Kremer's mostly abstract visuals served Bluebeard well. I was grateful that she didn't go for the super-busy approach that the artist Ariel used in L'Enfant. All that puppetry, computer animation, and what-not in the Ravel was great fun, but competing for attention with Bartók's music would have been a serious misstep. Credit for doing the right thing at the right time goes to Khuner again, the man in charge, the artistic and musical director (who at one point even sang the part of a tardy instrument). 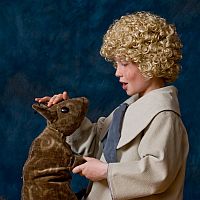 All photos by Eliot Khuner

Orchestra and vocal ensemble sparkled in L'Enfant, supporting 10-year-old Patrick Dowd, whose amplified Boy ranged from impressive to flawless. Singing the role of Fire, Nightingale and, especially, the Princess, Ann Moss produced a wonderfully pure, affecting sound. Raina Simons was a powerful Shepherdess and Bergère, doing equally well as Owl and Bat. Vanessa Langer was White Cat and the important Squirrel. Paula Chacon served as the voice of Mama, Chinese Cup, Dragonfly, and Shepherd. Lining up the soloists on either side of the audience, near the edge of the stage, was an iffy proposition, but it did work and, besides, the other possibility, behind the screen, was already occupied by the magical orchestra of probably disguised identity.