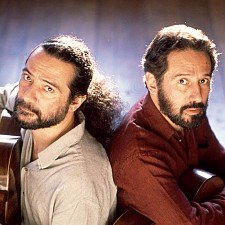 Sergio and Odair Assad have moved audiences and inspired guitarists around the world for over 30 years with revelatory performances of Latin American music and European classics, original compositions, deep musicality, and supple, almost telepathic, guitar duo performances. In the late 1990’s they began to expand their ensemble sound in a series of collaborations with musicians like Dawn Upshaw, Gidon Kremer, Nadja Salerno-Sonnenberg, and Yo-Yo Ma. Recently, they expanded their repertoire by exploring their ancestral roots in Lebanon.

On Sunday at the Palace of Fine Arts SFJAZZ presented Sergio and Odair Assad, Sergio’s daughter the pianist/singer/composer Clarice Assad, percussionist Keita Ogawa, and Lebanese singer Christiane Karam in a program titled De Volta As Raizes (Back to Our Roots) which was musically thrilling, emotionally satisfying and, at least implicitly, a politically challenging and sympathetic view of immigration.

Sergio and Odair’s grandfather immigrated to Brazil from Lebanon in 1895 and, as so often happens, the family connection to ancestral roots was lost in the process of migration and assimilation. The Assad’s were raised on Western music, from Brazilian chôros to European classics, but recently became interested in exploring connections that can be found between Latin American and Arab musical traditions.

The first half of the program was dedicated to music of Latin America and began with Sergio and Odair playing Piazzolla’s Bandoneon. They opened with ethereal sonorities that took full advantage of the immense palate of colors available to a guitar duo and later alternated between aggressive tango rhythms and more lyrical, tender passages. Ernesto Nazareth, a contemporary of Scott Joplin, wrote music which combined the influences of Brazil, Europe, Africa, and America to create a distinctive and influential style. The duo played his Epônina, a flirtatious but tender waltz, and Batuque, a rhythmically complex and energetic Brazilian dance. Antonio Carlos Jobim is best known for his 1960’s hits The Girl From Ipanema and Corcovado but his later work is in many ways deeper and more subtle. Amparo is quiet and introspective and Stone Flower rhythmically driving. The Assad’s played with a rhythmic sensitivity to the essence of bossa nova as well as the changing moods of each piece. 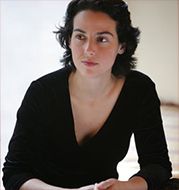 Clarice Assad came to the stage and sang Melodia Sentimental by Heitor Villa-Lobos to her brothers accompaniment and performed Cajuina by Caetano Veloso with percussionist Keita Ogawa. The Villa-Lobos, written in 1958 for soprano, male chorus and orchestra, was sung like a mournful Portuguese fado and the Veloso was presented with soulful intensity.

The first half concluded with a quartet of the Assad’s and Keita Ogawa performing two popular Brazilian pieces Baião de 5 by G. Levy and Mourão by César Guerra-Peixe. Ogawa is a wonderful percussionist whose usual role on Sunday was to offer the group colorful and sensitive support but he ended the program with a long, intricate, and polyrhythmic tambourine solo which delighted the audience and brought the first half of the program to a spectacular conclusion.

The second half was devoted to music with Arabic roots. It began with an outstanding performance of Sergio Assad’s Tahhiyya li Ossoulina, winner of the 2008 Latin Grammy Award for best contemporary composition, and dedicated to Lebanese and Syrian immigrants who settled in Brazil in the 1880s. Lebanese singer Christiane Karam joined the group in songs by popular Arabic composers of the 20th century, the Rahbani brothers and Abdel Halim Hafez el Masloub, as well as another song of her own composition.

The program ended with De Volta As Raizes (Back to Our Roots) a suite in four movements written by Sergio and Clarice Assad with lyrics by Christiane Karam. An ambitious portrayal of the immigrant experience in four movements titled Leaving, Hope, Nostalgia, and Happiness, it used every member of the ensemble and featured Sergio playing a traditional Lebanese string instrument. The music expressed everything the titles promised and created a powerful feeling of sympathy for the aspirations of immigrants.

The enthusiastic audience was rewarded with an encore of the tender Luiza by Antonio Carlos Jobim sung with lyrics in both Portuguese and Arabic.