You haven't lived fully until hearing opera in a small Italian town — the smaller the better. Forget the niceties of production values and flawless performances; instead, you can revel in the most essential component of the genre: passion.
The good news is that there is no need for long-distance travel. You get unbridled, sweeping, rousing operatic passion right in the heart of Silicon Valley. West Bay Opera, 52, the West Coast's second-oldest company (after San Francisco, 84), is presenting some new and young talent in two of opera's most heated potboilers. The Cav/Pag doubleheader — Mascagni's 1890 Cavalleria Rusticana and Leoncavallo's 1892 Pagliacci — seethes with love, betrayal, revenge, murder, and music to match.

In West Bay Opera's tiny Lucie Stern Theater, an overwhelming, manic performance paced an overall fine musical performance from a small, galant orchestra under General Director José Luis Moscovich's baton. The powerful star turn came from one of a half dozen singers making their debut: Gail Sullivan, in the role of Santuzza.

All photos by Otak Jump

Instead of portraying a woman hurt by her faithless lover (Vincent Chambers, making a promising, sweet-voiced debut as Turiddu), the soprano gripped the audience with an outsize vocal and dramatic presence of stunning intensity. No lost soul, this Santuzza is a veritable Electra, in search of vengeance from the get-go. So great is the intensity of Sullivan's vocal performance that instead of just sticking out of the ensemble, it lifts the entire production. (It was a relief to learn from the program notes that offstage Sullivan has a lighter side. With experience in European opera houses, she has written a guide for auditioning singers, titled Kein' Angst, Baby!, the Australian edition presumably called No Worries.) 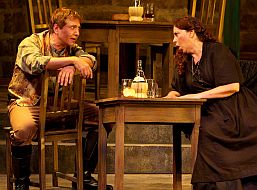 Vincent Chambers as Turiddu and Gail Sullivan as Santuzza

Sullivan and Sharon Maxwell alternate as Santuzza and Nedda in Pagliacci. At Sunday's performance, Maxwell's vocal performance built well to the climactic final scene, but dramatically, her awkward hand-waving made her look more authentic as the commedia dell'arte Colombina. Debuts in Pagliacci include David Hodgson as Tonio (singing a vital, robust Prologue) and the fresh-voiced Scott Six as Canio, singing up a storm. Cathleen Candia's Lola in Cavalleria is an impressively simple, effective performance. (The alternate cast Lola is Raeka Shehabi-Yaghmai, whom I haven't heard since her promising San Francisco Conservatory days; she too must be right for the role.) 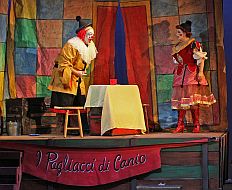 Scott Six as Pagliaccio and Sharon Maxwell as Colombina

Both operas are directed by José Maria Condemi and designed by Jean-Francois Revon, who overcame obvious budget problems with talent and imagination. The Cavalleria set is simple and functional, giving the feel of a Sicilian village; there is a "working model" of a big truck that serves as the platform for the Pagliacci show. Condemi is moving the chorus (which sounds better than in any previous WBO show I've heard) in intriguing, functional formations. The director's only misstep is the horizontal love scene in Pagliacci, more hilarious than amorous.