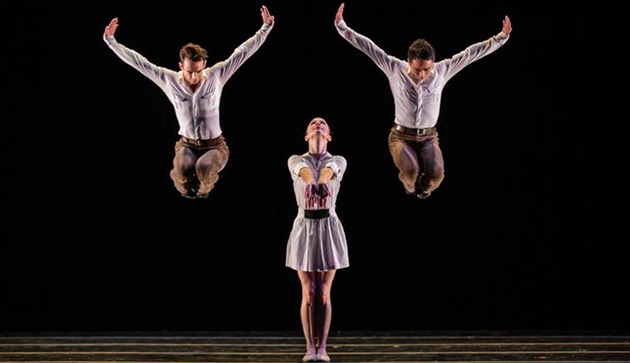 Smuin Ballet, which will pepper the Bay Area with several different shows this season and in the spring, opened Thursday night, September 24, at the Mountain View Center for the Performing Arts. It moves on to the Palace of Fine Arts Oct. 1-4, and should prove pleasing to seekers of a diversified range of dance experiences.

Artistic director Celia Fushille’s talented young dancers — 16 in all — come from all over the place but have the look of a seamless organization, and the contemporary choreographers they’re working with show, with varying degrees of success, explorations both physical and mental.

Company founder Michael Smuin, the former artistic director of the San Francisco Ballet, was himself no slouch at experimentation. But the lone example of his choreography, the 1981 Bouquet, a quartet and a pas de deux set to Shostakovich, looked, for all its well-crafted lyricism, rather conventional compared with its companions. Time, it seems, has moved on.

The opener, Ma Cong’s French Twist (2010), was both frisky and demanding. Created for four couples in black and white — cute short dresses for the ladies, not a pointe shoe in sight — it’s set to French movie music by Hugues Le Bars. Ma Cong, trained at the Beijing ballet, seems to take nothing seriously, including the sexy little gasps emanating from the soundtrack; nothing, that is, except acuity of partnering, accuracy of acrobatic lifts and slides, and the overall quality of the leaps and the ports de bras. It was a pleasure. 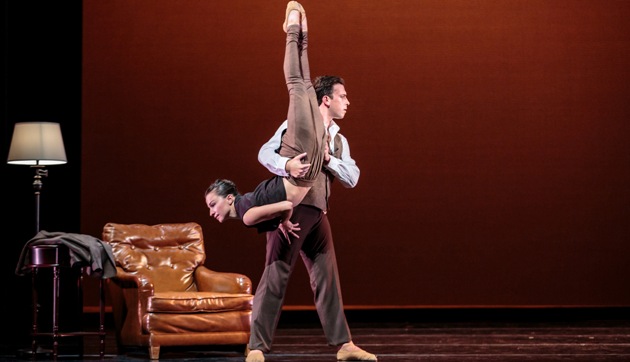 Dancer Ben Needham-Wood’s unlikely subject for a ballet, 20th-century psychologist Abraham Maslow, whose theme of “self-actualization” persists even though it’s known by different words today, took on an intriguing shape both materially and cerebrally. Maslow, a premiere this season, opens in what has to be a therapist’s office, complete with brown leather chair. Dancer Weston Krukow, seated there, finds himself disquieted by the delicate arm of a woman (Erica Felsch) — a spirit, a muse? — emerging from behind the chair to touch him on the shoulder. The choreographer seems determined to balance skepticism with a wish to believe, and it’s a twisty path to take in the brief time allotted.

The choreographer seems determined to balance skepticism with a wish to believe, and it’s a twisty path to take in the brief time allotted.  The original music, by Needham-Wood’s collaborator Ben Sollee, echoes the spirit of unease. In a clever touch that evokes Bournonville’s classic La Sylphide, the therapist dozes off in his chair.

Next scene: the heart of the matter, nimbly expressed by the cast of seven in jetés, close partnering, and innovative deployment, particularly the final ensemble sequence that lines up all the dancers, front to back. At the end, it appears that the psychologist and his spirit-muse switch places, and she becomes the reader and he the chair. Self-actualization is tricky, as is Needham-Wood — someone to watch out for. 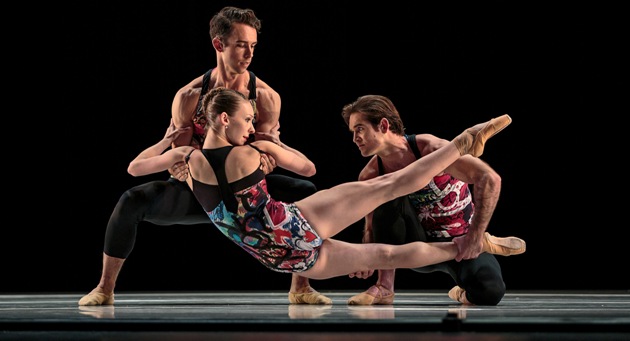 Broken Open, resident choreographer Amy Seiwert’s world premiere this season, is set to music by Julia Kent. The new piece is another indication of gifts no longer budding, but in full bloom. Seiwert excels at neoclassicism worth watching, and if you’ve watched a lot of it you know how rare that is. Her work, particularly here for the women dancers, gives full range to their capabilities, the generosity of their extensions — given eloquent display in the colorful leotards designed by Sandra Woodall — the precision of their pointe work. Its rises and falls of activity and tranquility are captivating. But this is a full-company work and the men are every bit as involved, interacting with the ballerinas and soldiering through demanding lifts to fine effect.

Seiwert discusses the process of creating this ballet in a program note, saying that the ballet “hid from me a little bit, but perhaps I was looking in the wrong direction. Finally, I shifted my perspective and met what this ballet wanted to be.” It’s the kind of disclosure that can only come from someone who knows that everything’s going to be more than just all right.