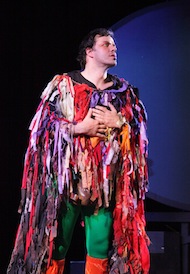 To give up a sparkling, 70-degree Bay Area afternoon for "YAF" (Yet Another Flute)? Enjoy a raccoon-packed production far more than some traditional Magic Flutes? Yes, yes, a thousand times yes, and kudos.

Mark Streshinsky's West Edge (née Berkeley) Opera has done it again, making up for a tiny budget with huge imagination and amazing excellence. David Scott Marley’s The Manga Flute, a new English adaptation in Japanese comic style, is bold, outlandish, delectable entertainment. Add a wonderful cast, with some major vocal/stage performances, and there is a must-see Flute in the El Cerrito Performing Arts Theater.

For generations, Mozart's music enchanted opera-goers, but Emanuel Schikanader's Masonic befuddlements have caused seborrheic head-scratching. Marley, who has done wonders modernizing Rossini and Lecocq librettos, took on the challenge with a gusto that on paper may look either silly or criminal. But it only appears gimmicky; however wild and crazy, the stuff works.

Marley's Tamino is a Tokyo investment banker shipwrecked on a magic, nameless island, which is split and devastated by the feud between the royal couple. That would be Sarastro and Queen Starfire, once married, but now doing a veritable prequel to the Michael Douglas-Kathleen Turner War of the Roses. (Go ahead and explain how Schikaneder's characters make more sense.) 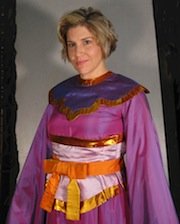 Among Marley's many "innovations," perhaps the best is his substitution of three young-soprano raccoons for the Three Boys, another puzzlement in the original. The raccoons don't just float in and out — they are essential parts of the story, playful and destructive one minute, wise and problem-solving the other, while also moving props around.

Streshinsky and West Edge once again uphold the most important principle in opera: static or "ultra-modern," traditional or fantastical, productions live or die depending on the their quality. By that measure, Marley's omnivorous nocturnal mammals blend in with Mozart brilliantly. Reason One: his singing libretto is a thing of wonder; whatever the new text may be, the English is mimicking the sound of the German original to perfection. Reason Two: the vocal-dramatic performances.

Outstanding local veterans Heidi Moss and Eugene Brancoveanu are giving their best-ever performances as Pamina (warm, personable, with thrilling but not self-aggrandizing vocalism) and Papageno. Of the scores of singers, some great ones, I have heard in the role none were more engrossing and entertaining than Brancoveanu. The voice is pouring forth big and effortless, the acting is free and natural — no clowning, just being funny and charming — and the man is in the zone.

Newcomers (at least to me) Darron James Flagg as Tamino and Elyse Nakajima as the Queen are sensational, Flagg carrying the role with ease, Nakajima hitting those lethal high notes gorgeously. Cliff Romig's towering Sarastro and Lori Schuman's sweet Papagena blend right in.

Jeremy Knight's video design of Megan Willis' Manga projected on panels is delightful, Caroline Altman's stage direction is simple and effective. Leah Slyder Vass' costumes work fine, but the wigs leave something to be desired, especially when it comes to Pamina's hair(?) — it may be authentic Manga or Goth, but ...

Jonathan Khuner is responsible for musical direction; he is to be credited for what is good, and should not be faulted for problems with individual instruments. Instead of an orchestra, this production features the "West Edge Wind Band" — 11 musicians working hard. Carol Adee, flute, and Daniel Alley, keyboard, made special contributions.