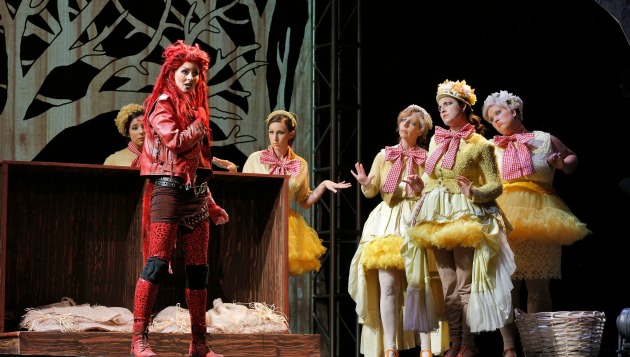 It was written nearly a hundred years ago, yet there’s still no other opera like it: Leoš Janáček’s The Cunning Little Vixen is the only work in the repertory based on a comic strip — about animals, no less. The music is playful and fast-paced, often lush but never treacly, and was, on July 30, the perfect way to kick off West Edge Opera’s 2016 festival season.

The Cunning Little Vixen concerns the adventures of an irreverent female fox who bites, steals, and eventually falls in love. But under its comedic surface, the opera — particularly in its final act — meditates on the serious theme of the passing of life. In fact, it was performed, by Janáček’s request, at his funeral. West Edge Opera’s opening night performance on Saturday at the abandoned Oakland 16th Street Station was musically riveting; however, bizarre costuming and lackluster staging distracted from, and nearly eclipsed, the opera’s profound emotional content.

Some of the opera’s sharpest material derives from animals behaving like humans: The Vixen engages in feminist consciousness-raising, but when she becomes pregnant, forest gossipers impel her and the fox t 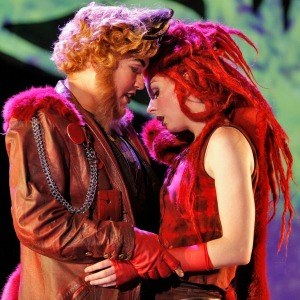 o rush to the altar. Productions often use costumes to play up this intermingling of animal and human traits, but West Edge’s animal costumes simply were in poor taste. Looking like rejects from the cast of Cats — all leather, studs, and unfortunate hair — the foxes were difficult to take seriously. And a baffling combination of a plaid bathrobe and aviator sunglasses detracted from mezzo-soprano Deborah Rosengaus’s charismatic performance as Lapák the Dog. Confused costuming had the worst effect on the hens: Wearing frilly petticoats, the Volti Chorus members — though vocally solid — couldn’t quite decide whether they were hens or humans, and flapped intermittently and haphazardly throughout the dragging second scene.

This wasn’t the only part of the opera that suffered from poor staging by director Patrick Diamond. Two key scenes — the forester’s capture of the vixen and her death — fell flat because of awkward movement around the small stage. And in the pantomime scenes, Liz Tenuto’s choreography seemed neither particularly informed by the music nor terribly meaningful. Other ensemble acting was vulgar but not really funny. 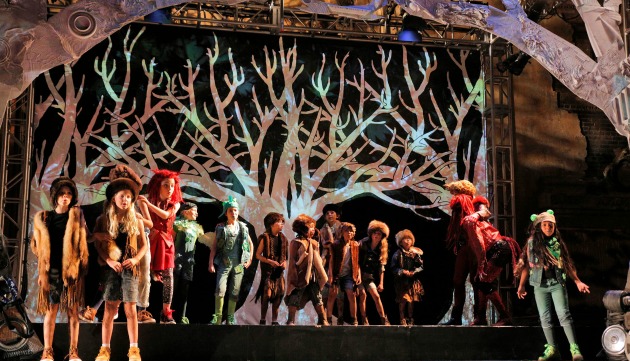 The set design was much better. Although the two massive trees flanking the stage — made out of junk — were a bit obvious, the projections (designed by Jeremy Knight) made the most of the small space. A brick wall and mounted deer head, superimposed on the forest backdrop, instantly transported the characters to an inn, and the use of digital spray paint, in particular, was creative.

The Vixen generally behaves badly, so it’s helpful when the singer portraying her is charismatic. Soprano Amy Foote certainly has a beautiful voice, and was, at times, charming. But she also seemed self-conscious in her acting, failing to fully inhabit the character — and thus, failing to draw much emotional response in the death scene. 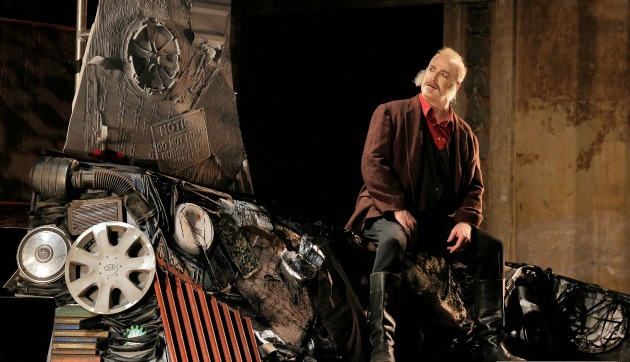 But if Foote didn’t especially stand out, it was only because other cast members were exceptional. Bass-baritone Philip Skinner was a powerful and agile Forester who, despite the messy ensemble choreography around him, delivered the final scene with contemplative grace — and was a delightful, not over-the-top drunk in the inn scene. Singing the Schoolmaster, tenor Joseph Raymond Meyers was a fine actor who made the least believable part of the story (who would mistake a sunflower for a woman?) utterly convincing. His pantomime strumming of his walking stick, a would-be serenade to Terynka, was a particularly charming touch. Sweetly expressive as the Parson, baritone Nikolas Nackley rounded out the men’s trio, which was the high point of the show.

Mezzo-soprano Nikola Printz gave a nuanced performance as Fox, and outstanding among the forest animals played by members of the Piedmont East Bay Children’s Choir were Kailamae Sands as Grasshopper and Margot Saulnier as Cricket.

Conducted by Music Director Jonathan Khuner, the chamber orchestra was strong particularly in the prelude to the first act, and, throughout the evening, imbued the episodic music with necessary movement. Leslie Chin’s flute and piccolo solos were a highlight.