Given the large number of fine recordings released in the past year, a first-time visitor to Planet Earth would hardly suspect that the record industry is in the doldrums. Nor will the music lovers on your holiday gift list think anything is amiss, if you present them with one or more of the sonic goodies in the guide that follows.

For well over a year, SFCV has been publishing reviews of CDs and DVDs. Most recordings that we’ve already covered, which run the gamut from core repertoire to the new and upcoming, would make swell holiday gifts. Rather than revisiting them, here are a few other significant recordings, some holiday-themed, that will definitely perk up your New Year. 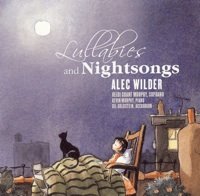 Listen to the Music Heidi Grant Murphy - Chinese Baby Song:
It’s hard to imagine a finer singer for this material than Murphy. The beauty of her pure, shining voice and the simplicity of her delivery caress Wilder’s music with infinite charm. Not only is this recording ideal for children, but the inner child in every one of us will also want to own it. Don’t miss this gentle gem. Britten’s Orchestra; Kansas City Symphony, Michael Stern (Reference Recordings RR-120) 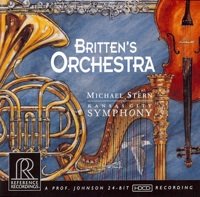 The latest release from the Bay Area–based, audiophile label Reference Recordings is one of the finer introductions available to Benjamin Britten’s orchestral works. If there’s anything that the composer’s famous Young Person’s Guide to the Orchestra demands, it’s a recording that faithfully conveys the various instruments’ unique timbres. Luckily, truthfulness is a hallmark of the award-winning recording engineer Keith O. Johnson. With sonics that top even Telarc’s highly praised effort from Paavo Järvi and the Cincinnati Symphony, Michael Stern and his far-better-than-expected Kansas City forces deliver a lovable performance filled with color.

Color also abounds in their Sinfonia de requiem and Four Sea Interludes & Passacaglia from Britten’s opera Peter Grimes. No, Stern doesn’t top the composer’s own performances (or a number of others). Yet the sound is so much better than the competition that you’ll surely savor this recording. 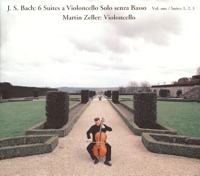 Great recordings of Bach’s cello masterpieces abound, beginning with Casals and continuing through the infinitely expressive artistry of Rostropovich and on to contemporary performers. Few recordings, however, capture the sound of an authentic Baroque cello with the clarity and captivating resonance of this high-resolution rendition by Martin Zeller. The playing of the principal cellist of the Kammerorchester Basel is gorgeous. He also understands how to dance, which is essential for someone playing suites composed of dances.

As fine as the CD release may sound, even better are the increased clarity and roundness of images on M.A. Recordings’ special-order high-resolution DVD-ROM. Playable on a computer’s hard drive, the recording achieves a high sample rate that brings the cello’s sound one step closer to the real thing. For the classical music lover who has embraced computer audio playback, which will likely vie with Blu-ray audio and video as the dominant forms of recorded music in the second decade of this century, Zeller’s gift will thrill. For everyone else, the CD version will bring smiles.

Martin Zeller - Bach Prelude from Suite No. 1 in G: 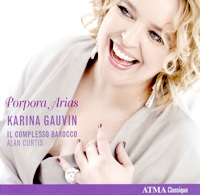 Canadian soprano Karina Gauvin, whose beautiful voice has graced a wide repertoire ranging from rare Baroque fare to Samuel Barber’s Knoxville: Summer of 1915, here devotes her impeccable technique to the rarely heard music of Neapolitan composer Nicola Porpora (1686-1768). The melodies are so beguiling, the showcase opportunities and coloratura challenges so great, that it’s hard to understand why six of the 11 arias on Gauvin’s CD are world premiere recordings.

What’s easy to understand is the beauty of her singing. Cecilia Bartoli’s equally beautiful, recently released Sacrificium (see review) shares with Gauvin’s CD a recording of Porpora’s “Nobil onda” (Noble spring) from his opera Adelaide. The singing is as different as the English translations: Gauvin’s being sweet and lovely, Bartoli’s sensationally fast and furious. Their period-orchestra accompaniment is equally different, Bartoli’s displaying far more of a tangy, early-music edge. I wouldn’t want to be by my fireside without either version. And I certainly wouldn’t want to be without Gauvin’s disc, whose warmth will make any Baroque music lover (or indeed any vocal music devotee) one happy holiday camper. 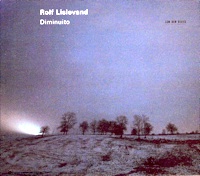 Many more listeners than early-music lovers will delight in this collection of madrigals, chansons, and instrumental music from the 16th century. In pristine sound, Rolf Lislevand’s lute and vihuela (a 16th-century guitar with six or even seven strings) join with a colorful assortment of authentic instruments that includes triple harp and percussion. The voices of Linn Andrea Fuglseth and Anna Maria Friman, both of Trio Mediaeval, add to the joy, embellishing melody lines with all we know about early-music performance practice. This CD gives you a novel way to dance before the Yule log. 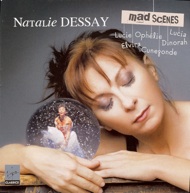 Are thoughts of holiday shopping driving you crazy? There’s no better accompaniment for wrapping the presents than Natalie Dessay’s collection of mad scenes from operas by Gaetano Donizetti, Vincenzo Bellini, Ambroise Thomas, and Giacomo Meyerbeer. If you find yourself obsessed with the photo of the French coloratura soprano in a bloody dress, drop your scissors and immediately play her hilarious live recording of Bernstein’s “Glitter and Be Gay” from Candide.

What, you may ask, is that madcap song doing on an album of mad scenes? Well, I suppose it has as much right to be there as does Puccini’s “O mio babbino caro” on Diana Damrau’s COLORaturaS album, due out from Virgin Classics in January. Opera lovers will have a field day comparing the two sopranos’ extremely different versions of the Bernstein and the Thomas, then taking sides and duking it out. Well, so there is a reason to live beyond Christmas!

Derek Bermel: Voices (BMOP Sound 1008) Gil Rose’s Boston Modern Orchestra Project (BMOP) is a godsend for contemporary music fans and their curious cohorts. Billing itself as “the nation’s leading orchestra dedicated exclusively to new music,” it has released a thrilling series of sound recordings, which now totals 17 discs. Especially recommended is this fabulous, Super Audio CD of music by composer/clarinetist Derek Bermel. If Voices, For Solo Clarinet and Orchestra doesn’t have you jamming by its end, it may be time for a one-way ticket to Valhalla. 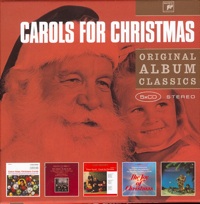 For those who crave a new version of Handel’s Messiah, I’d choose between two recent issues. The 31-voice chorus Polyphony performs the almost-final 1750 version, along with the Britten Sinfonia, conducted by Stephen Layton (Hyperion CDA 67800). From 2006 comes the 1742 Dublin version in an even better-recorded, period-instrument version from the 13-voice Dunedin Consort and Players, directed by John Butt (Linn CKD 285). Butt opts for two contraltos in place of Layton’s countertenor; his version is also available as a high-resolution Studio Master download from linnrecords.com.

If you prefer traditional Christmas music, look no farther than the beautifully voiced Carols by Candlelight from the Choir of Magdalen College, Oxford, conducted by Bill Ives (Harmonia Mundi HMU 907495). This excellent recording features men and boys singing everything from plainsong and Palestrina to Britten and Vaughan Williams.

Eileen Farrell - It Came Upon a Midnight Clear:

Gift Boxes Galore By minimizing packaging weight and dimensions, shrinking liner notes, and sometimes even dispensing with translations, record companies have been issuing box sets at bargain prices. There are so many new boxes, in fact, that the online music store ArkivMusic has assembled an entire list, which for some reason omits EMI Classics’ fabulous Ikon series of vocal reissues. They also have posted a list of holiday music, none of which honors religions or spiritual practices of the non-Christian variety. 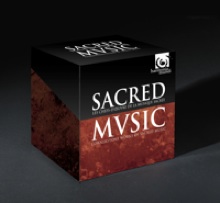 Of all the new boxes, Harmonia Mundi’s 30-CD Cornerstone Works of Sacred Music has me cheering the loudest. Complete with a thick, program-notes booklet and a CD-ROM containing complete texts and translations, it’s filled with superb performances that range from early Christian chant to Bernstein’s Mass. Philippe Herreweghe’s heart-touching Fauré Requiem tops my list of the many gems in the box. Additional gifts come from René Jacobs, Ensemble Huelgas, Cantus Cölln, Ensemble Clément Janequin, William Christie, and other early-music specialists. This set is so reasonably priced that you can give it to yourself without guilt.

The four CDs in Rautavaara: Concertos, from Ondine, will expand your love for the 81-year-old Finnish composer’s oeuvre far beyond his wondrous, best-selling “Cantus Arcticus” Concerto for Birds and Orchestra. Three concertos for piano and orchestra (played by dedicatees Ralf Gothóni and Vladimir Ashkenazy) join others on violin, cello, double bass, harp, flute, and clarinet (with its dedicatee, Richard Stoltzman). There’s also a concerto for the unusual combination of organ, brass quintet, and symphonic wind orchestra, plus a Ballad for Harp and Strings.

If you really like to buy sets (saves shopping time!), contemplate 111 Years of Deutsche Grammophon (55 CDs, on sale for less than $3 per CD); or the 50 CDs of violinist Yehudi Menuhin: The Great EMI Recordings for less than $1.50 per disc; or DG’s 46-CD Brahms Complete Edition; or the extremely mouthwatering Milestones: 30 Years of Chandos (30 CDs for a little over $2 each); or, for the starstruck with money to burn, Sony’s deluxe Yo-Yo Ma: 30 Years Outside the Box, which includes every commercial recording from the famed cellist, accompanied by two discs of rare and previously unreleased material, as well as a 312-page hardbound-cover booklet. 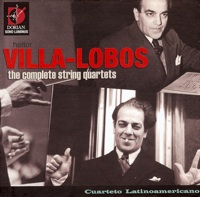 Myself, I’d spring for a 6-CD box not on the ArkivMusic list: Villa-Lobos: The Complete String Quartets (Dorian Sono Luminus DSL-90904). Definitively performed by Cuarteto Latinoamericano, these 17 quartets are ablaze with vigor, color, and an incredible variety of expression. Complete with a bonus DVD that includes Villa-Lobos’ first string quartet from 1915 and an interview with the artists, this technicolor set is a special treat.

The set contains several surprises, not least of which is that the first CD lists 12 tracks, while I’m currently listening to track 14. (Hmmm.) I don’t know what I’m listening to, but one of the mystery tracks is heart-touching, and the other indulges in 1950s spikiness while brimming over with melodic invention.