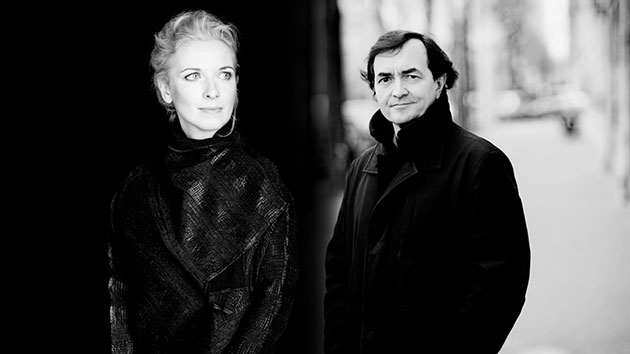 On the eve of composer and conductor Pierre Boulez's 90th birthday, pianists Pierre-Laurent Aimard and Tamara Stefanovich bring an all-Boulez program to Zellerbach Hall at UC Berkeley on March 12.

The duo, known for their expertise in Boulez, will play a program of seminal piano works by Boulez, who will turn 90 on March 26, which include the rigorous Structures, Book Two, and Notations.

While Aimard is no stranger to San Francisco concert audiences, the Zellerbach Hall appearance marks his Berkeley debut and that of Stefanovich, his professional and personal partner.

Aimard's rich history with Boulez goes back to 1976 when at age 19, at the French composer's invitation, Aimard became a founding member of the Ensemble Intercontemporain, Boulez' IRCAM-based chamber orchestra in Paris. Aimard, 57, played with the group for many years in a number of major premieres.

Reached by telephone in Paris, Aimard said he never wondered if his career might have followed a different path had he not met Boulez. "The direction was very clear at the start," said the Lyon-born musician. "I wanted to play old and new music, and I'm still doing that."

"I wanted to play old and new music, and I'm still doing that." – Pierre-Laurent AimardAs a pianist Aimard has worked with 20th-century composers of complex pieces requiring virtuosity at the keyboard. His long association with György Ligeti included recording his complete works for piano. Aimard premiered Elliott Carter’s final piece: Epigrams for piano, cello and violin, which was written for  him, and performed the year after the Pulitzer Prize-winning composer's death at age 103 in 2012.

Aimard is also known for his interpretations of classical works. His debut recording for Deutsche Grammophon in 2008 of J.S. Bach's Art of Fugue was a top-selling CD and iTunes classical hit.

The son of a neurologist, Aimard's early musical talents brought him at age 12 to the attention of pianist and teacher Yvonne Loriod. He moved to Paris to study with Loriod, the second wife of composer Olivier Messiaen, and lived with the childless couple, jokingly referring to himself as their "adopted son." Much earlier, Boulez had studied with Messiaen and with René Leibowitz.

Aimard has described Loriod's approach to teaching piano as creating the right sonorities for Messiaen's music. "It was not traditional, but I liked it because it was strong," Aimard once told an interviewer.

Aimard went on to study with Marie Curcio in London and sought out composers such as Ligeti in Eastern Europe.

"Certainly, a great teacher has a big influence," said Aimard, carefully offering his thoughts, "but in the end the greatest influencer is the creator."

Boulez is known for continuing to revise works once they've been peformed publicly. Since the 1970s, Notations, an early work (1945) of 12 fragments for piano, has been expanded as an orchestral cycle. Incises, a short work for solo piano, has developed into Sur Incises for three percussive groups (pianos, harps, percussion) in two extended movements.

Aimard cautions that it's a misunderstanding to think of the newer versions as just revisions. "It's not just revising, it's a compositional process in different ways." The 12 piano fragments that make up Notations were "starting points" for the orchestral cycle, explained the Berlin-based pianist.

"It's really starting from a previous statement and developing a completely new piece. It's so much more developed and in a completely different dimension," said Aimard.

Boulez sometimes used a process that he termed controlled chance to compose scores. His method differs from that, say, of the late composer John Cage, who employed chance to allow performers to improvise. Boulez, by contrast, often offers performers the choice between possibilities that he's detailed.

"Boulez, even if he leaves the interpreter many choices, wants to have final control of the identity of his piece," said Aimard. "With Scriabin everthing is defined. But with Mozart, sometimes he doesn't put in a cadenza. So if you play a Mozart reprise, there is a certain flexibility."

Aimard noted the gap between Mozart's version of open form and how the generation of Cage, Karlheinz Stockhausen, and Boulez employ it. "[They] felt this need to open the space for the interpreter to decide certain things himself," said Aimard. "In Boulez' Third Piano Sonata, he opens the form. You can choose the order of movements. You can choose to play the parentheses, or not to play them."

As well in Boulez' Constellation Mirroir, the interpreter can choose the order of sequencing. It's not every pianist's cup of tea, Aimard agreed. "It's a certain way to be an interpreter. I like to have the freedom in a stylistic frame."

Though more often thought of as a conductor now, Boulez is unquestionably a significant composer. "I would need a book," said Aimard, with Gallic graciousness when asked to describe Boulez' legacy in a Twitter tweet.

Aimard's admiration for Boulez extends to the composer's humanity. "Although he was very famous, and a very influential person, I was always amazed by the respect he had for the human beings he had around him," he said. "No matter what their role would be.

“I was always amazed by the respect he had for the human beings he had around him, no matter what their role would be.” – Aimard on Boulez"He gave so much of his time building things for others, like IRCAM. It's very rare that a creator has such generosity."

On Friday, March 13, as part of Aimard's residency at the university, there will be a master piano class from 11 a.m.-1 p.m. , in 125 Morrison Hall, featuring student pianists playing works by Boulez, Maurice Ravel, and Messiaen. And from 3-4:30 p.m., also in 125 Morrison Hall, Aimard will be in conversation with Cal Performances Executive Director Matías Tarnopolsky. Both events are free and open to the public.

Later this spring with Klavier-Festival Ruhr and Vincent Meyer, Aimard will launch an online project centered on the performance and teaching of Ligeti’s piano music, featuring master classes and performances of the Etudes and other works. Stefanovich recently launched an online and interactive pedagogical project together with the Klavier-Festival Ruhr that analyzes scores of the Boulez Notations.

What's more in June the Boulez celebration continues as part of Ojai at Berkeley, when Steven Schick conducts the International Contemporary Ensemble with mezzo-soprano Peabody Southwell in A Pierre Dream, with a stage set designed by Frank Gehry.