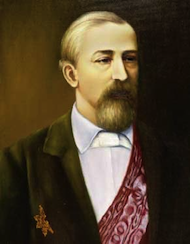 A lot of great musicians are math/science oriented, so it shouldn’t surprise you that there are a few composers, like today’s birthday boy, Alexander Borodin, who had a hard time choosing between music and science.

Probably the most famous fact about Borodin is that he was an actual chemist, a tenured faculty member at the St. Petersburg Medical-Surgical Academy. He liked it, although he was frustrated that Western Europe, particularly Germany, was investing so heavily in the science behind the second industrial revolution (driven, in part, by advances in chemistry), while Russia was being left behind.

Oddly, Borodin couldn’t become a professional composer in the Russia of his day. For one thing, there were no music conservatories in Russia at the time. And for another, the Russian monarchy (the tsars) didn’t recognize Russian composers as professionals, so they were not eligible for pensions and were unlikely to be hired by the imperial theaters for important commissions. The result was that Borodin and others of his generation (Modest Musorgsky and Nikolai Rimsky-Korsakov among them) all had day jobs and did composing on the side.

Borodin’s heavy workload at the Academy certainly cut into his composing time, and he never came close to finishing his major work, the opera Prince Igor, which we now hear in an edition created and finished by Alexander Glazunov and Rimsky-Korsakov. But his melodic gifts are on display in the parts of Prince Igor that he did finish, most famously the “Polovtsian Dances,” the symphonic poem In Central Asia, the Nocturne from String Quartet No. 2, and the Symphony No. 2 in B Minor.