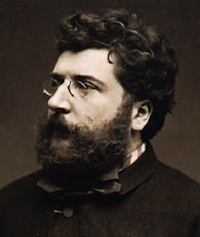 Some composers are famous for just one piece of music. That’s not quite true of today’s birthday boy, but it’s close enough. In the opera Carmen, Georges Bizet created one of the world’s most enduring blockbuster hits.

Carmen is always the second or third most performed opera in the world, year after year. In 2012, it was produced at least 477 times. But it also has been translated into dance, other music theater shows in dozens of languages, more than 70 movies (including Robert Townsend’s Carmen: A Hip Hopera (2001), instrumental works (like Pablo de Sarasate’s Carmen Fantasy for violin), and thousands of pop culture references.

So Bizet could have rested on his laurels after creating this opera — except that he died three months after the premiere.

Bizet is one of the great masters of melody: His L’Arlesienne Suite is a staple of the orchestra repertory, and the duet “Au fond du temple saint” (In the depths of the holy temple) from his opera The Pearl Fishers is another inspired tune. Read more about Bizet, listen to music, watch video, and discover fun facts (including his real given name) in SFCV’s Composer Gallery.